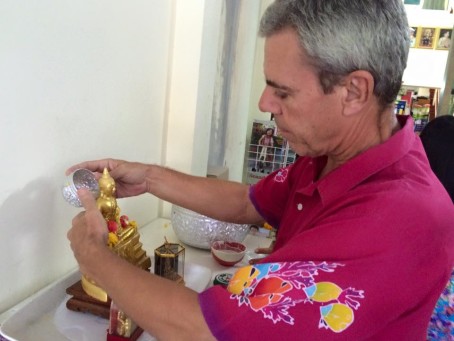 The company has adopted a Thai family tradition, where the eldest members of the family are revered by the yonger and in return receive the blessing from the elder members.

Founder and CEO Gregers Moller gave the company Buddha statue its yearly wash down with scented water. Then one by one according to age the staff poured water over his hands wishing him well in the new year. In return, the CEO said a few personal words to each member of the staff about the past year or the time to come and put gently a bit of powder on both their cheeks.

When all have had a chance to wish each other a happy and prosperous New Year, the formal celebration is usually followed by a more lively general splashing of each other with water.

The office closed early to allow for members of the staff to start their yearly travel home to their families outside of Bangkok. There, the big water battle will rage over the weekend and into Monday and in some places include Tuesday as well.

On Thursday, Scand-Media office will open after Songkran, allowing for Wednesday to return to Bangkok, but many staff members have taken personal leave and will not return to work before Monday 20 April.

Songkran is about cleaning, purification, and fresh starts. Houses are cleaned, Buddha statues are gently washed with scented water, and elders are honored by pouring water respectfully over their hands.Although the origins of Songkran are far more religious, splashing complete strangers with water has become the main attraction of the festival.

Dousing or sprinkling people with water signifies the washing away of bad thoughts and actions, and brings them good luck in the new year.As a procession and formalities end, a throng forms in the street to dance, party, and throw water in good-natured fun. To up the ante, many Thais add ice to their water or travel in teams that wear masks and carry large water cannons. You probably won’t mind the drenching; afternoon temperatures in April regularly rise above 100 degrees Fahrenheit.

The first splash mayn be inconvenient, but once you are wet it is indeed fun and a great way to escape the scorching temperatures in April — the hottest month of the year.

Songkran was once based on the lunar calendar, however, now the dates are fixed. The Thailand water festival officially runs for three days starting on April 13th and finishing on April 15th. .

SGD 25,272 collected for the marine environment through this year’s Nordic Green Run!

Time to read something about Scandinavian history in Thailand

Book: In Memory of the Tsunami in Thailand

Book: From the Time of the Crocs

Norway and Iceland, along with other EFTA countries, sign free-trade agreement with Thailand