On 8 March 2017 the Swedish EU Commissioner for Trade, Cecilia Malmström visited Singapore and met with several of the country’s ministers.

In her blog the EU Commissioner wrote that she had discussed the free trade agreement that had been concluded between the EU and Singapore. “Once in place, it will remove nearly all customs duties and get rid of overlapping bureaucracy, improving trade conditions for goods like electronics, food products and pharmaceuticals. It’s also designed to stimulate green growth, removing obstacles to trade in green technology and creating new opportunities in the field of environmental services.”

“At meetings with Ministers here today, we reiterated our commitment from both sides to having the agreement in place soon. We intend to engage with stakeholders to make sure that the agreement can be ratified and enter into force as early as possible, so that we can start reaping the benefits. On the EU side, we are awaiting a verdict in the European Court of Justice about what the ratification process for this trade deal will look like. Hopefully, the Court will have their say in the first half of this year.” 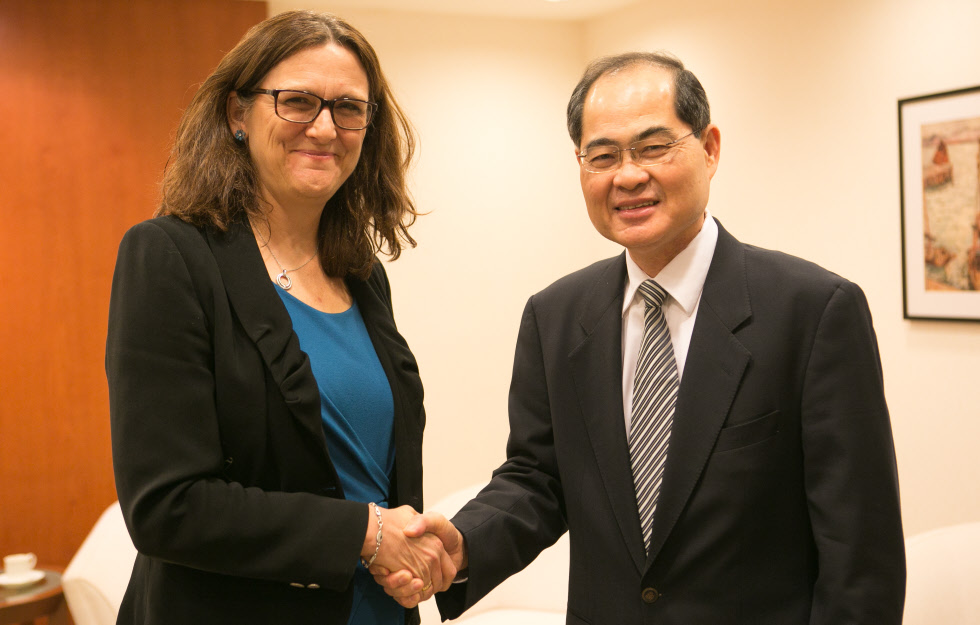 Singapore’s Minister for Trade and Industry (Trade) Lim Hng Kiang and EU’s Cecilia Malmström reiterated their commitment to a swift entry into force of the free trade agreement between the EU and Singapore.

“In a time of rising protectionism in many quarters of the world, we look forward to the entry into force of the EU-Singapore trade agreement. It will open doors and create opportunities for companies big and small, help to boost economic growth and investment, and create jobs. Our trade agreement is a key element in the EU’s pursuit to further strengthen our trade relations with Southeast Asia. Together with our agreement concluded with Vietnam and those under negotiation with other Southeast Asian countries, we are building new bridges to our most important trade partners,” stated the EU representative. Eddy NG, Managing Director of Singapore Terminals 2, with Cecilia Malmström, during her visit to the Port Authority of Singapore in Singapore. Photo: Danial Hakim

“Singapore and the EU are longstanding partners who share a firm belief in free and open trade on a rules-based global trading system. The EUSFTA will reinforce our efforts to remain open and connected, and strengthen our robust economic relations with the EU. The early ratification of the EUSFTA will demonstrate the EU’s resolve as a key player in the global trading system and send a clear signal about the EU’s commitment to step up its engagement of the region. It will also allow both Singapore and EU companies to tap on numerous growth and collaboration opportunities in Asia and Europe,” said Minister Lim.

“The EU and Singapore share a strong commitment to free and fair trade. We have many common interests, and among other things we had the chance today to discuss ongoing international efforts to reform investment rules,” said Commissioner Malmström. “Every year, here at the port of Singapore, enough cargo containers are handled to reach halfway to the moon. Coming from a port city myself – Gothenburg, on the West coast of Sweden – I’ve seen my fair share of shipping, but this was truly in a league of its own. Impressive.” she writes in the blog.

“Singapore is a tiny island nation without natural resources. Yet, it’s one of the world’s richest countries, largely thanks to its deep and unflinching commitment to free and open trade. Its port – indeed, in terms of transshipments, the busiest in the world – takes in 140.000 vessels yearly.”

Swedes in Myanmar can vote at the Swedish Honorary Consulate office