The Friends of the ECCC is a group of major donors, including Sweden, supporting the ECCC since its inception. It is based in Phnom Penh. On August 7, the group issued a statement:

“We, the Friends of the ECCC, welcome the further progress that was made in the judicial process of the ECCC by today’s delivery of the verdict in case 002/01 against 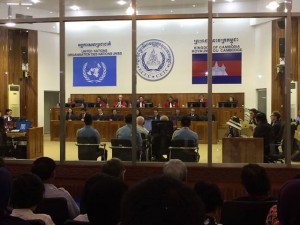 former senior leaders of Democratic Kampuchea, Nuon Chea and Khieu Samphan who were found guilty of crimes against humanity and sentenced to life imprisonment.
Today’s verdict represents a major milestone in the important work undertaken by the ECCC, not only to bring justice to the victims of the Khmer Rouge regime but also to strengthen accountability and the rule of law in Cambodia. This judicial decision is also significant in that moral and collective reparations for the victims of these gross and systematic violations of human rights have been granted by the court.
We are proud of having assisted the work of the ECCC, together with the Royal Government of Cambodia, the Cambodian people and the international community. We hope to see the remaining work of the court progress efficiently in accordance with standards of international due process and in support of the successful completion of its mission.
We note that further proceedings in case 002, covering some of the most significant charges, have just started. On this occasion, whilst reiterating our commitment to support the ECCC’s mandate, we call on other potential donors to contribute financially to the ECCC so that it may enjoy a broader and sounder financial base.”

Source: Embassy of Sweden in Cambodia