The company has a 75% operated interest in the surrounding PM307 license, which also contains the Tembakau gas accumulation. Lundin expects approval for its plan later this year. Bertam is expected to deliver first oil in 2015 and peak at 15,000 b/d. 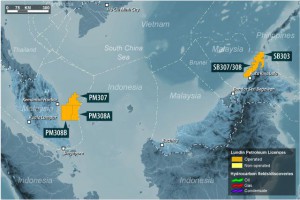 Block PM307 covers an area of approx. 6,126 km2 and contains a proven oil discovery. In Juni 2011 Ashley Heppenstall, President and CEO of Lundin Petroleum, is quoted for saying this about the options in the area:

“The signing of this Block marks a further important step forward in Lundin Petroleum’s pursuit of organic growth opportunities in Malaysia and South East Asia. We are particularly encouraged by the recent announcement made by the Malaysian Government regarding fiscal incentives for small fields that when implemented could accelerate commercialization of the proven discovery that exists within the Block.”