Social workers in a wealthy Copenhagen neighbourhood have begun making house calls to wake up students with high rates of absenteeism, sparking accusations that Denmark’s welfare state has become too intrusive. 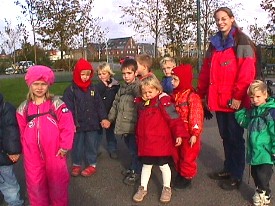 “There have been conflicts, but the people we’ve sent out are trained to handle situations like that. Of course there’s been resistance,” said Barbro Lundqvist, a social worker in the upscale Oesterbro district.

After a one-year trial, 33 percent of the targeted children, who were between seven and 15 years old, had begun attending school regularly.

Around 80 percent of them had already been in contact with social services for other reasons.

“Obviously there is a problem in the family when you have a high level of truancy, so these aren’t ordinary Oesterbro families we’re talking about,” Lundqvist said.

“We have to do what is best for the children, and we may not have time to solve the parents’ problems here and now,” she added.

For some children, a phone call was enough to get them out of bed, but in most cases the social workers had to come into their homes and make sure they got up.

Lundqvist said the daily visits were “a form of tutoring” for the parents, and that the aim was to gradually let them take over the job of waking up their children.

Not everyone was impressed with the project, which has now been made permanent and is set to be implemented in other parts of Copenhagen.

“If Denmark is a welfare state, Oesterbro is a microcosm of extreme welfare,” columnist Tom Jensen wrote in daily Berlingske.

“There is nothing left to fight for… and if we can’t get up in the morning, someone from the municipality will come and wake up the little ones,” he wrote.

His views were echoed by a local politician for the Liberal Alliance party, Heidi Wang.

“Where are the friends, where are the volunteers and everyone else? We can’t outsource our personal responsibility to the municipality,” she told the newspaper.