On 31 March 2016 NIST International School in Bangkok, Danes Worldwide and the Ambassador of Denmark signed a Memorandum of Understanding with the intent of exploring a Danish language programme that would be open to all Danish expatriates in Thailand. 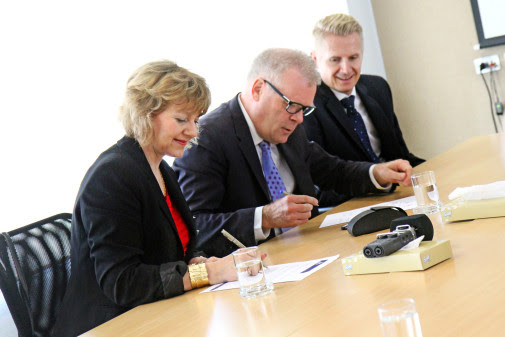 Danes Worldwide, established in 1919, has spent nearly a hundred years supporting its citizens living abroad through education and public engagement. In the 1980s and 1990s it began expanding its programmes, launching the annual Danish Summer School in various locations worldwide and also offering online language lessons. By striving to support its global community, particularly through language and education, Danes Worldwide has enriched their shared cultural heritage.

This ideal is shared by NIST, which promotes community and growth as two of its core values. As expressed by Deputy Head of School Brett Penny:

“Language serves as the foundation for every international school”.

NIST believes that language represents more than simple communication; it is a means to bridge cultures and foster peace through dialogue and shared understanding in line with the International Baccalaureate’s aspiration to “build a better world”. Through the World Language Programme at the school, students can learn over 15 languages, either as a mother tongue, or as second or third languages.

Recognizing the significance of these shared values, NIST Head of School James MacDonald; Deputy Head Brett Penny; His Excellency Mikael Winter, Ambassador of the Royal Danish Embassy in Bangkok; and Anne Marie Dalgaard, Secretary General of Danes Worldwide met at the school to sign the Memorandum of Understanding. Following the signing, the ambassador, secretary general and other guests met several of NIST’s young Danish speakers and toured the school’s World Languages Centre, which was purpose-built for collaborative, engaged learning.

In addition to providing the Danes in Bangkok with the opportunity to learn their mother tongue, this partnership opens the door to exploring similar programmes for other cultural groups. As recognized by NIST and Danes Worldwide, the challenges facing nations around the globe require not only the ability to communicate with others, but also mutual respect and understanding. By providing Danes in Thailand with the ability to connect to their language away from home, both organizations will take the first step toward building a center for cultural exchange and dialogue in the region.

Learn more about NIST at nist.ac.th and Danes Worldwide at danes.dk.