She started by sharing baby food recipes with busy mothers online. Soon after she was selling her products in Danish super markets. Now she is about to start exporting her organic baby food to China. Christina Hansen, founder of Christina Hansen Organics, found her passion and success in making baby food of natural and simple ingredients.

Baby food entrepreneur Christina Hansen was running a baby’s development class in Copenhagen, Denmark when she discovered a gap in the market. All the mothers were bringing sticky goop on jars disguised as lasagne or beef with pees, which they could just pull out of their bags and feed their babies with after the classes. It was all highly processed food containing lots of starch among other things. Food that had to be heated to 125 degrees Celsius in order to kill all bacteria. Christina saw a lack of focus on the quality raw commodities and good taste in the food for the little ones.

Christina herself had two small children at the time, but had never herself bought the jars of baby food and served it to her children.  She had always made it herself. A lot of the mothers in her classes were always complaining about how time consuming it was the make the baby food themselves, which at first made Christina decide to start her own blog, where she shared her recipes, making it a bit easier for others to make good and healthy food for their babies. At that time, around 2013, porridge had become a very popular food in Denmark and that was a big inspiration in Christina’s experiments with creating new recipes. She had become amazed at how good something made from such simple ingredients could taste so good, and started to wonder why on earth people were still serving such highly processed goop to their babies.

One day, as Christina was experimenting with porridge recipes in the kitchen, one of her friends stopped by. Her friend was really impressed after having a taste of the porridge and encouraged Christina to try and sell it. Although Christina was sceptical at first, the idea slowly began to grow on her.

Soon after she started a process of installing a professional kitchen in her basement, making sure everything matched the regulatory requirements and standards. She set up a website, designed labels and came up with the name Smiley Rainbow. And soon she was selling out of her products online.

“Logistically it was a bit difficult, because the fresh food had a short durability of only 5 days, so I was just sort of driving around Copenhagen and delivering it myself.” 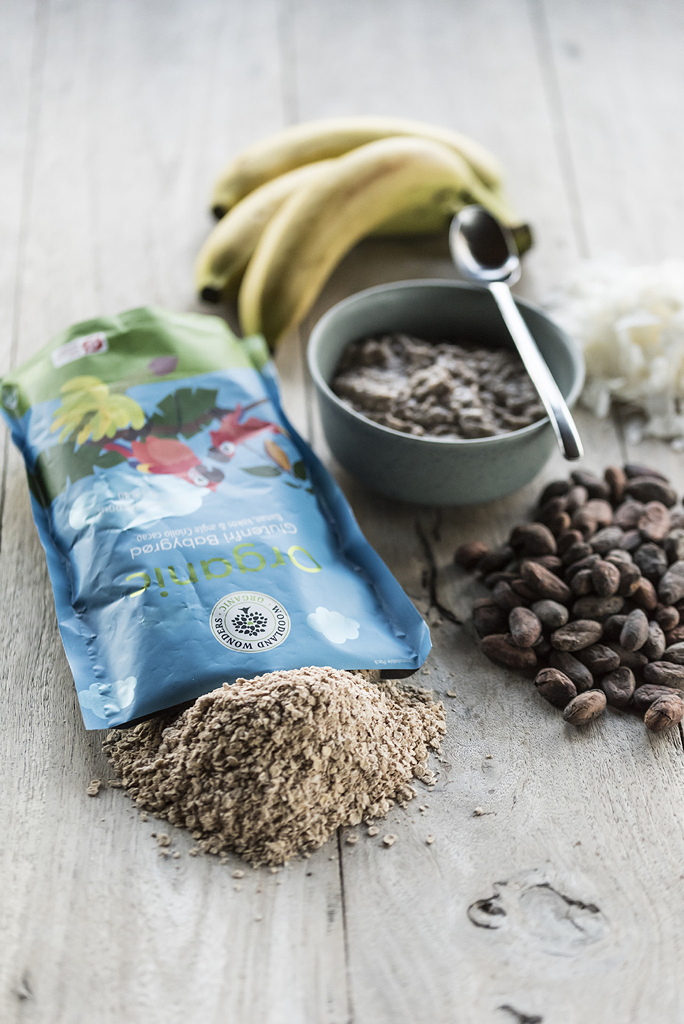 Christina had never expected that any super markets would actually be interested in her products, but being part of the Danish Organics Union, Økologisk Landsforening, she was invited to display her products to a big Danish super market chain called Super Brugsen in 2014.

To Christina’s surprise two of the big stores in Copenhagen were interested in selling her products.

With a background as a lawyer, Christina would say she has had some advantages when starting her own company. She was able to read and understand all of the legal stuff that must be met when starting a food producing company. But when it came to presenting baby food to super markets, Christina didn’t have much clue about what she was doing.

“I remember the man who represented one of the stores came up to me, took a look at the product and said; ‘These don’t have barcodes.’ I had never even though about that. When he asked about the price I was like; ‘I don’t know. What do you think?’ I had no clue at all. Luckily, I’ve learned a lot since then,” says Christina. Although the super markets gladly received Christina’s fresh baby porridge, it was still a problem with the short durability, so Christina decided to experience and work on ways to expand the durability. But she never got to that. Suddenly her powder porridge mix took of. It was easy to just mix with some water and the baby’s usual type of milk, and then you had fresh and tasty porridge. And so it became her focus point and with a durability of one year, it was also easier for the super markets to carry.

From Smiley Rainbow to Woodland Wonders

As the popularity of the Smiley Rainbow product for small babies grew, parents began asking Christina for more. Their babies were becoming too old for Smiley Rainbow’s finely blended porridge and needed something with more texture. This was when Christina developed the idea of Woodland Wonders for babies seven months or older.

While Smiley Rainbow had been a very fruity porridge, Christina decided that Woodland Wonders should be more inspired by the food of the forest. With mushrooms, wild garlic, cocoa and delicious herbs among more, she wanted to create gourmet food for the bigger babies with even more taste and texture.

Today she has merged the two brands and Woodland Wonders offers both the fine fruity porridge for small babies and the food for bigger babies. Christina still insist on keeping everything natural. Most of the product contain only five ingredients, oats, fruit, vegetables and herbs. And then some vitamin b, because that a legal requirement for baby food. 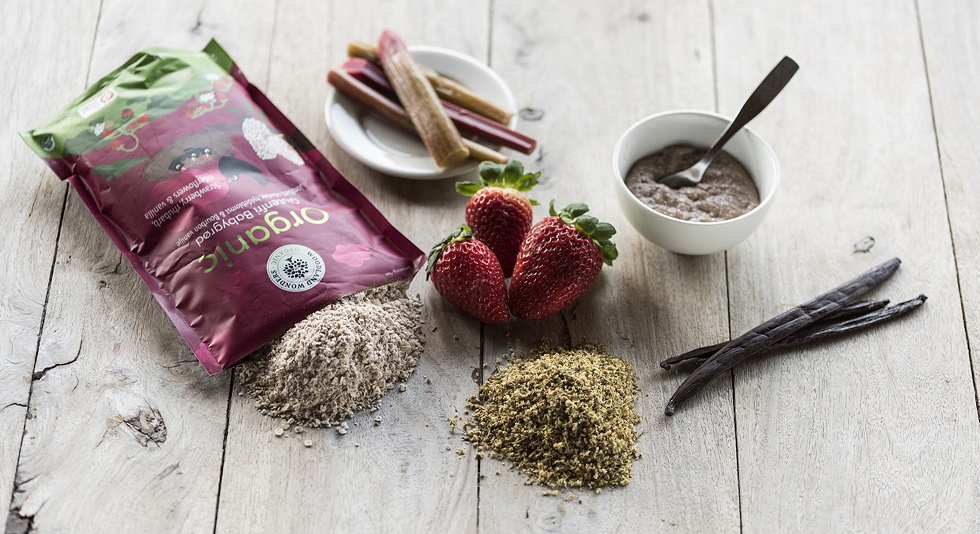 For her, it’s important that the porridge is exactly what the label says it is. After once buying some millet porridge for herself, she looked at the label and saw that it mainly just consisted of wheat, so the food was just full of gluten, which Christina does not think is very healthy for the little ones, which is why she has also chosen to keep her products gluten free.

“Babies are just such a tiny little new system that is under development and have never tried food before. They should not be fed with lots of overly processed stuff. They should have something simple. Something that is easy for the body to recognise.”

At a recent trade fair for organic food hosted by Biofach in Germany Christina’s products were discovered widely outside the Danish borders. Christina explains excitingly how all the Europeans countries have shown interest in distributing her product, but the first step will be China.

Working together with the Danish organic dairy Thise on a new product, a Chinese owner of 7500 baby product stores all over China showed a big interest in Christina’s products. Because infant formula is so expensive in China, the Chinese customer only wants product which already contains milk powder so they will only have to add water. So Christina and Thise is working on developing the right product for them and expect it to be ready in April 2017. Although she does not expect to have her product out in Chinese stores before autumn.

“There are strict laws for organic product in China. Everything organic imported to the Chinese market must be certified by the Chinese authorities. It should not be a problem, but it will take some time,” says Christina.

Thise Dairy has worked with the Chinese customer before and have been exporting to the Chinese market for some time. Christina says she is very happy to be working with an experienced partner.

“At this point I would not say I have experience enough to be able to do this myself.” In China Eleven million babies are brought into the world every year. And parents have now been allowed to not just have one, but two children. So China is not just a big market for baby food, it is also a market in growth, which makes it a very lucrative market for baby food companies, creating a tough competition.

Christina hopes her perfectionism and personal engagement in the products will create a success in China like it has in Denmark.

“I am very perfectionistic with these products, because I stand behind them personally. That is also why we have our phone number on the products, so customers can contact us directly. I’ve also got my picture on the new bags to show that I am 100 percent behind this. I put my head on the block when it comes to guaranteeing the quality.”

Taking the world by storm

In 2017 Christina Hansen hopes to not only start exporting to China, but to four or five other countries within Europe too. She has already started exporting to Norway, but is currently working on getting back to all of the potential buyers who contacted her at the Biofach fair in Germany. One day she hopes to be able to get her product out in the USA too.

Christina Hansen Organics and Woodland Wonders have already accomplished much more than Christina would have ever dreamt of, but she keeps on dreaming and fighting to make more of her dreams come true.

“I hope to get the opportunity to take the world by storm with these products.”