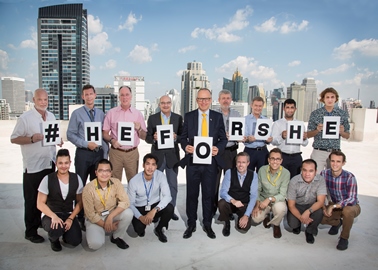 Gender equality is often seen as a fight for women by women, but without support from men, it will be impossible to advance women’s rights and end the discrimination as well as violence against women.

The #HeForShe campaign is a solidarity movement for gender equality, and brings together one half of humanity in support of the other half of the humanity, for the benefit of all. Almost 10,000 Swedish men have already joined the movement. The Embassy hopes that in the next few months at least 10,000 Thai men will also have done so.

In partnership with UN Women, the Teamwork Arts has made the #HeForShe campaing as a lead up to the 20th Anniversary of the Beijing Declaration and Platform for Action on Women.

If you want to support the HeForShe initiative and the Embassy’s effort to boost support in Thailand, you can make your commitment on www.heforshe.org