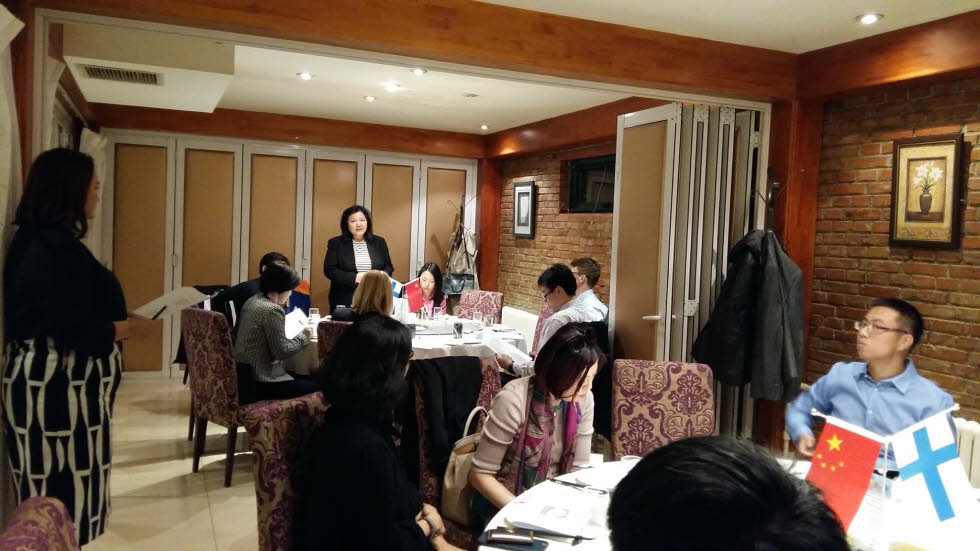 The meeting was led by Chairman Mrs. Erika Gronroos, who went over the activities of the last term. The meeting was delighted to hear that FBCB activities had increased from the previous term and especially events together with other Nordic Chambers had brought more activities to FBCB members.

Also, the number of members grew during last term: FBCB currently has a total of 33 Corporate Members. In order to further increase the member base the AGM approved a new member category, a Joint Membership for Large Companies together with Finnish Business Council Shanghai.

Despite growing activities, financially FBCB continues on a good path with the term 2015-2016 ending up with slightly positive result. By far the most financial funding comes from membership fees, which is supported by the large number of hours the Board of Directors members invest in planning and executing FBCB activities. While Ms. Nina Ping has been doing a superb work as the Coordinator of FBCB, during the AGM it was announced that former Board Member, Mr. Juha Tuominen, will take the role of Executive Director, and together with Ms. Ping work to continue further developing FBCB activities.

Also, Ms Tarja Kangaskorte, Deputy Head of Mission from Finnish Embassy in Beijing brought greetings from the Ambassador and the whole Embassy for the FBCB members. FBCB members received thanks for their active participation in the Team Finland activities as well as a welcome to approach the Embassy either with faced challenges or with stories of success. The new Board for 2016-2017 was selected by the AGM to include the following five members: Erika Gronroos (Vaisala), Juha Kolmonen (Nokia), Yuan Xiaoyu (UPM), Caroline Xue (Marja Kurki) and Arto Mustikkaniemi (Tekes/Team Finland). The last two are new members for the FBCB board. The division of work inside BoD will be decided when the new BoD convenes for the first time. Finally, at the end of the AGM FBCB rewarded Mr. Seppo Selkala with a Certificate of Appreciation for his long-standing support for FBCB and its member companies both as Head of Finpro Beijing and as former FBCB Board Member.