Over the weekend 16 – 17 April China’s State Counsellor Yang Jiechi was on official visit to Denmark.

On Sunday 17 April, he was received in audience by Her Majesty Queen Margrethe II at Fredensborg Castle.

A meeting between Foreign Minister Kristian Jensen and the State Counsellor was held on Saturday 16 April to discuss the partnership between Denmark and China, human rights, the regional situation in Asia as well as the development in Ukraine, Syria and Afghanistan.

Foreign Minister Kristian Jensen emphasized the strong ties between Denmark and China, and noted the potential for future collaboration between the two countries. 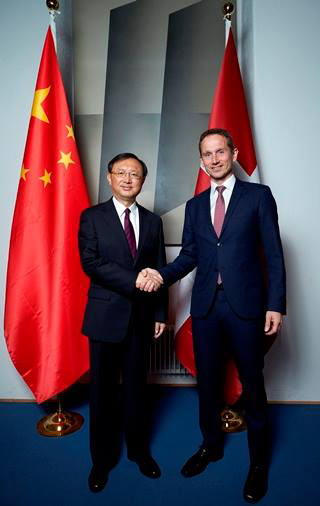 “China was one of the first countries I visited as new Foreign Minister, and State Counsellor Yang’s visit in Copenhagen is another strong testimony of the good and close collaboration between Denmark and China. We must continue to build and develop this collaboration, which is why we have taken stock on our strategic partnership from 2008 today. We have discussed how to work even closer within the areas of energy, innovation and food safety, where Danish companies and authorities have expertise, which is sought after by Chinese parties,” Minister Kristian Jensen said.

“Naturally, we discussed the development in Syria, North Korea and Afghanistan, for instance, and we have had an honest dialogue on the development in China, including human rights. Our meeting confirmed that Denmark and China have a special relationship and I will work actively to build on our common interests.”