It is certainly not uncommon that tourists return to the same destination and hotel again and again on their vacation. But to repeatedly visit a relatively unknown island in Malaysia all the way from Sweden stands out. The Larsson family has done that – six times so far. Perhentian Islands is their destination of choice, actually situated just south of Thailand’s border on the east coast of West Malaysia, thus pretty close to much more known holiday destinations, but much more unknown. ScandAsia finds out the secret behind why this island group is such a draw to them. The Larsson family’s love affair with Malaysia started many years ago, in 1997, when the then young couple arrived to Borneo for adventures, and also, for their first time, ended up on the Perhentian Islands for relaxation at the end of a three-week trip. At that time Ann and Jonas did not yet have children. Now they have three.

They had previously also been to Thailand, in 1992 – just about when Thailand’s charter tourism started to take off.

“There‘s certain difference,” thinks Jonas, as we meet up in Kuala Lumpur, a stop-over that that have been added to their itinerary for their two most recent trips to Malaysia. “We travelled there at very young age. And possibly we should have returned to Thailand with the children but instead it became such a rush to travel there. So it felt very ordinary,” adds Ann.

“And we like Perhentian Islands and the opportunity to stay comfortably on its larger island called Perhentian Besar,” says Ann, which makes it sound like an understatement, given that it has become such draw for them.

Perhentian has since then also become an attraction for more visitors, but the fact that the island group is only open seasonally puts a lid on any uncontrolled, unwanted expansion. Most resorts are closed between October to March and there are no direct international flights to the area.

However, Ann and Jonas, being able to compare a longer period, have noticed the effects these days of environmental impact from climate change and pollution.

“The water has turned murkier, and there is more plastic. We notice effects on the coral system as well. And I went fishing and did not catch anything this time. But back in 1997 I got a lot of fish,” recalls Jonas, who adds that an unsuccessful fishing can of course also be due to bad luck.

It was in that year, over 20 years ago, that they first set foot on the islands. They had been on an adventurous trip to Malaysian Borneo, where they had climbed Mount Kinabalu, among other things. Ann and Jonas have some warm memories from that trip, which included being informed about the rainforest destruction by rainforest people and seeing proboscis monkeys in Bako national park in Sarawak.

“We saw females and a male with their red noses in the sun,” smiles Jonas.

And to wind down at the end of a three-week journey they had chosen to explore Perhentian, then a backpackers’ haven.

Back then one could really find one’s paradise dream beach there, the Swedes think.

“It was amazing; I had not seen anything like it!” says Ann. 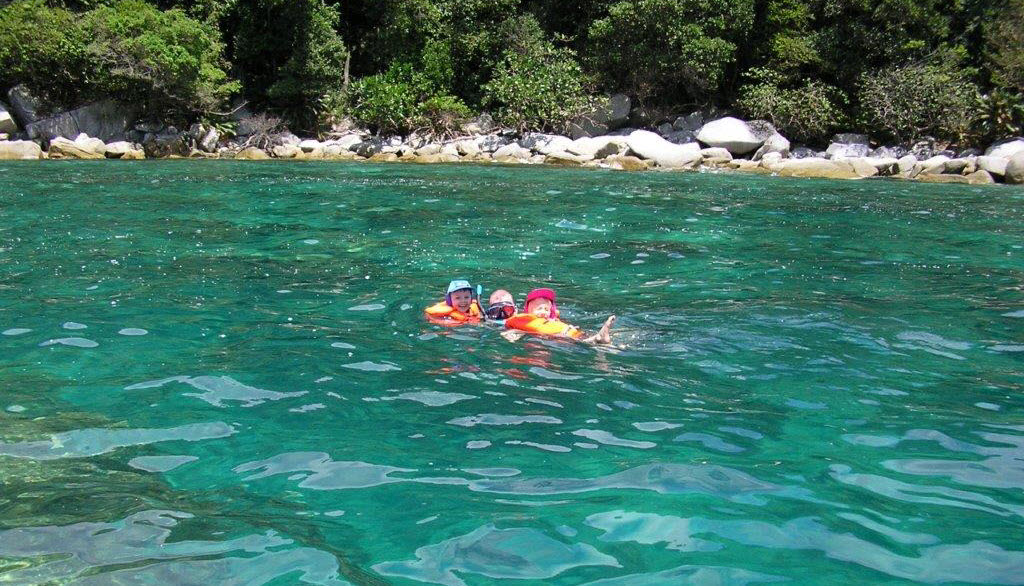 Back then it was much smaller scale, with only fishing boats available to get out to the two islands from the mainland (which could take up to three hours), of which they chose the smaller one.

They stayed at D’ Lagoon, which still exists today. The first night Ann and Jonas had to sleep in a very basic dormitory room without mosquito net and even a fan, until they could be upgraded to a “bungalow”, which came with a fan but still with the toilet and shower separately outside.

One of the adventures there for Jonas was to hike across the whole island in hunt for beer – it could only be bought in one place on the whole island – to then carry a fridge-load back over the island mountain in darkness. 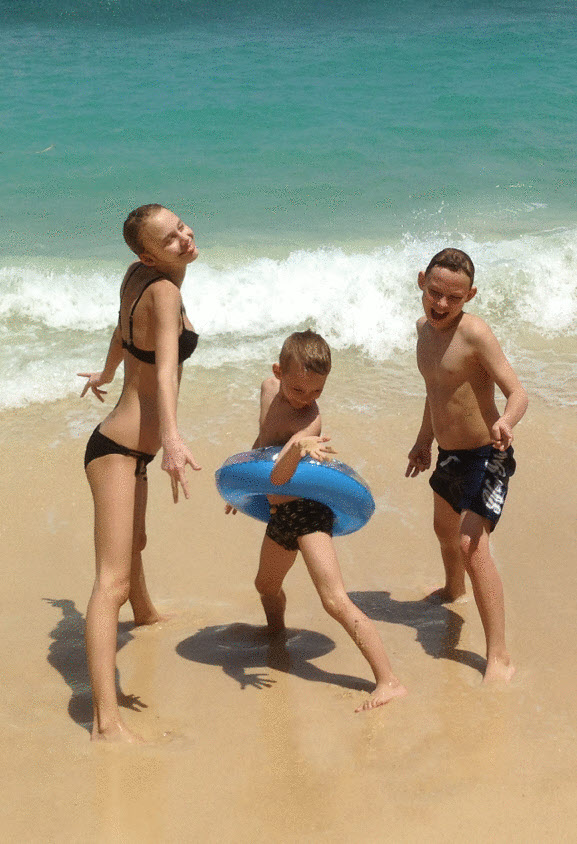 “When we had discovered that trail we went over the mountain and had remote beaches entirely for ourselves,” adds Ann.

And this is where they also became hooked on the life under water – going out snorkelling for the first time. At first, they both became terribly afraid. There were loud, mysterious sounds. Then they discovered that it was the parrot fish eating on the corals that made the spooky sound. Then there was the first encounter with sharks…

“I had never seen a shark live before and back then there were plenty of sharks there. I was snorkelling 300 metres out when suddenly a big reef shark came straight towards and circulated around me And under water everything looks bigger so I was frightened to death!” laughs Jonas.

Since then they have learned not to be afraid of sharks.

“We have actually returned to that beach once when the children were small. And were so lucky; when we walked there in the shallow beach water with our children Axel and Johanna, who were then three and five, small baby sharks came up; reef sharks that they got to see for the first time,” recalls Ann.

After the first trip to Malaysia Ann and Jonas dedicated to get their diving license, which they took in Malta in 1998. And since then they have returned to Perhentian Islands another five times! And during this latest trip in June 2018 also their third child Gustav has learned how to snorkel (he also learned to swim there).

And now Ann, who makes all the holiday planning, feel that they are ready to explore some new islands; on this trip they visited nearby Kapas, which is located a bit further south and closer to the mainland.

At Perhentian Islands they are by now known to the islanders: “They recognise when we return to the same place,” says Ann. “I would love to go to Sipadan Island in Borneo, a diving Paradise.”

“But we want the children to take diving license before that and I hope they will ask for that as Christmas gift so that it can be completed back home in Sweden before going on the next vacation trip,” says Jonas.

But what do friends back home say when they travel to this unknown destination in Malaysia time after time? The answer is that both Ann and Jonas have enticed friends to also travel there, who all have returned happy. To reach the destination one ideally takes a domestic flight from Kuala Lumpur to Kota Bharu and from there via land transport to Kuala Besut, which is the entrance to islands. The last part of the journey out is by speedboat.

And for this family the Malaysia trips have also evolved to include city tourism, by spending some days in Kuala Lumpur.

“We really like being in Kuala Lumpur,” says Jonas, where shopping and Malaysian food are among the draws. “There are many fun things to do here and it’s family-friendly and not too hectic.”

A three-week long trip like this one also gives them the rare opportunity to enjoy lots of quality time together.

“There can be small disturbances, but after three weeks it functions well, even if one gets a bit annoyed sometimes. That is part of living close together, to get upset and then move on. And that is also a good test for the continuing family life when back home again,” says the father.

And for certain, the Larsson family will return to their favourite Malaysia once again.