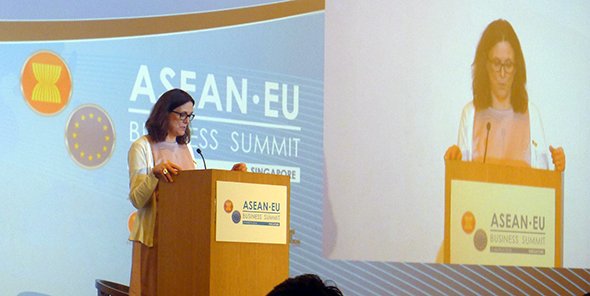 The annual consultations were expected to further deliberate on the next steps towards the possible resumption of the Asean-EU Free Trade Agreement. The consultation would also note the implementation of this agreement negotiations’ work programme 2017-2018, stock-take Asean-EU relations as well as update and exchange views on the recent global and regional economic developments.

The Ministers and Cecilia Malmström also met with the representatives of Asean-EU Business Council who updated on activities and initiatives undertaken by the Business Council in enhancing the economic cooperation in the two regions.

As part of her visit, the Commissioner also delivered a keynote speech at the EU-Asean Business Summit, involving representatives of European business in the region.

The EU and Singapore completed the negotiations for a comprehensive free trade agreement on 17 October 2014. The initialled agreement needs now to be formally approved by the European Commission and then agreed upon by the Council of Ministers and ratified by the European Parliament.

In 2015, the EU sought an opinion of the European Court of Justice to clarify the EU competence to sign and ratify the free trade agreement with Singapore. The Court delivered its opinion on the division of competences in May 2017. Following the opinion, a debate with the Council and the European Parliament on the best architecture for EU trade agreements and investment protection agreements is ongoing. 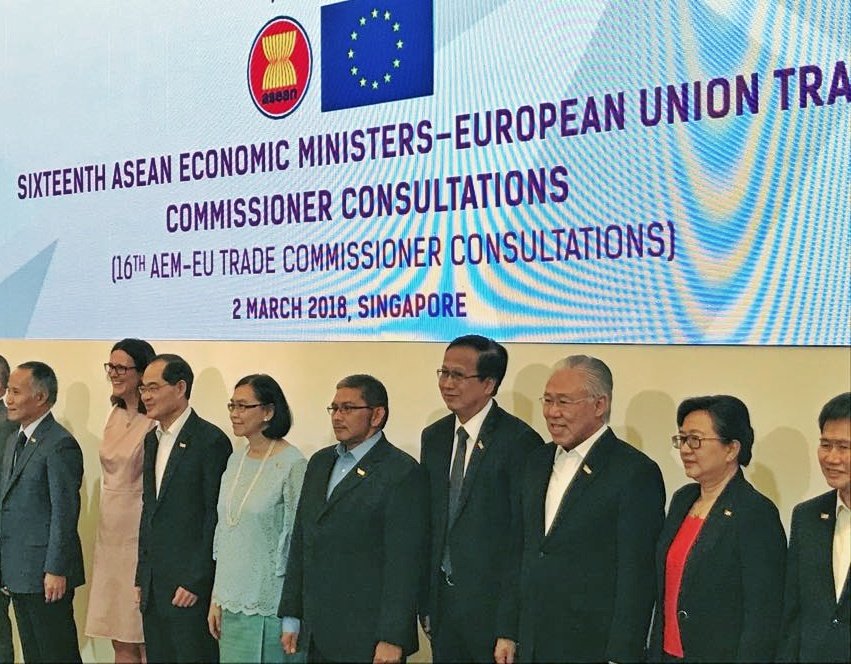 Singapore is by far the EU’s largest commercial partner in Asean, accounting for slightly under one-third of EU-Asean trade in goods and services, and roughly two-thirds of investments between the two regions. Over 10,000 EU companies are established in Singapore and use it as a hub to serve the whole Pacific Rim.

The EU is actively engaged with the South East Asian region. Negotiations for a region-to-region FTA with ASEAN were launched in 2007 and paused in 2009 to give way to bilateral FTAs negotiations, conceived as building blocks towards a future region-to-region agreement.

At the regional level the parties are undertaking a stocktaking exercise to explore the prospects towards the resumption of region-to-region negotiations.

Besides the trade negotiation the EU cooperates closely with the whole Asean region. Cooperation between the two regions is framed by a biannual Asean-EU Trade and Investment Work Programme, which is articulated along the following activities: an EU-Asean dialogue, which includes discussions on trade and investment issues at ministerial and senior economic officials levels; bi-regional expert dialogue groups; cooperation activities; and regular organisation by business of ASEAN-EU Business Summits (an established meeting point since 2011 designed to be a platform for business leaders, thought-leaders and policy makers to interact and debate the key business and trade issues of the day). During the visit to Singapore by EU Trade Commissioner Ms Cecilia Malmström the Embassy of Sweden in Singapore together with the Swedish Chamber of Commerce, Singapore held a reception on 1 March with the Ambassador of Sweden, HE Håkan Jevrell in attendance.