Danish Thai Chamber of Commerce held its most exciting Annual General Meeting ever on Wednesday night, 22 April 2015, as usual at the Royal Danish Embassy in Bangkok. The excitement culminated when the election of seven board members for seven vacant position on the board suddenly became a contested election. It was Simon Scheibel, Finance Manager at Novo Nordisk Pharma, who raised his hand when the chairman of the meeting, Tom Sorensen asked if there were any members in the audience who would like to candidate – warning in jest that if there was, the dinner which was ready now, would then be cold as there would have to be a formal election. Simon Scheibel said that he had thought about running for the board, but did not make up his mind until he heard how much efforts the board was putting into attracting new and younger members, which was fitting his profile.

The first count of votes showed that two candidates had the same number of votes. The second showed a different number. Then the election committee went into the dining room of the ambassador to concentrate on counting the votes without sweat running down their backs – the heat on the terrace was a torment – and after two more counts, it turned out that the members had to vote once again – this time only between the two candidates with equal number of votes, Jimmy Jensen and Torben Nybo Jensen. In the second round of election, Jimmy Jensen won the seat while Torben Nybo Jensen, who had not been able to join the AGM, became the reserved board member who would be activated in case one of the regular board members resigned during the term. Prior to the voting, the meeting had in many other ways already been exciting. The Chairman of the meeting was for the first time in the history of Dancham not Poul Weber (except during his years as President of the Chamber), but Tom Sorensen, whose skills as a meeting leader was put to the test by the unusual twist of the election. Tom Sorensen put effort into explaining the proceedings – especially prior to the report from the past year by the outgoing board which was not for the members to approve or vote for – it was purely for their “consideration” only.

Dancham President Thomas Nyborg explained how the board had done a deep analysis of the function of the chamber in order to re-direct the chamber more focused on the needs of its members. Among others, there would be more focus on getting members to meet each other. Especially new members, who joined the Chamber, should not meet a closed old-boys-network, but should be actively presented to other members whom they may share business interests with.

Thomas Nyborg was followed by Commercial Counselor Asbjørn Overgaard Christiansen who showed the trend in member participation in chamber events over the past couple of years. The trend was leaning towards social events with fewer joining the more informative meetings. It was followed up by Vice President Supareak Charlie Chomchan who had done an impressive analysis of the composition of the corporate members, showing that the problem was that there were not the number of members who resigned during a year, which had been rather stable for several years, but the drop in new members joining the Chamber.

After an undramatic presentation of the financial result and the balance sheet, this analysis was continued by a presentation of a dramatically different membership fee structure, which would make it considerably cheaper for new Danish upstarts to become a member and somewhat more expensive for more established members with higher annual turnover and hopefully also higher profits.

The members approved this with a majority of 23 members voting yes for the change. 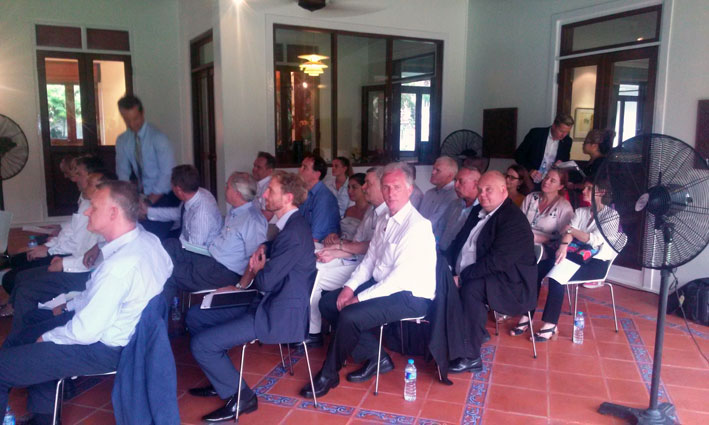 Prior to the AGM, the members listened to a presentation by Ambassador Mikael H. Winther of the special Visa Red Carpet Process, which was established to benefit members of the Chamber. Persons who qualify for the red carpet privileges would get their visa after only three working days and would have to submit less documentation and their visa would if needed be given for multiple entries valid for several years.