JOHOR BARU: IMMIGRATION officers are dusting off a provision in the law books to deny unsavoury characters from setting foot in the country.

They have alerted all personnel at air, land and sea entry points and put at the top of the Immigration watch list, those they deem as being “on passport runs”, with officers ready to give them the marching orders. 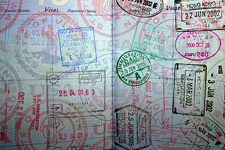 These are mostly foreigners who come to Malaysia for reasons other than leisure and found to have been abusing the non-visa entry.

Under Immigration regulations, most foreigners do not need visas when the duration of their visits — for business or leisure — is less than a month.

This proactive enforcement was triggered by a spike in speedy re-entries by foreigners who exit the country just before their 30-day stay is up.

The country’s first line in security screening had noticed that these suspect foreigners would leave the country, some for no more than an hour, just to get their passports stamped for a renewed 30-day stay.

The department revealed that the surge in this trend was particularly noticeable at the Customs, Immigration and Quarantine checkpoint at the Causeway here and the Bukit Kayu Hitam checkpoint in Kedah.

Immigration officers have strong reason to believe that these foreigners are involved in vice, including prostitution and drugs.

Immigration director-general Datuk Alias Ahmad told the New Straits Times that while many citizens of Asean countries were guilty of this, a significant number of “tourists” from non-Asean countries were habitually making their passport runs at the country’s checkpoints.

“Effective immediately, those who make three consecutive U-turns into the country will be held for questioning.

“Those who fail to furnish the department with convincing evidence of their intended stay in the country will be denied entry,” he said, adding that bona-fide frequent visitors, had nothing to worry as their credentials would support their travel into the country.

Those turned away at one entry point will find that all other entry points into the country would also be closed to them.

Immigration records showed that most of those who abused their stay were young women from China, believed to be working in the flesh trade. Those from Uzbekistan are a close second.

Thais, Vietnamese, Indonesians and Filipinas are also among those going in and out of the country regularly. There is a sizeable number of male foreigners doing this as they are employed illegally.

The Immigration’s concerns are not without basis. Records from the federal police headquarters’ vice division show that they had been picking up nationals from these countries at red-light areas, with many of them openly offering sex.

Alias said the department was determined to stop foreigners from circumventing the system, to carry out illicit activities in the country.

“It is brazenly done. Groups of foreigners re-enter the country as soon as they leave.

“As there is no cooling-off period for them, they return almost immediately.

“If they could, they would not leave at all… but to avoid problems with their travel documents, they will go to the nearest border checkpoint to get their passports stamped before reentering as a tourist.”

Alias said this new measure should not be misconstrued as not welcoming tourists into the country but part of the department’s efforts to keep out those abusing their tourist visas.

“Normally, an average tourist will stay in the country for about a week. These foreigners who make regular U-turns are not genuine tourists.

“Granted, there is no law to limit the number of U-turns, but I am exercising the department’s right to step up checks on those who come into the country this way.

“If they can explain to us the reason for their multiple entries and furnish us with more details of their stay, including their accommodation and spending money, we will certainly welcome them. Otherwise, we have to deport them.”

Alias said aside from international airports, checks against these foreigners had been stepped up at all land and sea entry points, as these were the preferred routes as they were less costly and time-consuming.

Alias said the crackdown on abuse of stay as well as permits, was critical in ensuring the country’s security and social stability.

He added that foreigners coming into Malaysia for economic reasons, including vice, had adopted various methods, including getting student passes without even attending classes they had signed up for.

The NST last year also exposed how syndicates dealing in the flesh trade were abusing foreign spousal visas to secure their working girls’ lengthy stays in the country.

5 Comments on “Malaysia to clamp down on ‘visa runs’”