After 20 years in business The Cabinet (equally representing a Hua Hin-based furniture store, a kitchen and interior designer etc.) have achieved more than even those who think they know this firm well could imagine!

Quite many years ago when Janeric Hogane introduced The Cabinet he talked of: ‘From bare shell to beer in the fridge’, referring to bare shell condos and houses.

The business have evolved with the times and today the are for instance doing good business by assisting residential Bangkok investors in their process of completely removing the interiors of older condominiums and refurbishing them – something that well represents Janeric’s first tagline.

And today their one-stop service has gone one step further: if a customer comes looking at kitchen designs but do not yet have the house, well then The Cabinet can build that house too! And at the same high quality that permeates this business.

“We must help the customer out,” is Janeric’s natural response to such a situation, as he and Mrs Apinya Hogane reflects on the 20 years gone by. And now they have recruited the budding talent Mr David Nilsson to help steer the business into the future.

With Janeric being Swedish The Cabinet naturally stands for Trust, Quality and Service – and, needless to say, here this refers to genuine high quality and service, something they are very proud of being able to offer in a Thai setting. He highlighted their unique selling proposition, which is really core to their business success, when they held their 20 years anniversary presentation at a Thai-Swedish Chamber of Commerce networking in 2016. “With our focus on trust, quality and service it is very difficult to be the cheapest but our aim is to be the best,” Janeric said.

“We also service each other within the team, so that everyone have access to and get good and correct information.”

It is also a matter of having good products and following up well, he highlighted.

This approach have led to that they have built a very strong and positive reputation. Customers usually declined service agreements and trusted their good reputation.

A positive effect of this is also that they through word-of-mouth have continuously earned more business.

“Marketing is not something we are doing very much! Unfortunately,” adds Janeric.

Typically they are constantly too busy with sales, delivery and customer care to find the time needed for any focusing on marketing. 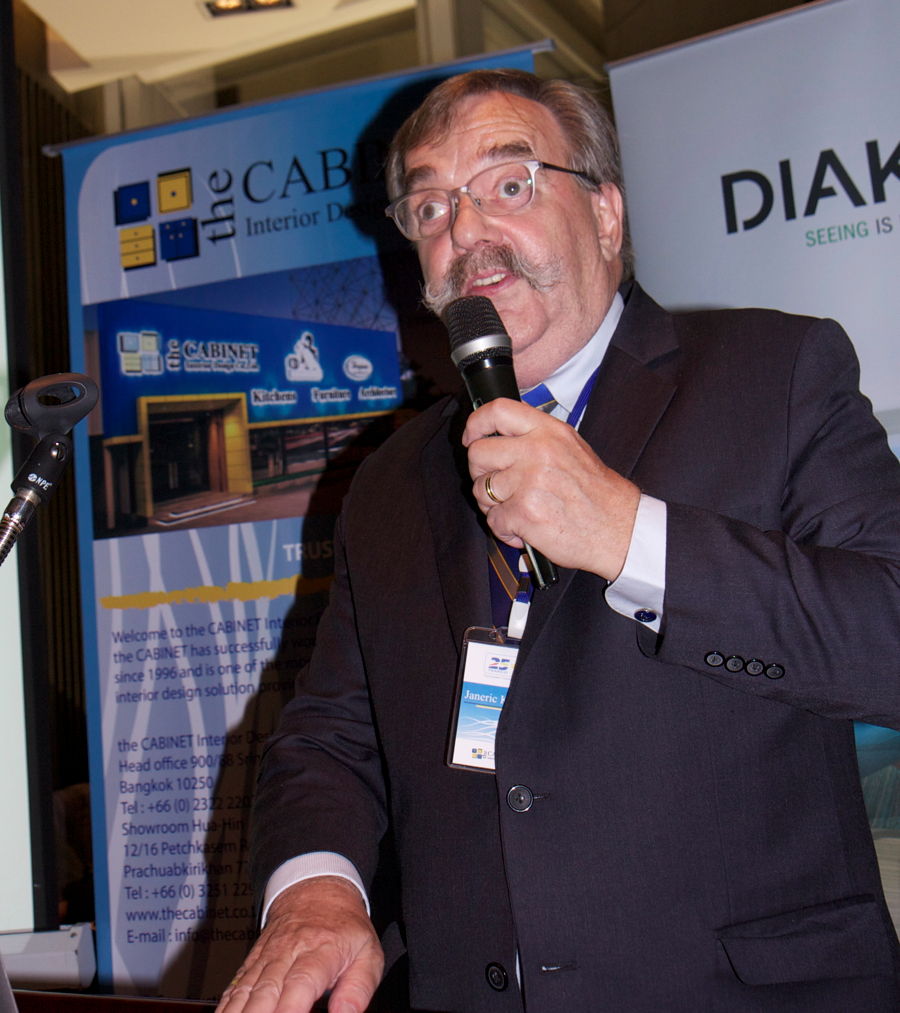 Up until 2008 they in fact grew the turnover by fifteen per cent yearly.

“We didn’t have a dip during the crisis in 2008, but the dip came in 2010. We delivered previous orders in 2009, which was a fantastic year for us. In 2010 everything decreased but has thereafter steadily climbed up again.”

There are some other connections to Sweden and the Nordics too that have contributed strongly to their sales. The most obvious one is the large population of people from the Nordic countries that keep on investing into residential homes in Prachuap Kirikhan province as well as Rayong.

The other ones go under the names of Black Mountain golf course and Logans Thailand. These two Swedish-owned and managed long-lasting developers in Thailand are big clients of The Cabinet. The most recent project for Logans is the delivery of the entire interiors for their brand new hotel in Mae Phim.

Black Mountain also keeps on growing its residential part and The Cabinet has been a provider from day one.

90 per cent of The Cabinet’s customers are foreigners, with the remaining coming from Bangkok.

“We mostly work with international projects; having difficulty in getting through the door with Thai projects, which would be fun to do more. We have a few such projects and those works well. But then you often have an owner with a European mind-set,” explains Janeric.

As for the Hua Hin scene he says that foreigners are absolutely still investing in real estate there, but mostly in new-build projects.

One milestone is when Apinya and Janeric set up their own factory production for built-in furniture.

“We used a subcontractor to produce the furniture for us during the first 3 years. And then we started our own factory,” says Apinya.

“Everything tailor-made we produce there, completely ready to install or to assemble on site. This should be compared to many build-in companies who move the whole factory to the customers’ premises.”

“We do about 800 kitchens per year,” says Janeric. “And also own design and lots of wardrobes and cabinets custom-made to the customer’s wishes.”

Their other big milestone, which was becoming a developer, also leads us back to an approach dear to them: quality.

“I wanted to make the perfect house for the customer. When we did the interior for customers and came into their houses we found so many problems! Then we had to fix this and that. And when we get the work to build a house I said to my people: ‘This is the dream come true to build a house and we will not build in the same way as others!’ And then everyone in the team was very concentrated, as everything had to be clear and the end result 100 per cent perfect. And we achieved it and the owner of the project was very happy!” says Apinya.

And taking the step from interior designer to house construction and design was not big for The Cabinet.

“We already had the people with all the skills in-house.”

“We built houses with confidence, we had seen so many mistakes done by others and we did not need to repeat those. I think that if you have the right people around you this is achievable, and it’s fun to do it,” Janeric fills in. In the first project they managed to build four houses in equally many months, and many readers will know that a house of lower standard can take a long time to build here and thus costs, in comparison, a lot of money.

Reflecting on their achievements Apinya says that she is done and thinks their baby has grown up as a business and reached well passed what she could have imagined.

“It’s already too big for me! I want to retire too. I did not think about that until this year. I want to continue two more years, to spend the time with our staff and let them grow in their roles of running the company by themselves in the future. Then we’ll try to work a little bit less. I think it’s too much for Janeric also to continue like this.”

Janeric, on the other hand had had larger ambitions: “I thought we could grow much bigger – with a concept that is quite difficult though,” he admits. “You must find the right people to handle things; otherwise it would not have been a success.”

They travelled to Bangkok to meet a customer and sign the contract and collect the deposit. Janeric usually drives without his shoes and he had brought a pair with him into the car to change upon arrival. And when he so did something in the shoe bit him.

That something was a scorpion! Apinya said to Janeric they ought to go to the hospital right away. But, he insisted they go and sign the contract and collect the money first.

“I’m a Viking but that really hurt!” recalls Janeric.

The customer noticed that something was wrong: ‘Are you not O.K today?’ ‘Well, a scorpion bit med in the car!’ ‘Oh!! You must go to the hospital at once!!’ The customer signed the contract and gave them the cheque immediately and off they went for Janeric to get injections. Today David Nilsson is the latest injection into the company.

“We believe in him a lot for the future. So we will see if we can retire soon!” smiles Janeric, “But, really, it’s important, because it’s not easy to find foreigners, and we would like to have a few Swedes who understand what we are doing.”

And David seems to be the man to take The Cabinet journey further: “Why stop with building some houses! Why not building a whole condominium project or hotel!” he exclaims as he has a potential such project in mind.