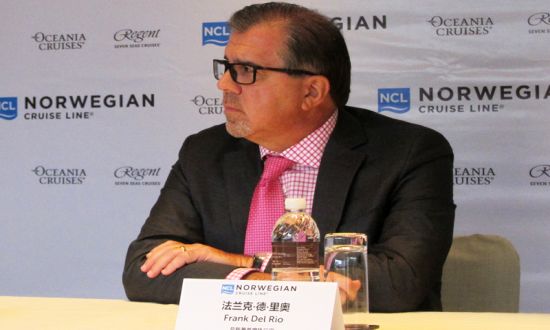 He also said he expects the new ship to perform better financially than it would in Europe or the Caribbean.

Details on the ship’s name, itineraries and features are set to follow before the vessel debuts in China in summer 2017.

“It will be a high-quality, high-end product, authentically Chinese,” he adds. Although, he will not give it a four- or five-star rating.

Norwegian will help define itself in China via cuisine and entertainment. Therefore there will be served Norwegian food onboard the new cruise. According to Frank Del Rio, “pinnekjøtt” and smoked salmon are the perfect dishes to be served to the future Chinese passengers. “There will be no question of who will have the best cuisine and it will be Norwegian,” Frank Del Rio says. “I think you will see a comprehensive entertainment program that captures the essence of Chinese culture.”

The company is holding its cards close, not announcing much in the way of features, but promising to appeal to a very well informed, sophisticated Chinese consumer.

Trying to make their brand visible in China, the Norwegian company will spend on advertising including TV, billboards and print.

“We have to help our travel agent partners sell the product,” Frank Del Rio says,

William Harber, senior vice president and managing director Asia, is on the ground for the company leading the charge in the east and said the demographic in China of emerging wealth is trending slightly younger, making it a good fit to Norwegian’s Freestyle cruising concept.