The Danes in Pattaya met the Ambassador Mikael Hemniti Winther with lots of questions, when he visited Café Kronborg yesterday. The meeting comes after the decision to close the Danish Consulate earlier this year.

“We wish to compensate for the closure of the Danish Consulate in Pattaya. And it was my idea to come here today to meet you and talk with you,” the Danish Ambassador said in his opening speech yesterday at Café Kronborg.

23 Danes had come to meet the Ambassador and to say goodbye to their Consul Stig Vagt-Andersen, who has been highly appreciated by the Danes living here.

“I want to say that it has been very helpful to have Stig and the Consulate here in Pattaya. We will all miss him very much,” said Bjarne Nielsen, owner of Café Kronborg.

Bjarne’s statement was followed with applause from the Danish crowd in the café. The Consul himself was quiet during the meeting.

A decision taken from above
Soon after the Ambassador’s opening speech questions rolled over the white and red tables. The very first referred to the decision of closing the Consulate.

“I have read that Stig was not consulted before the decision was taken. It feels like the decision has been taken from above, is that true?”

“Yes, that is true. It is a decision taken in the Foreign Ministry. It has not been a democratic decision. The closure is part of a larger centralization,” Mikael Hemniti Winther explained.

Other questions referred to the future quality of citizens services in Pattaya.

The closure of the Consulate means that Danes living in Pattaya can no longer get passports issued by sending documents with post to the Danish Embassy in Bangkok. Previously the Danish Consulate in Pattaya issued emergency passports, but it is now necessary to travel to Bangkok to receive this service. Driving license and extension of driving license can also no longer be provided in Pattaya.

It is, however, the Embassy’s intension to bring a geometry suitcase to Pattaya, so that citizens can get passports issued locally.

“It is very important for us to provide a good service. If you receive a poor service, let us know. It is our intension to come to Pattaya once a year, depending on the need,” Mikael Hemniti Winter said. 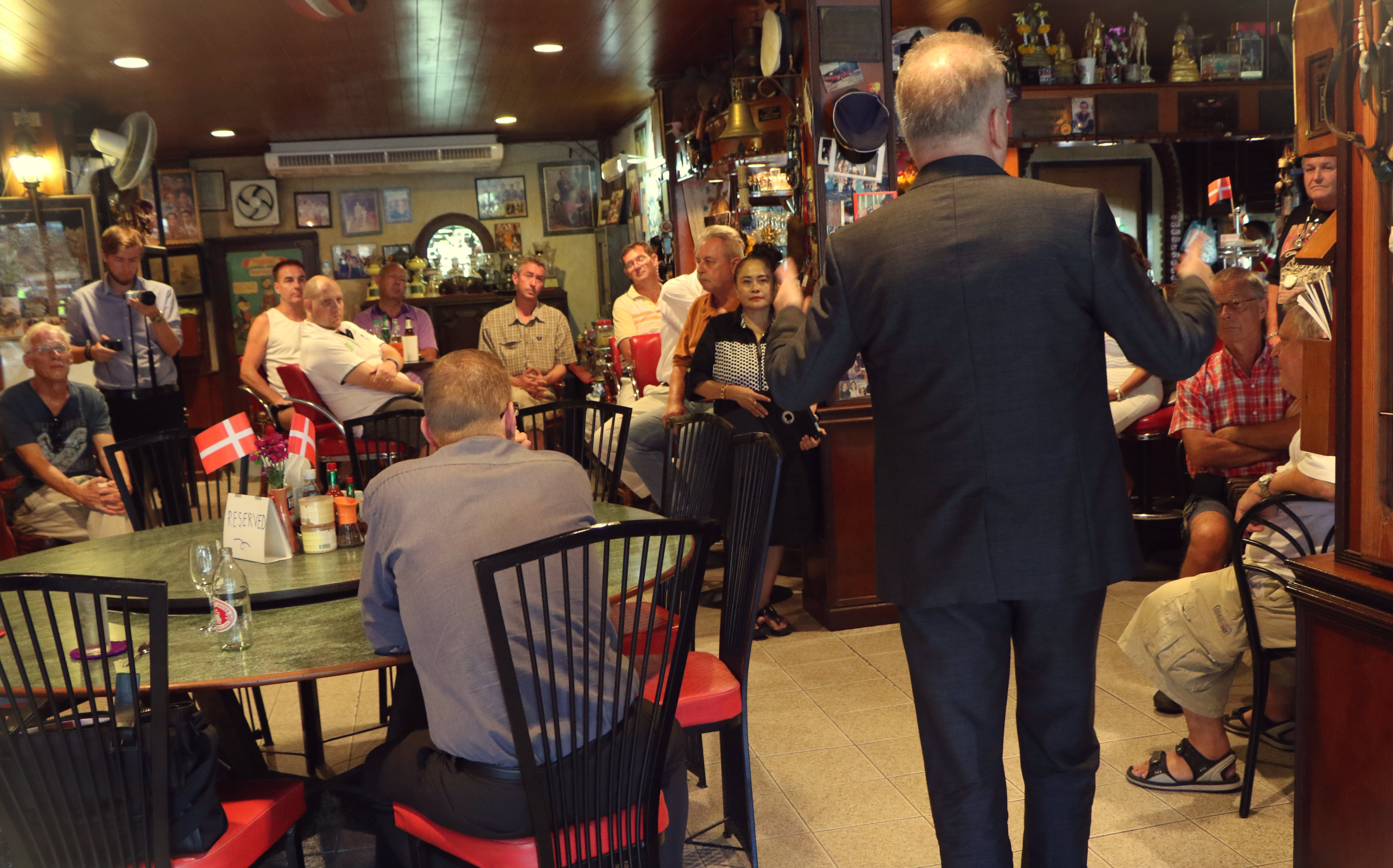 There were also questions about the processing time for issue of visas at the Danish Embassy in Bangkok, because some had experienced a longer waiting time than usual when applying.

To this the Ambassador explained that there are periods with extra pressure in the visa department, but that the Embassy is extra aware of this, now that the Consulate has been closed.

A local loss
Many of the Danes living in Pattaya have known Stig Vagt-Andersen for more than 20 years and during these years he has build up a strong and local network.

“Poor Stig, Poor us. I just want to say thank you for the service that Stig has given us. He always gave the best service,” one of the Danes said and started another applause for the Consul.

According to Stig Vagt-Andersen 25 percent of the Danes living in Pattaya are 75 years or older. Many of them will find it difficult to renew their one-year retirement visas, when they do not have the Consulate in Pattaya to assist them.

“It is obvious that there will be some challenges in the future. Furthermore, the closure is a loss for the local relation. It is not possible for the Embassy to remain the same relation to the Danes living in Pattaya in the future,” Stig said.