In early December 2013, Minister for Trade and Nordic Cooperation Dr. Ewa Björling visited Indonesia – for the third time in three years! We spoke to her to find out why Indonesia it is so important for her to visit Indonesia. 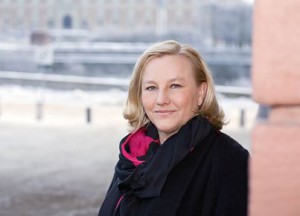 Dr. Björling, why have you visited Indonesia three times in less than three years?

Ewa Björling: Well, this time I’m not here for a bilateral visit, but rather for the ninth WTO ministerial conference, which is currently being held here in beautiful Bali. I’m very impressed by the Indonesian hosts, and look forward to a positive outcome of the meeting. But generally Indonesia being an important player on the global political and economic scene is a very important partner for Sweden – in a number of areas. This is why I have as trade minister led two business delegations to Indonesia to Jakarta in 2012 and 2013.

How do you see the Indonesian-Swedish relationship evolving?

Ewa Björling: It’s excellent! We have a wide and active collaboration on a number of topics of mutual interest ranging from human rights to innovation. The visits to Jakarta last year by the King of Sweden HE Carl XVI Gustaf and Prime Minister Fredrik Reinfeldt really contributed to this. During president Yudhoyono’s visit to Stockholm in May this year, one agreement and three letters of intent were signed between our countries – which all provide important support to our efforts.

Where do you see unused potential in our relationship?

Ewa Björling: I think we can do a lot more. This is why I have as Trade Minister devoted special funds for promotion efforts geared towards the partners where we see the greatest potential, and Indonesia is one of these countries. We are especially excited over the good collaboration on sustainable urban development and the SymbioCity concept, where we are now working together with a number of Indonesian cities in line with the Indonesian Green Cities programme.

Now you are soon going back to Sweden. When will we see you back in Indonesia?

Ewa Björling: Well, next year is an election year in Sweden, just like in Indonesia, so I will travel less then I have this year. But if I get the chance I’ll definitely come back!

Source: Embassy of Sweden in Indonesia