It was not only the Swedish flag that caught our attention, but also the boat it was attached to, a craft of the kind that certainly turn heads from most passers by, here the visitors to the Singapore Yacht Show (held in April.)

Berthed adjacent to modern and, nearly without exception, all of them shiny white boats and yachts, was this striking 1950’s – 1960’s retro vintage style boat named La Bambola. With its lacquered and varnished mahogany veneer and slick design features this boat from J-Craft of Sweden would fit perfectly in any of those very early James Bond movies – or in the Mediterranean, and in particular in the Scandinavian archipelago of yesteryear. So surprising to find in 2013, and not least in Singapore!

Speaking to the discerning palette of connoisseurs

But this combination of a vintage look and modern discreetly built-in technology while marrying beautiful materials, exquisitely engineering details and distinctive design is also, as it turned out, attractive in the new century. Today, this rare craft speaks to certain types of customers: connoisseurs and a discerning palette of luxury lifestyle customers. Such clients who have eventually given J Craft their stamp of approval, as some 20 boats have eventually been sold in the Mediterranean area after a few really tough first years when the new model was brought to the market. These want something unique designed for them, with a desire to stand out, and the ‘Torpedo’ really caters to that, every single boat to a large extent custom-built to each buyer’s desires.

And how fittingly is it not to have the model baptized by no other than James Bond 007 himself, Sir Roger Moore, which took place coinciding with the boat show in Monte Carlo in 2009!

Also, the fact that His Majesty Carl Gustav XVl, King of Sweden, owns the very first boat developed back in 1999 has brought a lot of attention in the right circles to J Craft as a brand.

Back to Brigitte Bardot

It was co-owner Johan Attvik who believed there was a market abroad for this kind of perfect luxury all-rounder.

He had bought a J-Craft boat himself back in 2004 and it had been love at first sight. Later he decided to buy into the company, and that was the start of a revival of the boat brand, which had been dormant for some years as a result of the early 2000s recession.

“I thought this would be a great concept to bring down to the Mediterranean at that time – which we also did a few years later. We bought every J Craft that was on the used-boats market and redid them so they were as new and started a marketing project taking us all around Europe to showcase this boat, ” explained Johan as he and the co-CEO Aleksandar Milakovic were attending the boat show to promote the Torpedo.

Eventually, with no more boats left J Craft conjured up this new model based on all the knowledge and experiences they had accumulated, combined with modern boat technology.

“I would say: technically advanced and a much more contemporary boat in that sense – it has the looks of a 60’s – 70’s boat but you can really use it as a very modern boat, as any of these white beauties around here. But we try and bring back what we think has gotten lost in the industry. People smile when they see us, cherish us as a vintage car and so on.”

As Johan compared the Torpedo with all the surrounding “white blobs” at the Singapore Yacht Show he described it as the boat that somehow you want to be on, that people look at with desire.

“In the last two years one could notice people going more and more modern with their boats and we wanted to do the complete opposite; going back to the 60’s, 70’s and the Brigitte Bardot kind of feel. Obviously the boat has brand new technology in it, but we are hiding it; we don’t want people to see it. That’s our aim,” Aleksandar filled in. 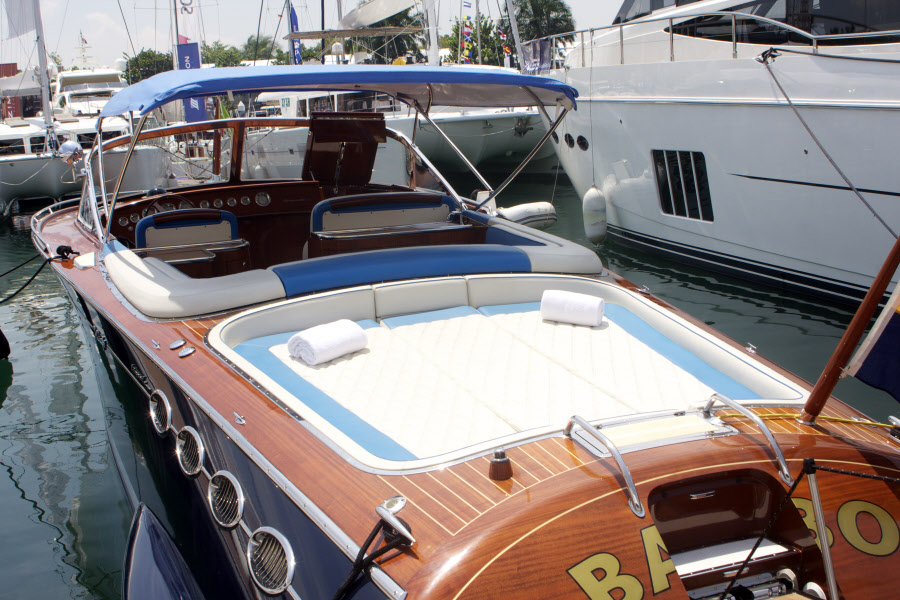 This J Craft boat is described in the marketing material as ’a boat like no other’; a combination of classic style and glamour (reflecting a little of la dolce vita) with cutting edge technology, power and contemporary convenience. Form and function are of equal importance for the 42 Ft Torpedo, coming with exhilarating performance.

“We developed the hull together with Volvo Penta and installed their IPS propulsion system with a joystick, so you can manoeuvre the boat in a very delicate way. She manoeuvres like a dream really.”

Engines come in three different sizes, the 400s, 500s and 600s. With the biggest engines they have achieved speeds with the Torpedo of between 46 to 48 knots.

The 350 nautical mile range is also of essential importance to her differentiation. Similar boats can still be found on the market but much smaller.

“The Torpedo is much more of a seaworthy vessel. And no problem to go long distance,” Aleksandar explained.

“It has the look of an old lake boat, absolutely, but she’s well suited to go from Monaco to Sardinia.”

In these waters it could be from Langkawi to Phuket for instance. It is a powerful boat that can master high seas and rough conditions that other luxury tenders or day boats could not contemplate. 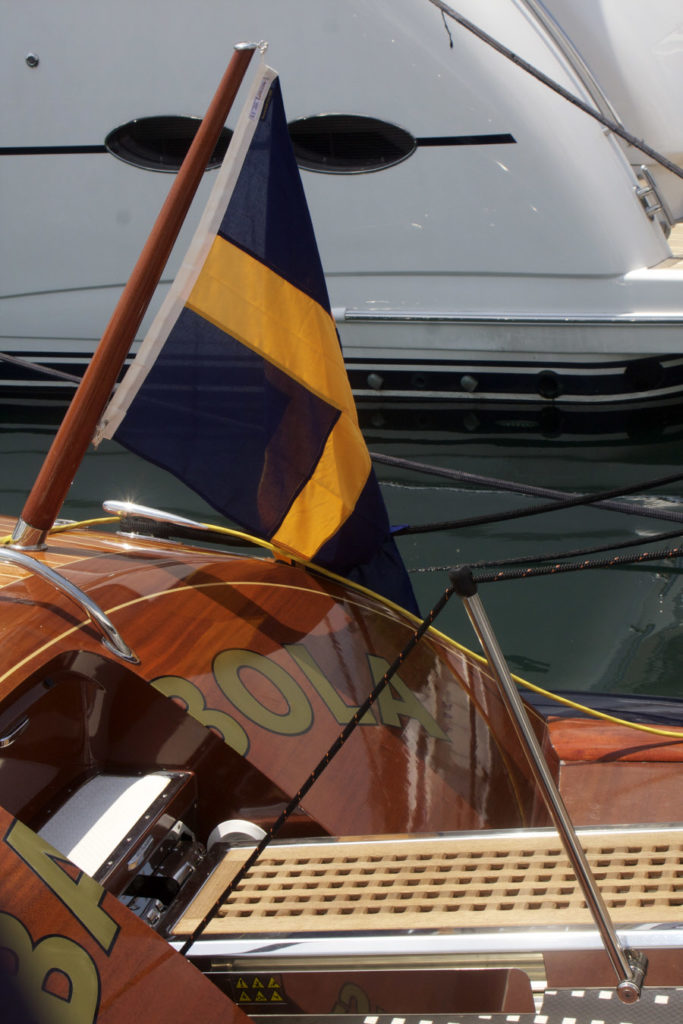 J Craft continues to build on the island of Gotland where there is a very strong tradition in building quality boats, with know how and where skilled craftsmen can be sourced to do all the elements perfectly.

“You don’t find them everywhere – that I can tell you,” said Johan, “and for a brand of this kind building luxury boats quality is of utmost importance in order to surpass buyers’ expectations.”

4000 man-hours are put into each hand-built boat and consequently it comes at a hefty price tag: 850 000 Euro plus VAT as starting price.

“Looking at price per foot we’re the second most expensive boat in the world,” concluded Aleksandar matter-of-factly. “But we do produce in Sweden, where the labour is not cheap and we’re fond of the quality and that’s very important to us.”

“Being handmade and if you look into the details, it’s not an expensive boat,” thinks Johan.

There are certainly very few products of this kind originating from Sweden and they compare themselves with Koenigsegg (hand-crafted high performance sports cars). As it happens, very recently the fastest and most expensive care ever sold in Singapore is a model from that Swedish brand.

Talking of cars, J Craft like to see their boat as a Rolls-Royce on the water – and that happens to be their car partner with which they do many events and joint marketing.
“That’s also an achievement for a little Swedish company like ours, that such a strong brand globally has chosen us as partner.” By showcasing the Torpedo in Singapore for the second time J Craft are hoping to penetrate also the Asian market with its dramatically increasing market, and seemingly insatiable yearning for luxury.

However, Johan was aware of an uphill challenge in that you don’t have the heritage here.

“If I compare with the U.S we very much represent the heritage of old wooden boats etc. that have been around for generations and they see this as a very exclusive boat I would say, comparing it with a Bentley or something. Here they have a very different view on it than maybe where our hearts really are.”

More than bringing back the happy 1960’s Asia is about expensive beautiful things, limited editions and collector’s items.