Developing. That would be the best word to describe the largest city and former capital of Myanmar, Yangon, previously known as Rangoon.

Before arriving in Yangon, I didn’t have many expectations as Myanmar isn’t the top picked tourist destination in travel catalogues. With images of the city being slim to non-existent in my head, I felt like I was about to watch a movie without having seen the trailer.

Exited and unknowing about what I had signed up for, I boarded the plane in Bangkok and set off for Yangon.

From the few things I had heard about Myanmar, I mostly expected Yangon to be an underdeveloped place with dirty streets and a lot of noise.

To be honest, that image isn’t far from reality. But the city is also captivating and charming in a way, you won’t grasp from photos. 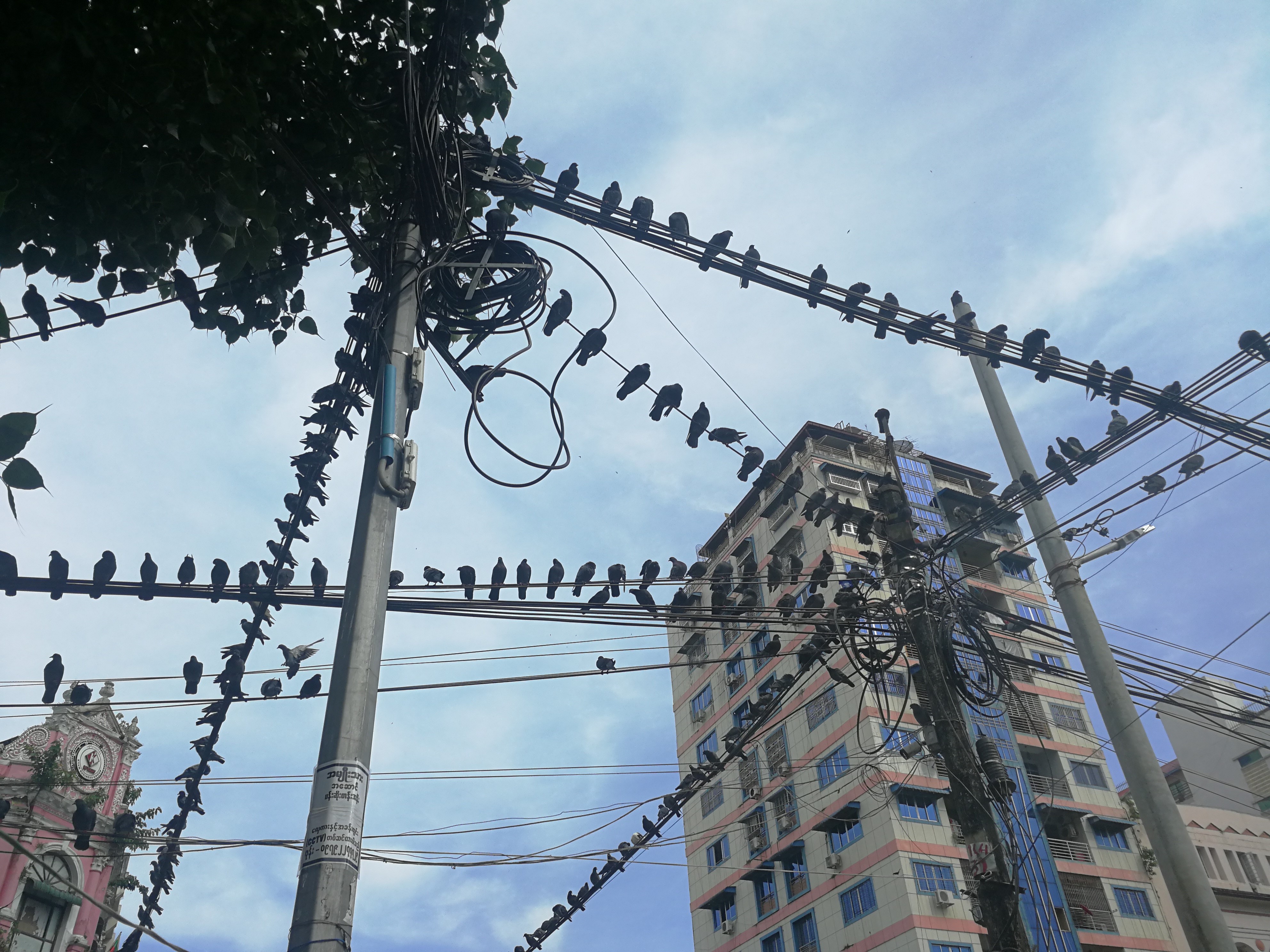 The building style is a fusion between new, old and colonial. The impressive white city hall stands tall near the famous Sule Pagoda as a reminder of colonial times, where Myanmar was under British rule. At the same time, skyscraping hotels with roof top bars overlook decrepit, colourful houses.

Webs of tangled telephone wires enclose narrow streets, where vendors sell anything from books and phone chargers to fruit and flip-flops.

Everywhere, the streets are splattered by what looks like blood. It isn’t though. The red spots are from the stimulant drug betel nuts. The nut is often mixed with tobacco and folded in a leaf which is chewed for a caffeine or cocaine-like effect.

The nuts dye the saliva red, which is commonly spat on to the street. Hence, the blood-looking stains every few steps. Taxi drivers tend to have an empty plastic bottle, they can discreetly fill up with beetle nut spit while driving.

While some people do smoke cigarettes, the dark red splatters are a more frequent sight than grey smoke.

As Myanmar has been very isolated and stayed uninfluenced by other countries, entering is like taking a step back in time in some respects. Though KFC and The Pizza Company tempt hungry passers-by like in almost any other city anno 2019, globalisation hasn’t quite spoiled Yangon yet.

Miniskirts, crop tops and boardshorts are a rare sight, even though the thermometer shows 35 degrees and the humidity approaches that of a steam bath.

Instead, women as men wear longyis. A long sarong or tube-like skirt not ideal for running, which is tied at the waist. The fabric can be any colour and is of different patterns dependent on ethnic group.

Though I’ve been told that the Korean K-Pop culture is highly popular among young people in Yangon, the conservative way of dressing still wins.

Arriving from Bangkok, the clothes is not the only thing that stands out and I try to pinpoint which sound is missing in the otherwise noisy city. The motorbikes, it turns out. Apparently, they aren’t allowed in Yangon.

No one seems to know the exact reason behind the ban, but theories range from the two-wheeled vehicles posing a threat to public safety to a former military general’s fear of getting assassinated by someone on a passing motorbike.

The only thing certain is, that traffic is bound to move slower when everyone is in a car rather than zig zagging between long queues of cars on a motorbike.

Public transportation does exist but as a tourist it’s not that easy to work out, so taxis seem to be the solution. Albeit cheap, taximeters are unfamilar technology in Yangon and there seems to be a foreigner tax imposed on everyone who can’t say their destination in Burmese.

This makes the driver service app Grab all the more tempting as the price does not depend on hair colour or mother tongue.

Being a former British colony, Myanmar used to have left lane driving.

In 1970, the then Prime Minister and President General Ne Win decided to change that rule overnight. From Sunday 6 December 1970, people now had to drive on the right side.

The only problem with that is, that most of the cars are still designed for driving on the left side. Essentially this means, that if a driver wants to overtake another car, he and the passengers involuntarily take part in the game of chicken, where one driver must swerve for the oncoming car to avoid collision.

Taxed for being a tourist

As mentioned, it is quite the task to bargain down the price for a taxi if you’re a foreigner. But this is not the only place in Yangon, blonde hair turns out to have a negative effect on the wallet.

Entering the top tourist spot in Yangon, Shwedagon Pagoda, will cost a foreigner 10,000 Kyat (5.8 Euros). If you happen to be local, you can enter the holy area for free.

Having said that, the pagoda is worthwhile a visit. The beautiful golden stupa rises above many other buildings in the city and can be spotted from a variety of viewpoints.

It’s believed to be the oldest pagoda in the world and contains hair from Buddha himself. Needless to say, it is a very sacred place for the Buddhist people of Myanmar and proper dressing is required. This means, no tight jeans, leggings, shorts above knee-height, bare shoulders or shoes. Basically, just cover up as much as possible to be on the safe side.

The pagoda is not the only place, you will come across a foreigner charge. The People’s Park offers a great view of the pagoda but will cost tourists a humble fee of 300 Kyat (0.2 Euros) to enter.

Before getting too upset about the fees charged for the mere reason of being a foreigner, it’s worth remembering that Myanmar is a country which is fairly new to tourists and vice versa.

Being white, I therefore attracted quite a bit of attention. Not only in terms of having to pay more as a foreigner, but also in a rather entertaining way.

I had people wanting photos with me, teenage girls giggling, children waving, and men approaching me only to say “hello, how are you?”, in order to practice or show off their English skills.

You might find that having to stop and pose for pictures slows down the day a bit, but other than that there is no reason to feel uncomfortable in any given situation.

The humid climate isn’t exactly ideal for surprise photo shoots, though, so leave your vanity at home, pack your most conservative attire, your wallet, your camera, your best smile, a little bit of patience and go visit Yangon.