On Friday November 26th 2021, the latest Fitness studio 24/ Seven opened on Sukhumvit Road near Nana Bts station. The first was established in 2018.

Who stands behind this gym? A Swede named  Christian Ask. In 2003 he opened the first gym in Malmö, south of Sweden. In 2005 another gym and also an office in Lund opened their doors, and it is Fitness 24 Seven’s flagship. Already in 2006 there were 10 gym in Sweden and since then, there  are many more.

The journey started well and Christian decided to expand and 2011 the first gym was opened in Oslo, Norway. The same year the Fitness 24Seven founded a charity organization called Esperanca and still today they work hand in hand. In 2012 Finland got its first Fitness 24 Seven gym in the capital Helsinki.

Everything went so well and became very popular so in 2017 Fitness 24Seven established its first gym in Colombia. In 2018, it was time to start in Asia, and Thailand got its first studio, Bangkok Summer Hill.

It has been a quick journey, from the first gym in Malmö until today.  Fitness 24Seven is to be find in 6 countries on 3 continents nowadays and the journey has not ended yet. 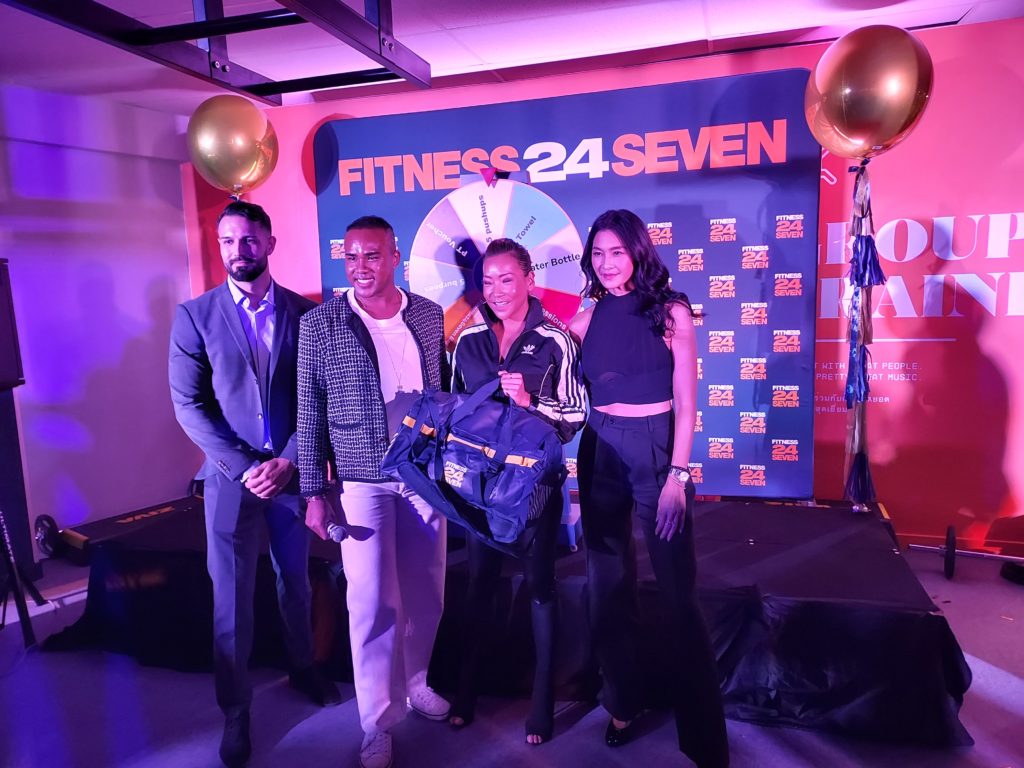 Christian admits that it has been a very exiting journey. “Our vision is to lead people to a healthier life no matter who you are or where you live. There is no excuse, we are open 24 hours seven days a week, so it should not be a big problem to start your training. We provide the best value option in the fitness industry in Europe, Asia, Central-and South America. We do this through availability, hospitality, and functionality at an attractive price”.

On the inauguration evening, the studio was decorated with yellow and blue ballons, a great buffet, sparkling wine, loud captivating music that pleased the many sportive guests. 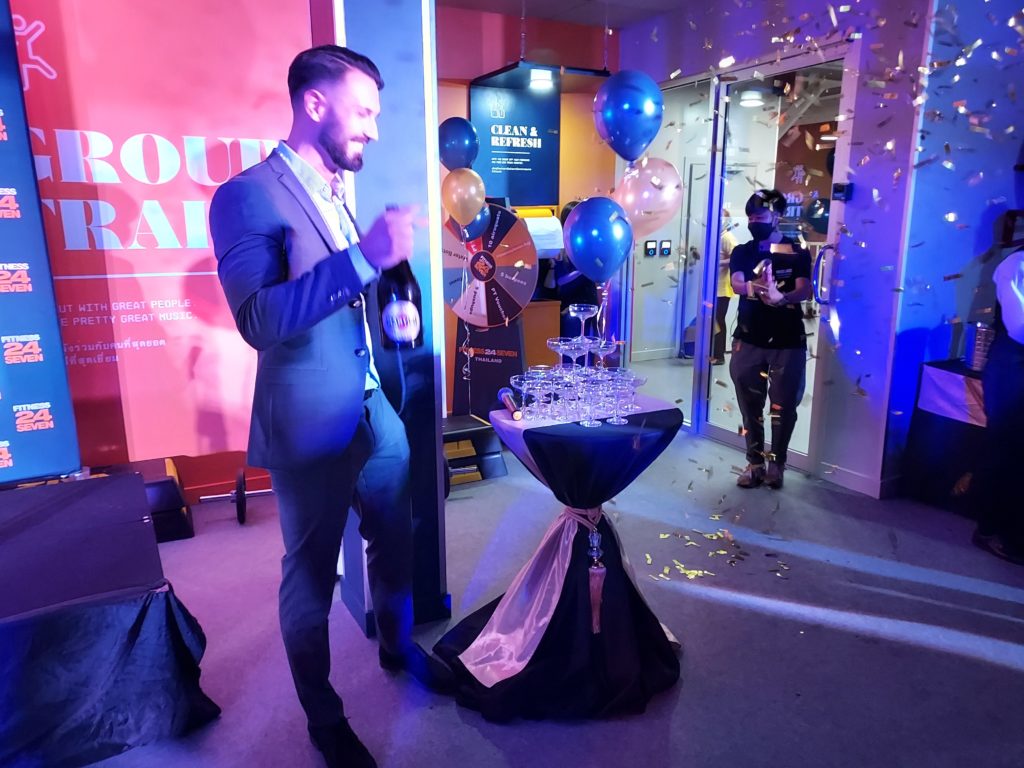 Before we could enter the gym, we all had to make a swab test and when that was done and we were negative, we were asked to take the stairs up to the first floor. Here on the small stage, the PT’s showed their well-trimmed bodies . It was a kind of disco feeling with disco balls all over. The manager Mr. Stefan  Szot welcomed all guests and among them the Swedish Ambassador H.E. Jon Åström Gröndahl and the president of the Swedish/Thai Chamber of Commerce Mr. Peter Björk, and asked the two guests of honor to enter the stage. The Ambassador looked real hot in a fancy jacket and sneakers and he laughed when he was asked to do some push-ups under much cheers by the audience. Mr. Peter Björk had to proof how many kilos he could lift and did quite well. They were both awarded with a membership. 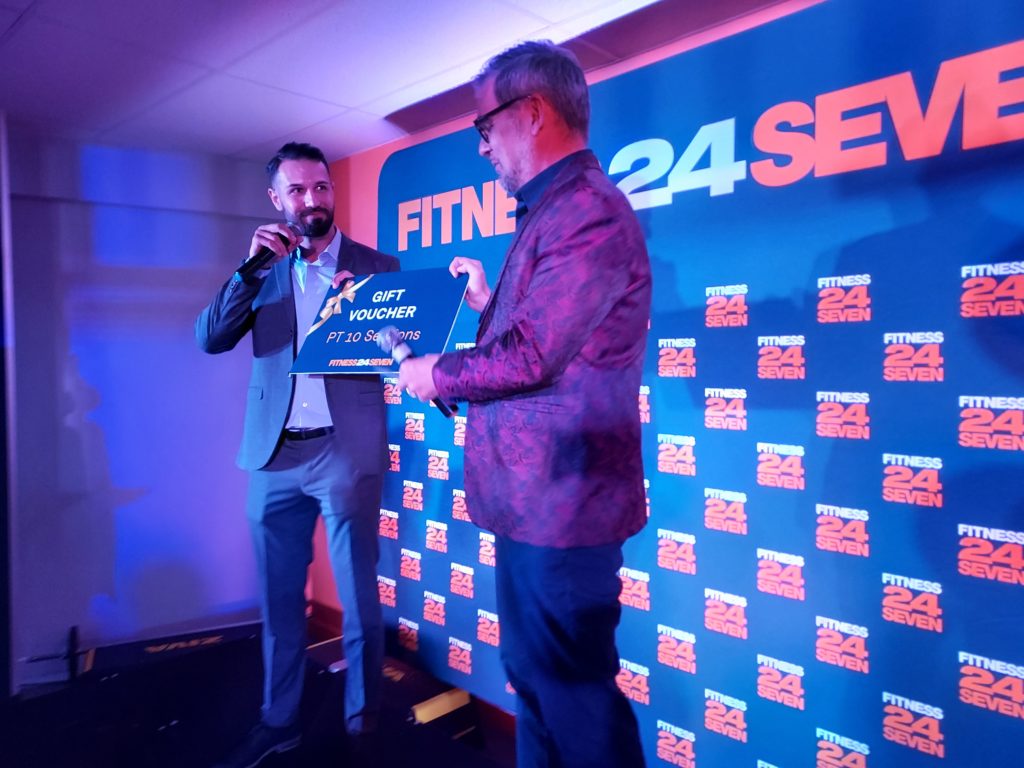 As at most inagurations, the ribbon has to be cut and it was done by the manager Stefan and Ambassador Jon. 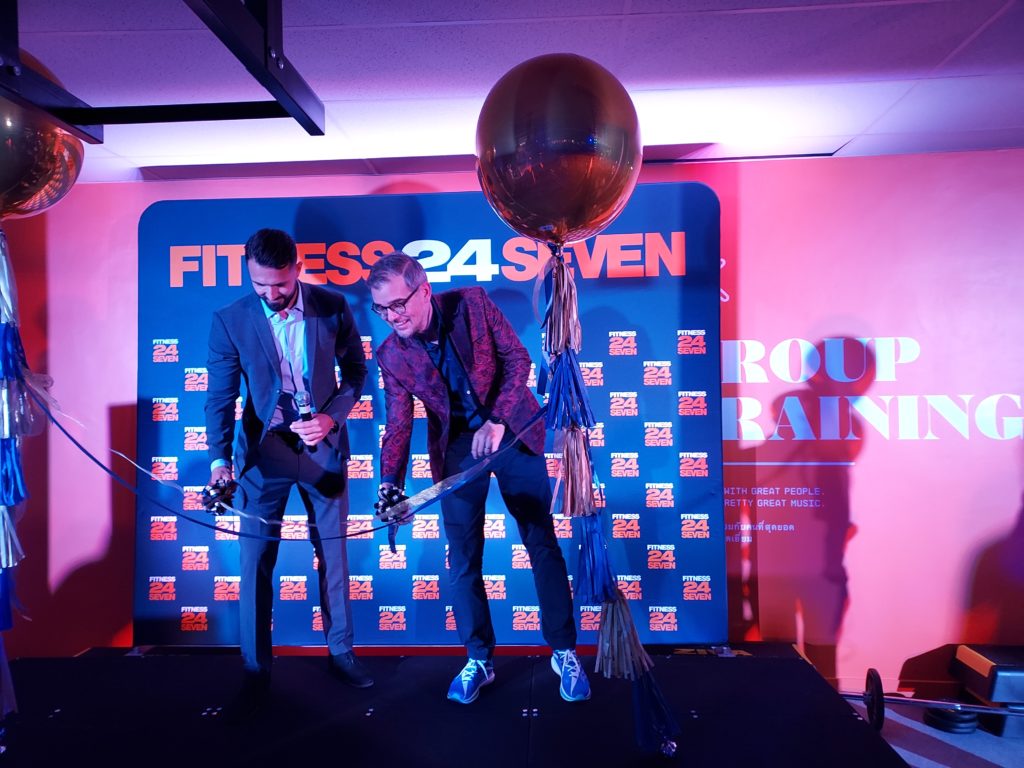 The party could start. A memorable opening of Fitness 24 Seven.

If you haven’t been to a fitness club yet, have a look at this one. It’s modern, cozy and welcoming. There is no reason for not starting a healthy life today.

Go for it, it’s never too late!