For 3 years the Ivar Aasen topdeck project has been under construction in Singapore, and the platform deck for the Ivar Aasen project is now on its way to Norway after sailaway from the yard area in Singapore on Monday 6 June 2016. Finishing a project as giant as the Ivar Aasen topdeck deserved a proper celebration, and Det Norske (The Norwegian Oil Company) made sure the sail-away party were completely marvellous and something very special. As Head of Communications and Music at Norwegian Seamen’s Church Singapore expressed it himself:

“Det Norske is a new role model on how to celebrate properly. The way the Det Norske has marked this success of project is very “un-Norwegian”, since it is not typical to make such a big and formal celebration,” Øystein Tønnessen said. “They went all in.”

Rolf Jarle Brøske, Head of Communication to The Norske, travelled to Singapore to begin a whole weekend of celebrations for the completed Ivar Aasen topdeck project. Together with the Det Norske and the Norwegian Embassy in Singapore, they brought the famous Norwegian Nidarosdomen’s Boys’ Choir consisting of 60 boys to Singapore to sing at the celebrations, and also to give a public concert to Singapore to show their gratitude for Singapore. Det Norske also made a personal donation of SGD 2000 to C.I.T.Y, a charity organisation in Singapore, and furthermore, they raised SGD 20.000 during the concert, which all goes in full to C.I.T.Y, too.

The official Sail Away party began early in the morning on the harbour to Sembawang Shipyards on 21 May 2016, where the Boys’ Choir pleased the guests’ ears, and Singaporean dancers entertained the eyes. The whole dock was decorated with white chairs, banners with the three-coloured logo of Det Norske, and dressed up dragons. Before noon, there was the inauguration of Det Norske and Sempcorp Marine. The celebrations continued, and in the evening a formal galla dinner were held at the Ritz-Carlton hotel, where guests and people involved in the Ivar Aasen project could again could enjoy the magnificent tones from the Boys’ Choir, followed by a five course dinner of Singapore’s finest cuisine. Inside the huge entree to the big dining hall, a miniature model of the whole Ivar Aasen platform were placed in the middle of the room.

“I feel very happy, because I have been there from the beginning to the end. It is just like watching a baby grow up, and just like a baby, the project has meant a very great deal to all of us,” says Dr. Shi Ping, Discipline Manager at C Structural Lead. 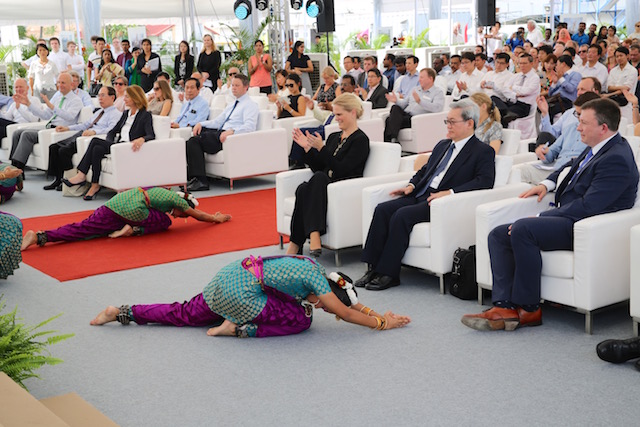 Now, three years of work have been completed to finish the topsides of Ivar Aasen. Many of the workers to this project had travelled half the world to work on this project, and for many, now it is time to go home. A mixture of happiness and proudness filled the atmosphere in the entree of Ritz-Carlton.

“I feel there are many mixed feelings here tonight. It’s a little sad that our big journey here now is finished, but on the other hand, we are so happy we made it, and many people are looking forward to come back home to Norway,” says Stine Madsen from Det Norske.

One of them is Roar Gullvik, leading mechanical supervisor at Det Norske. “I really look forward to come home and experience the four seasons of Spring, Summer,  Autumn, and Winter again,” he says.

The Sail Away-party was also an excellent event for new business opportunities.

“The project was big, and even if we have been working on it for 3 years, I see many new faces here tonight. I believe tonight is great for networking for future jobs in this industry, and I would love to work with Norwegians again. They are gentlemen, and very easy to work with,” said Dr. Shi Ping.

“It has been a wonderful ceremony,” Norwegian Ambassador Tormod Endresen said.

But the Ivar Aasen dventure is not over yet. “It’s not over until December, when the Ivar Aasen rigg will be completed in Norway,” says Helge Lie Andersen, V.P. Business Development at Det Norske.

The shipment en route from Singapore contains more than merely 13,900 tonnes of steel. There is also advanced equipment, much of which has been delivered by Norwegian suppliers. The platform deck has systems for separation of oil and water, water treatment, gas compression, various measurements and flare boom.

The platform deck is 108 metres long and 38 metres wide. The Ivar Aasen field is located west of the Johan Sverdrup field in the North Sea and contains approximately 204 million barrels of oil equivalent, included the Hanz deposit. The economic life of the Ivar Aasen field could be 20 years, depending on oil prices and production trends. The operator is Det norske, holding a 34.8 per cent ownership.

All photos are kindly borrowed from Det Norske.