With the slogan “come as a stranger, leave as a friend,” Amed Jepun Divers on the island of Bali in Indonesia sees many return visitors. The small dive shop is the brainchild of a Danish and Canadian couple Kira Strand Hald and Serge Desrosiers who in 2015 decided to throw caution to the wind and follow their dreams.

Located in the coastal town of Amed, around a three-hour drive northeast of Ngurah Rai International Airport, Amed Jepun Divers offers courses from beginner to divemaster level at some of the most famous dive spots in Bali, if not the world. And while Kira says that she misses her family and friends in Denmark, she is not looking back.

“I have no regrets. I follow my gut instinct and so far it hasn’t gotten me into too much trouble. In many ways, I’m an ‘all in or all out’ type of person.” Kira grew up in a small town of around 10,000 people called Espergaerde 40 kilometers north of Copenhagen. As a girl, she spent a lot of time on the beach and in the stable with her horses before moving to the capital to work and study.

During the summer of 2013, she traveled to Indonesia where she met her future business and life partner, Serge.

“We met on Gili Trawangan, an island just off the coast of Bali, scuba diving; Serge was my Open Water course instructor. A bit of a cliché, but that’s how it happened. I was still studying at the time and about to write my thesis.”

“From January 2014, I was in Indonesia and Thailand almost every second month—writing and diving—until I left Denmark on a one-way ticket in September 2014. I sold my apartment, did my final exam on a Tuesday and left Saturday.”

After leaving her home country, Kira moved to Koh Phi Phi in Thailand, as it was where Serge was working as a diving instructor at the time. It did not take long for the duo to decide to move back where their story first began, Bali. They were attracted by the small-town atmosphere of the fishing village of Amed, and its potential as a diving and tourist destination.

“One of the reasons we decided to open a dive center here is because Amed offers a lot of shore diving with an easy access to a coastline full of amazing dive sites. This meant that we didn’t have to buy a boat, a very big expense that would have been tough on our budget,” Kira says.

“We have seen some big changes since getting here five years ago. The place is growing by the day. When we first came to Amed in 2013, you couldn’t even find an ATM here.”

When Kira and Serge first moved to Amed, they found that most of the dive centers in the area were little more than booking offices, where guests would book in, dive and then go home. Having experienced diving centers in Thailand where guests would hang out after diving to chat, play games or have a drink, they decided to follow suit.

Amed Jepun Divers was born with this idea in mind.

“We are here because we love scuba diving, and we want our guests to have an amazing experience—we realize that diving is not a cheap activity. So with us, guests can expect to not feel like just another number. We dive in small groups to give our guests the safest and most personalized experience possible,” Kira says. 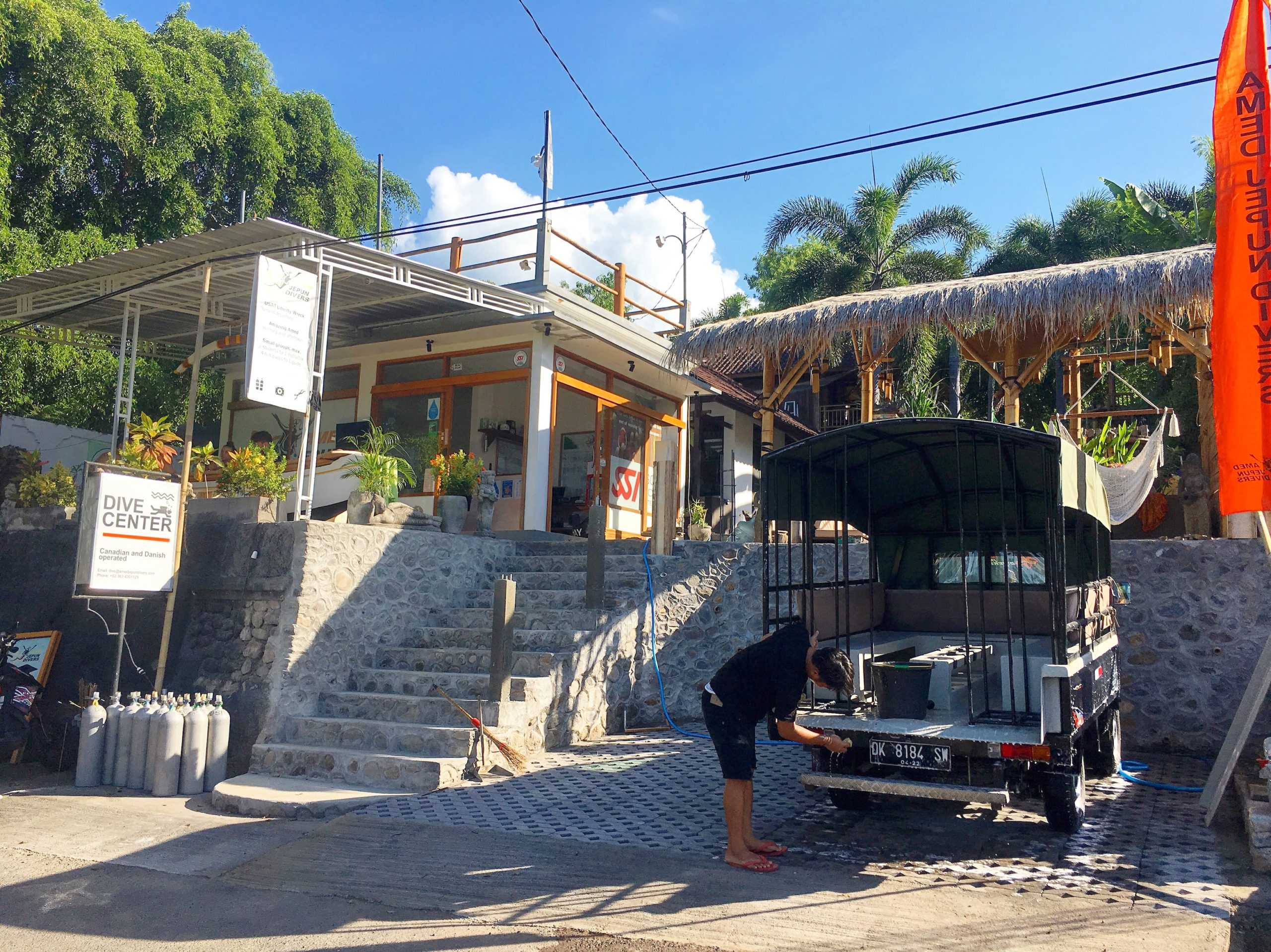 Opening the dive center in 2015 was a big step for Kira, since she only started diving in 2013. Luckily, her partner Serge already had years of experience in the diving industry. Throughout the journey, Kira never doubted that the duo would be able to deal with the life-changing decision.

“Sometimes you just have to give things a go. Give it everything you have, and if it doesn’t work out at least you’ve tried. I like the saying: ‘don’t be afraid to fail, be afraid not to try.’ So we did try, and here we are four years later. It’s been a crazy roller-coaster ride, but totally worth it. If someone would ask me today if I would do it all again, having known everything that we know now, the answer would be a definite yes. Saying this, I’m glad we’re not starting from zero tomorrow.”

The road to success has not always been smooth, with each step of setting up the business providing life lessons and valuable experience. Kira says that the biggest challenge was not knowing the local regulations and how things are done in Bali.

“This experience has been about learning by doing, being burned and being ready to pack up and leave, then refusing defeat, finding good people, a good lawyer and so on. Up until now we have met challenges, and I’m sure we haven’t seen the last of it, but I hope and believe that we have passed the most difficult periods.”

“We are not feeling sorry for ourselves, we know fairly well that we are not the first or the last to face adversity, but I’m super happy about where we are now and what we have learned along the way.” Kira and Serge have no plans to leave Amed anytime soon. They are eager to continue sharing underwater adventures and the beautiful area of Amed with divers from around the globe. And while they are not looking too far into the future, they are already contemplating a project or two.

“For smaller projects, maybe a nice bar made from an old jukung [small Indonesian outrigger boat]—like to use as many recycled materials as possible when we build. Just for people to get some nice juices, coffee, and maybe some snacks and beers after diving,” Kira says.

“Later on we might also build a pool. We still have a bit of space to play with, so let’s see what fun ideas we can come up with. When nothing is sure, everything is possible.” View all posts by Anita Surewicz →