At last, a new start-up that delivers 360-degree solutions and solves the pain points of freelancers and the self-employed – a group of people that Doerscircle call Independent Doers. Danish Helle Priess is the brainchild behind this highly relevant concept.

‘What took this so long?’ was my first thought when I came across the Doerscircle start-up, currently based in Singapore. Your first assumption may be that it’s a community platform for creative people but it turns out to be something much grander and even better, than just that.

‘Doers’ refers to any individuals, even those working for corporations, because the trend is that fewer and fewer people will be traditional employees going forward. ‘Circle’ refers to the concept of 360-degree services – services across verticals that are based on recognising and serving the individual – at an affordable price.

A Doer by heart

Understanding how the idea behind this concept was born requires going back to Danish entrepreneur Helle Priess’ own experiences and frustration ten years ago, especially relating to insurance and her shift from working in the corporate world to becoming self-employed. This also gives the opportunity to learn more about Helle, a keen example of a Doer, and her long-lasting career in Asia.

As a child, and seemingly out of nowhere, Helle gained huge interest in China, wanting to learn all about the country. At that time, the large country in East Asia was still somewhat exotic back in Denmark.

“I forced my mother to bring me to the library to read books about China. When I graduated from high school, I left for China to study at the University in Beijing, where I also–as the only non-Chinese– was playing badminton with the Chinese national team.” Helle remembers.

Further studies followed at Copenhagen University, but Helle did not miss the chance to join summer university courses in China. Armed with a state scholarship she continued her studies there, including Chinese language and economy studies – after which she did not return to Denmark.

Instead she was recruited, while still studying, to work for the Danish founders of Bestseller Fashion Group China, in building up a hugely successful business.

“These guys really gave me a chance and a huge opportunity to learn and develop. I was kind of just thrown in and needed to find out how to get things done. I was given enormous responsibility very fast and still refer to my Bestseller period as one of the periods of time where I’ve learned the most, the fastest, about doing business. Also, I learned how much it means to give talent a chance; to believe in people and to develop them” she says. From fashion to pork stomachs

Helle however left Bestseller before she turned 25. “In my last year I kind of worked around the clock. Not because I was asked to, but because it was growing fast and I really enjoyed it and had fun. At some point, however, I thought: ‘Maybe I should also try something else; get some other experiences?’”

Building up Danish Crown’s subsidiary, Emborg, from scratch in China became her next challenge. The business concept was based on the fact that what was seen as waste in Denmark was among the most expensive things you could buy in the supermarket in China.

“It didn’t make sense to me that what everyone wanted to buy in this part of the world was being thrown away in another part; even paying to get rid of it. I travelled around China figuring things out, and built this business from zero to a successful one within the first year already. From there we expanded the business quite significantly to other relevant areas”

“The products were not that sexy; coming from selling fashion–with catwalks and fashion shows–to selling pork stomachs, ears and tails. But it’s an interesting story, about taking a non-contributing part of a business and moving it up to a significant top- and bottom line contributor.”

When Helle decided to leave the corporate world in 2008, she had by then learned tons that would come to good use when seeking entrepreneurial adventures but she was in for an unpleasant surprise.

The Dane asked the insurance company, with whom she had a longstanding relationship, for her policies to be moved to her own name but was met with a firm ‘no’ as answer. The insurer told her it was because now she was on her own. Welcome to the club of the self-employed…

Helle could not believe what she was hearing because, besides being healthy and sound, she was being loyal in offering for them to keep her as customer.

Eventually, they came up with an insurance offer for her – it was five times more expensive than while she had been under corporate coverage, and with less favourable terms and conditions to boot!

“Among other things, I learned that as an individual I couldn’t get income protection and critical illness insurance from any provider at that point of time. Also, I couldn’t get the same coverage levels as I was used to under the corporate policy.”

Eventually Helle saw no other choice than to swallow her incomprehension and dissatisfaction and accept her previous insurance company’s new “discounted offer”, as it was the best option she could in fact find on the market.

“The frustrating bit was that it wasn’t confined to insurance; it was the same when I spoke to the bank to renew my credit card. ‘Do you have any pay slips?’ they requested.”

Until today insurance coverage remains so much more expensive for an individual than for corporates.

The insurance and banking incidents really annoyed Helle and stayed in her mind for years – until she a few years back couldn’t open any news site or news paper without reading about the gig- and freelance economy that was exploding. The concept of digital nomads was also growing very fast.

“So I started looking into the figures and the most conservative one I came across said that a third of the global workforce was already self-employed. In 2019, according to World Bank, it was 48 percent on global level. 48 percent!” exclaims Helle.

“That was really an eye-opener. And even though the group is naturally differentiated I found that: ‘Something’s completely wrong. There’s disconnect and an unhealthy imbalance.’” 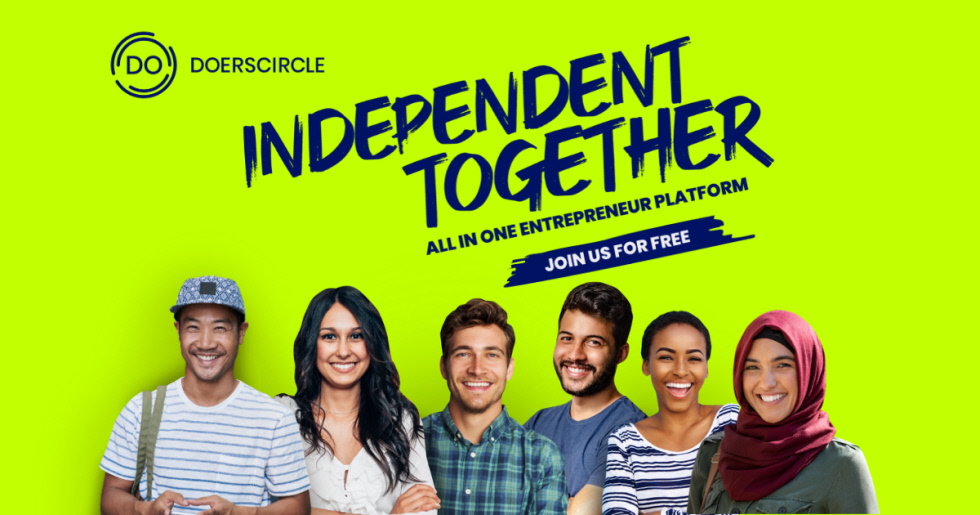 “Looking at how everything is structured, where the world to a very great extent is still designed by and for corporates, and based on corporate employees’ needs, it doesn’t make sense. I’ll even argue that the solutions that are offered corporate employees today in most cases are not individually targeted. I think it’s the whole way that solutions are structured we need to look at. We’ve already become very independent. We’ve already started living and structuring our lives differently. Our needs and demands have changed and will continue to do so. This is not a trend. This is a shift in the way we live and this requires changes. We simply need to look at the individual, and this new way of living and working, in a different way; and we need to empower the Independent Doers”

“In many places you still need to fit into a traditional box that is no longer the reality. It simply doesn’t represent the way that we live and structure our lives today.”

“We have started out with self-employed people – Independent Doers – because this is the most underserved group of people. However, it is really about the individual on a higher level.

Doerscircle is on the path of being a 360-degree support system. The aim is to empower Independent Doers to focus on what they do best, enjoy the most and where they add the greatest value – instead of spending valuable time and energy on things that they’re not the best at, where they might not have the insight and which does not add any value up front.

“The solutions on our platform are targeted to the needs of self-employed people – Independent Doers. We are all about securing all the solutions under one roof that you need to run your business and to some extend your life, making these solutions targeted to your specific needs, and at the best possible price points that you can get as an individual.”

Doerscircle is live, and while yet at an early stage, it already has members worldwide. The start-up is rapidly expanding and already stretching its services to cover Southeast Asia. The majority of its local services have been established in Singapore so far. Doerscircle functions as a one-stop-shop. Members get access to everything from incorporation and corporate secretary services, to employment pass applications and renewals, office space through the Doerscircle Office Pass, marketing and PR services, favourable fitness memberships, a range of insurance solutions and much more. All at favourable and Doer-friendly price points. And there’s more to come. In mid September Doerscircle also announced their new landmark collaboration with AON, a leading global professional services player and one of the biggest insurance brokers of the world.

A press release from Aon states that they, through a strategic partnership Doerscircle, will develop and source commercial, risk, and health insurance solutions that address the needs of smaller SMEs and independent workers.

“We have seen an enormous interest in what we do. And we see that Covid-19, though on an unfortunate background, is just making it even more important and relevant. The pandemic has further accelerated the development and the shift towards remote work and more flexible careers. However, and unfortunately, structures and support is still not in place at the level that it should be. This is what we’re here to challenge and change.” ends Helle.

One Comment on “Doerscircle: new platform and solutions for self-employed – entrepreneurs, freelancers”