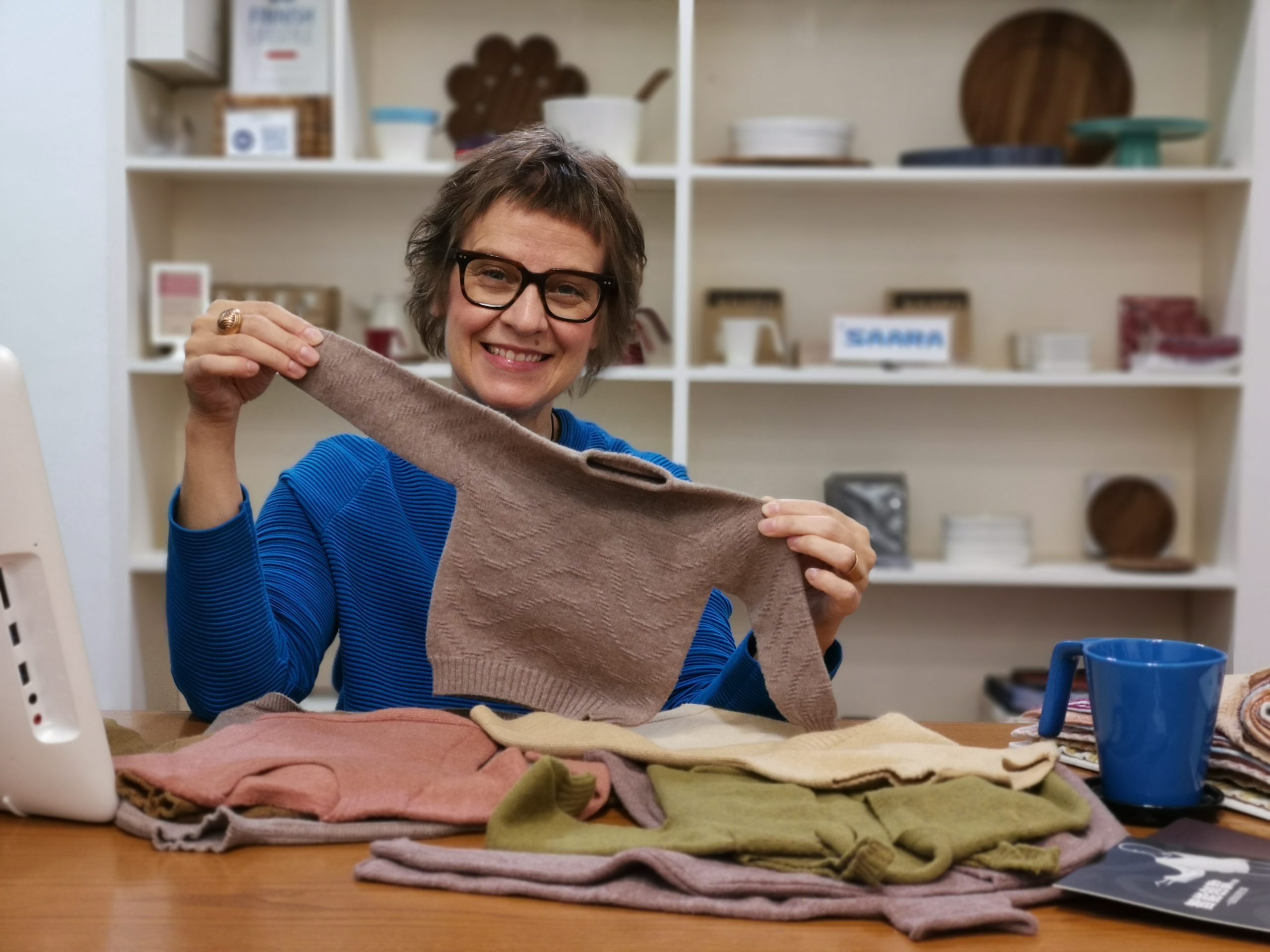 Mid-Levels. That is the rather unimaginative name given to the residential area half-way up Hong Kong’s famously steep Victoria Peak. Residents enjoy the use of the world’s longest outdoor escalator system which takes them down to bustling Central in the mornings but changes direction after 10.00 am.

Unfortunately the escalator was in some state of disrepair when I made my mid-morning ascent to Satu Vuorio’s studio, which she shares with her writer husband. It is on a lower floor of her apartment building near the escalator’s summit.

My breathlessness was soon forgotten after spending a few moments in Satu’s company. The warm welcome, easy manner and animated enthusiasm contributed to a very enjoyable morning spent with her.

Early Days
Satu grew up in the small town of Espoo, just a stone’s throw from Helsinki. After an outdoor childhood enjoying the beauty of the nearby forests and lakes, mostly in the company of her identical twin Sari, Satu embarked upon a design course at Helsinki’s University of Industrial Arts (now Aalto University). Just before graduation, she and Matti, a fellow student, were chosen to take advantage of a six-month internship organized by W. H. Chow – then Hong Kong’s Honorary Consul for Finland.

The two young Finns were based in Hong Kong but travelled extensively into nearby regions of China in order to research factory facilities.

That was in 1992, and through connections made during this time, she was offered a job by local company Prima Design Systems. The company developed award winning computer software for the design of knitwear and fashion items. Satu’s role was to manage the design and support team. While at Prima, she met her future husband, Hong Kong environmental engineer James Tam.

A Creative Venture
After ten years at Prima – three years at the French owned Lectra Systems, and the birth of a baby girl – Satu set free her creative instincts and founded her current enterprise, Saaradesign (named after her late grandmother).

Through the company, Satu has been able to develop her design skills in a different direction. She showed me some of the company’s products – elegant hardwearing ceramic tableware in a variety of sizes and colors, reflecting Nordic simplicity and practicality. As she says:

“A good design balances style and function and should be for everyone.”

Saara items are sold in various outlets in Hong Kong including Sverigeshoppen in the tourist area of Tsim Sha Tsui, and the Prestige Christmas Fairs at the Conrad Hotel.

Sometimes Satu shares ‘Pop-ups’ which are temporary outlets in which empty commercial premises are utilized for up to a month. In the future she intends to offer Saara tableware for purchasing online.
Satu has not abandoned the world of computer aided design totally. She is currently very excited about a breakthrough in knitting technology that she has been involved with. Her work, with the local company ASP Creation, has aided the development of a software that enables the knitting of one-piece seamless sweaters. It is something like 3D-knitting and, according to Satu, a revolutionary development the first of its kind worldwide
.
Hong Kong Life
While maintaining her Finnish roots and being proudly patriotic, Satu has embraced the bustle of her adopted home, and after more than twenty-five years in the Territory she is committed to Hong Kong. She is emotional about the recent political turmoil, describing it as “heartbreaking.” The troubles have not made her want to leave, however.

“Although Finland remains my homeland, Hong Kong is my home and I love it here.”

James’ relatives have welcomed Satu with open arms and her ready smile and friendly disposition have ensured warm relationships with her in-laws. She is an accomplished cook who thinks nothing of entertaining James’ many relatives during local festivals such as Chinese New Year. She has embraced Hong Kong culture and after more than twenty years in the Mid-Levels apartment, feels very integrated in her locality.

Satu’s family includes a bonus daughter Claire, who is in her twenties and currently working in Canada as a graphic designer, and daughter Saara, now 15 who studies locally with the English Schools Foundation. The family members are truly international and Saara effortlessly switches between Finnish, English and Putonghua (Mandarin).

Satu has also been learning Mandarin. Her linguistic skills are impressive and include Finnish, Swedish, English and German.

Finnish Ties
I asked Satu what she missed about Finland. It was no surprise, that she mentioned the clean air, wooded countryside and friendly people. But she also fondly recalled cold, dark winter days with their unique stillness and the way in which they made her feel calm and close to nature. The contrast to Hong Kong is extreme but Satu returns regularly for a Finnish ‘fix’. She also misses fresh seasonal fruits and vegetables and her favorite dark rye bread.

Of course, family and friends are greatly missed, but the frequent visits help to alleviate this. She maintains very close contact with sister Sari, and the intense bond established between the twins since babyhood is rekindled as soon as they are back in each other’s company.

Satu displays some typical Finnish characteristics. A love of home and family, a calm non-pushy gentility, and a strong work ethic were all conveyed during our conversation. Satu practices yoga techniques and meditation daily to relax from her hectic schedule. She is also an advocate of Chinese traditional cures and remedies and she often calls upon a Chinese Medicine Practitioner (from Holland!)

The Hong Kong Finnish community is only a few hundred strong and while Satu maintains good friendships with fellow countrywomen, she has friends of many nationalities. Satu has noticed that fewer Finns are relocating and sadly she thinks that Hong Kong’s political upheavals will do lasting damage to the region’s commercial attractiveness.

A Cup of Chinese Tea
After our conversation, I was invited upstairs to Satu’s lovely home with its outdoor area of greenery – a true oasis amidst the towering blocks of Mid-Levels. I was warmly greeted by James who has recently retired from engineering to embark upon his second career as an author. He has already had two books published and is working on a third.

Satu produced fine Chinese tea and a delicious home-made blueberry cake and the three of us chatted amicably before I took my leave.

The path next to the escalator can be taken at a brisk pace downwards. As I strode, I looked at my watch and was astounded that two and a half hours had passed in the twinkling of an eye. I had that warm feeling which comes after spending time with an exuberant and truly likeable person – and Satu is certainly one of those.