When you play futsal without air condition in Thailand, well, it can be a little hot,” 12 Danish ladies agree.

The Thai humidity seems to be a mere trifle in the pursuit of a World Championship, because besides being professional athletes, all these ladies have another thing in common: they are all deaf.

Together these women makes the Danish Women’s National Deaf Football Team, and they arrived in Bangkok on 15 November 2015 to participate in the World Deaf Futsal Cup 2015. (The main difference between futsal and football are that futsal is played indoor and on a field the same size as a handball court).

The ladies and the rest of their team consist of total 25 people, and they have all contributed to go far in the World Deaf Futsal Cup 2015. It was proved when they won their first match against England on 21 November 2015.

“We were determined to win this match! It was a huge success to beat England!” futsal player Sarah Lind ‘says’ – in sign language .

Unfortunately, they lost 3-8 to Iran on Sunday. It means they can not achieve the first prize, but on Tuesday they will meet Norway to fight for a 9 or 13th rank in World Championship.

“We won over Norway last year to the Final Cup in Europe, but that does not mean we will relax for this match. We need to win this game to still remain in the top 10”, says futsal player Nana Søltoft. The ladies have already been practicing intensely. Eating right, getting enough sleep, exercising regularly and having sports massage are important elements to maintain when you are qualified for a World Championship. It also means they have not had time to explore the hosting country of the World Cup yet. For some of the players this is their very first visit to Thailand.

“We look forward to experience Bangkok after we finish the last match. Our training takes all of our time, and so far our only “sightseeing” has been 2 hours shopping in one of the big malls. But we are not here on holiday, we are here for a Danish victory,” explains teamplayer Britt Nøhr.

Futsal requires more training than football for these ladies.

“Futsal is far more complicated for deaf people than what regular football is. The field is smaller, and everything goes faster. We have to concentrate on both our translator, the ball and our other teammates”.

Facing the challenge of futsal has only given good results to the Danish ladies, and for them playing futsal and football together are much more than just a sport.

For 16-year old Emma Tietze the football team gives her freedom to “be deaf”.

“My hearing is considered to be deaf, even if I can hear a little. In school I’m wearing a hearing aid, but together with my team on the football field I don’t have to. It feels good to feel ”even” and that way get a little of both worlds”.

“Even if the age difference ranges from 16 to 41, we make an amazing teamwork, both as players on the field, and friends in private life. We have a strong cohesion and help support each other,” futsal player Christina Hausgaard says.

They are also supported on their more than 600 fans on Facebook, who have been following them online and in real life for the World Cup. The ladies have daily posted news and videos, and beside the serious sportsnews they also have time to post “Dagens bommert” (=Slip of the day).

“Being deaf can sometimes be a challenge. One of our slips was when a group of the teamplayers and the coaches should take the elevator. We all live on different floors and therefore had to press on different buttons inside the elevator. When I asked “where do you live?” in sign language, the answer was “In Denmark!”, laughs Christina Hausgaard.

On Monday 23 November the Danish ambassador Mikael Hemniti Winther invited the ladies for buffet dinner at the Danish Embassy in Bangkok, where they were shown a little piece of Denmark in Thailand. In return he was taught sentences in sign language and the bubbling energy from a Danish sportsteam. The ladies were delighted with the invitation, and they were all given the last support before their final match against Norway tomorrow. Even if wine and beer was served for the evening, the Danish ladies only touched the soft drinks.

“When you train for World Cup, you have to say no to a lot of things. Back home you have to skip nights on the town, because you have to focus on your exercise and to stay in your best condition”.

With that being said, all the Danish ladies agree that tomorrow they will cheer in champagne, when they hopefully get in the top 10 in the World Deaf Futsal Cup 2015. 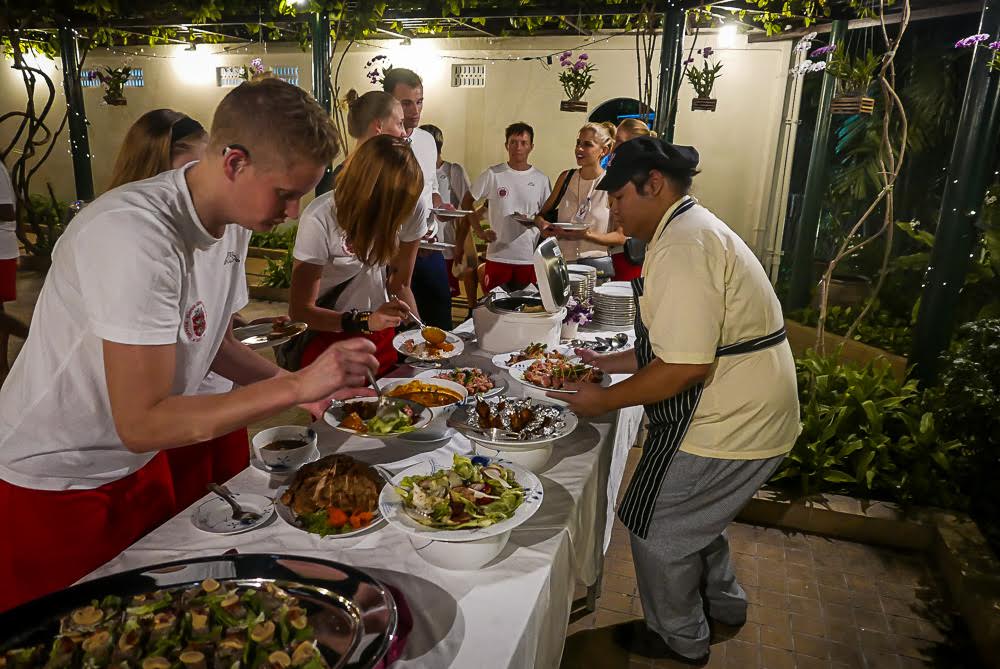 We wish them all the best luck from ScandAsia.