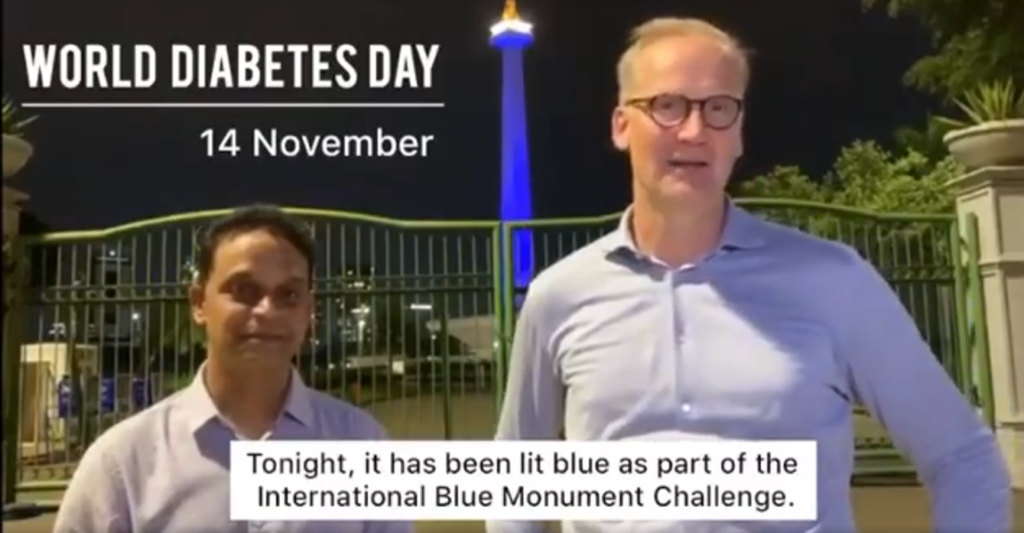 On the evening of 14 November, in commemoration of World Diabetes Day, and as part of the Blue Monument Challenge, the National Monument (Monas), was lighted with blue lights to symbolize the official color of Diabetes Day.

The Blue Monument Challenge shines a light on diabetes and was launched in 2007. Since then, thousands of iconic sites and buildings in over 80 countries have gone blue to raise awareness about diabetes.

The National Monument is a 132 m obelisk in the center of Merdeka Square, Central Jakarta, symbolizing the fight for Indonesia and during the lighting, Danish Ambassador Lars Bo Larsen and Novo Nordisk General Manager Anand Shetty revealed the monument in its full glory

The pair also advocated for the importance of diabetes care in Indonesia as it is an increasing threat to public health and the country has recorded an almost doubling in the figures of diabetes during the pandemic.

According to Ambassador Lars Bo Larsen, it is important to increase awareness of this threat to “ourselves and our families”. Novo Nordisk General Manager Anand Shetty said that with more than 19.5 million people living with diabetes in Indonesia, there are lots of possibilities to do and change the lives of these people.

“Together with the Ministry of Health and the Embassy of Denmark in Indonesia, Novo Nordisk is committed to increasing awareness and education and also improve the access to diabetes care in the country,” he said.