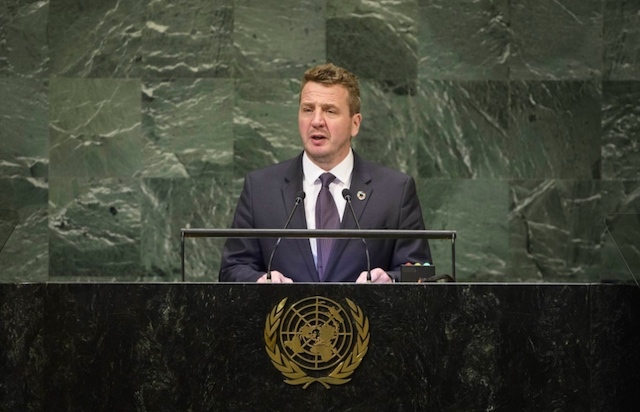 The conviction of one of the best known and respected journalists in the Philippines, Maria Ressa, plainly shows that there was every reason for the United Nations’ Human Rights Council to spotlight the status of human rights in the Philippines. says Foreign Minister Gudlaugur Thor Thordarson (Independence Party).

“We have expressed grave concern over the status of freedom of the press in the country, and this outcome is one of many indicating that the situation is deteriorating,” he adds.

Thordarson met Ressa when she was in Iceland at the end of last year. She then thanked Icelanders for their primacy in the passing of a resolution on the situation in the Philippines in the UN Human Rights Council.

“She said that it was important for people like her – fighting for human rights, freedom of the press, and freedom of speech – that the world’s spotlight was on the situation in the Philippines. She told me that there were 11 court cases about her going on that could mean prison sentences of many years and death threats as well. Even though this worried and frightened her, [Ressa said that] she could not give up and disappear, but she was nevertheless ready for the worst,” said Thordarson.

“In our view, this starkly shows there was every reason to present the resolution we did in the Human Rights Council. It was very moderate. We simply asked the UN’s Human Rights Centre to prepare a report on the human rights situation in the Philippines.”

This report came out recently, as previously reported.

“The Human Rights Council will specifically discuss the report toward the end of this month, and Iceland, of course, will speak since we are viewed as the matter’s instigator. I say what I told Maria Ressa – that Iceland will not stand idly by on these matters, and we will, of course, exert ourselves as much as we can,” said Thordarson.

“We will not hesitate, and this is, of course, not limited to the Philippines. We started off in the Human Rights Council by pointing out the obvious – that there should be special requirements for those in the Human Rights Council. This is one of the reasons why we took up issues of the Philippines and Saudi Arabia, and we will certainly continue this even if we do not have a seat on the council. We will, for example, heed the challenges we get from human rights pioneers and human rights organisations and the other states with which we collaborate most closely.”