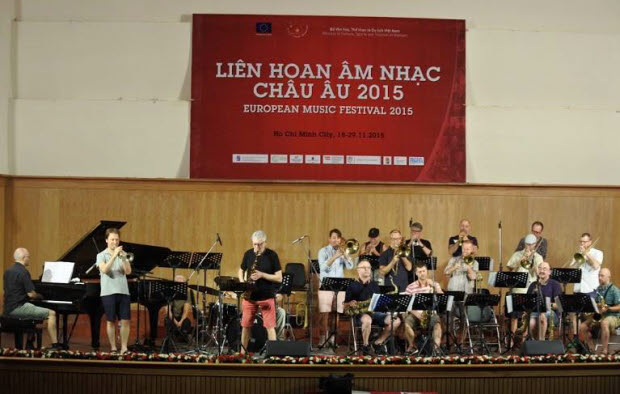 The Swedish jazz band Tolvan Big Band performs in Hanoi on 20 and 21 November as part of the European Music Festival 2015.

The group also performed at the festival’s opening night 18 November at the Conservatory of Music in Ho Chi Minh City.

Swedish saxophonist, composer and arranger Helge Albin has led the Tolvan Big Band since 1979. Albin turned this ambitious, up-to-date big band, located in Malmö in southern Sweden, into a musical institution with an international reputation. They have collaborated with notable American musicians such as Dizzy Gillespie, Dave Liebman and Michael Brecker, British composer Mike Westbrook and Danish saxophonist Lars Møller; the band even dedicated one of its programs to new arrangements of the John Lennon songbook. Tolvan Big Band has released 10 CDs over the years.

The European Music Festival 2015 (EMF2015) in its 14th edition offers concerts of unsurpassed diversity and calibre, from November 18 to 29, 2015 in Hanoi and Ho Chi Minh City. The festival is jointly organized by the Delegation of the European Union (EU) to Vietnam, Vietnam Performing Arts Centre – Department of Performing Arts – Ministry of Culture, Sports and Tourism, European cultural centers and Embassies of EU Member States. This event is a highlight among several activities held by the Delegation of the European Union in Vietnam in collaboration with Vietnam’s Ministries throughout 2015 to celebrate the 25th anniversary of the establishment of the EU-Vietnam diplomatic ties.

Ambassador – Head of the Delegation of the European Union Bruno Angelet said “The European Union and Vietnam continue to strengthen linkages and build bridges between the peoples, across the board. Cultural exchanges and public diplomacy activities are an important part of these efforts. Events such as the present European Music Festival showcase the European Union’s strength, its “unity in diversity” and, more generally, the richness and diversity of European culture, contributing to better understanding and reciprocal knowledge, thus reinforcing relations between Europe and Vietnam especially connecting the two peoples.”