On 17 August Fika Swedish Café and Bistro celebrated its 8th birthday, with invited guests and VIPs in attendance, including the Swedish Ambassador couple, Ambassador Håkan Jevrell and his wife Catharina Jevrell.

The owners Tasneem Noor-Smidhagen and Joakim Smidhagen also took the opportunity to launch a new seasonal menu, with the first one being a summer version including sumptuous dishes such as Dillkött, Stekt halibut and Gravlax på knäckebröd.

The new menu was offered for tasting by the birthday guests and Joakim also invited them to give feedback on the menus onwards, welcoming any suggestions, and of course feedback on the dishes. 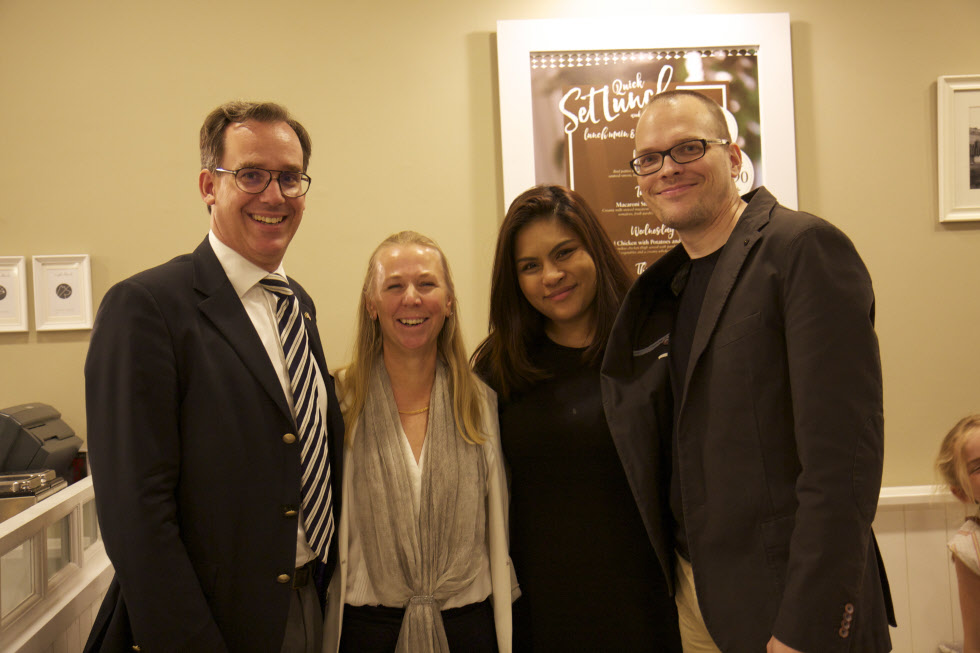 The occasion of course also included a birthday cake that was served, celebrating the three birthdays in one go.

Joakim furthermore made another big announcement that a fourth outlet is about to open in September in the form of a bakery store, to be named Konditori, which will be situated almost opposite the nearby Sultan Mosque on Muscat Street. ”We already have a little bakery inside one of the outlets. Not so long ago, one of our café bakers said that they needed a place on their own in order to be able to supply all three outlets”, the owners previously told ScandAsia.

To open their stand-alone Swedish bakery was the ultimate solution to the space issue. Now, the cafés can be even better supplied with freshly baked goods, and the bakers will have their own place.

Fika is very strict on following own recipes and thus cannot source bread from outside. The owners are determined to keep their business idea of making all food themselves and following Scandinavian standards.

Konditori will also offer the genuine Scandinavian dark rye bread, and aside Swedish bread also European bakery such as French croissants, as well as gluten-free options. Fika Swedish Cafe and Bistro so far have three café outlets in Singapore, and that are 100 per cent Halal.

This means that no alcohol can be preserved on the premises, but Joakim explained to the invited guests that there is huge demand for Halal-certified establishments by the Muslim community and visitors.

They may be a small group of the total population and visitors to Singapore but, informed Joakim, they are big spenders on dining.

There had been too little of Swedish food footprint in Singapore previously, thought the ambassador and said that it was highly appreciative to get to gives suggestions for menu items. Jokingly, he said that one summer menu item was missing, namely Surströmming [the Nordic extremely bad-smelling dish sour herring].

Fika Café first opened in 2008, with the concept of making Swedish food available for everyone.