Usually when 32-year old Michael Johansen travels from Denmark to Thailand it equals family visits and lazy days on the beach. On November 2015 he travelled to Ubon in Northern Thailand for an absolute different purpose than meetings with relatives and swimming in turqouise-blue water. This time, it was to attend a photographer work shop by one of Asis’s most acknowledged photographer and Michael Johansen’s huge inspiration, Manny Librodo from the Philippines.

“As soon as Manny Librodo published a date for a workshop, I took the chance and bought a last minute ticket to Thailand”, Michael says.

Michael literary went a long way for his dream. The Thai-born baker lives in Randers in Denmark, but recently his heart has been beating harder for photography than kneading dough.

“I love to create something. Photography is my flow. I can sit for hours and edit a picture to make it perfect. And I don’t mind to travel far away for a good location for shooting pictures”, Michael tells.

So he did the weekend of 6-9 November 2015. Photographers (both beginners, amateurs and semi-professionals) gathered for a rewarding experience in the name of photography in Ubon. Manny Librodo had teamed up with professional personalities of designer Sam Sethi, make up artist Swanti Suwannee Sethi and four models. Michael, who only had attended workshops of amateur or secondary standard, was amazed. 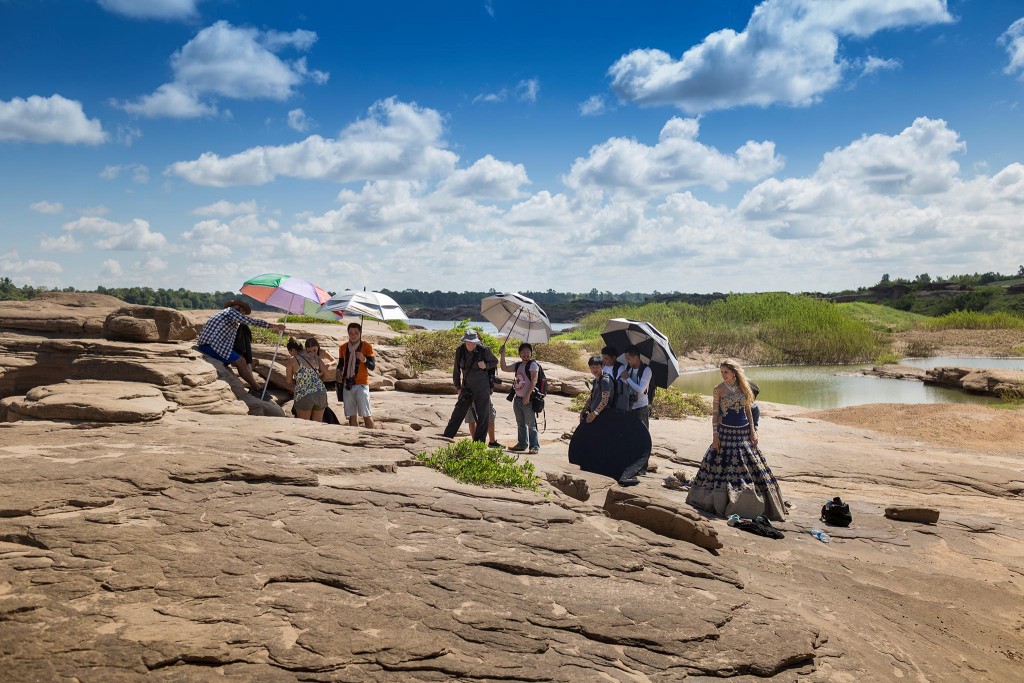 “It was absolutely an unbelievable experience. I actually got to work and meet with top professional people from the photographer profession, shoot beautiful models in the amazing landscape of Ubon, and learn so many new techniques. It was all worth it.”

During the workshop weekend the participants would shoot photos on different locations in the Sam Phan Bok landscape, and after each photoshoot they were having instructive courses how to edit the photos in photoshop by photographer Manny Librodo.

“I don’t think I could get similar lessons in Denmark. I had already researched for a long time for workshops in Denmark, but no workshop caught my interest. Here I had the chance to get tuition from my favorite photographer. I am very happy I took this opportunity.”

The only thing Michael was not happy about, was the fact he had not attend one of these kinds of workshops before.

“At my age you can begin to feel a little under pressure due to what you want to do with your life. I wish I had listened to my heart when I was younger and started doing photography way earlier”, he reveals. A dream in the oven
He studied engineering in Denmark “because there was a lot of money in it”, but he felt bored about this subject and instead educated as a baker. He was born in Thailand, but grow up in Denmark. His family visited Southeast Asia every year, and Michael became very fond of taking holiday pictures. He saved up and replaced his digital camera with a SLR camera. This was coincidentally noticed by a group of photographers while he was taking photos in Bangkok.

“They asked if I would join them for a photoshoot, and after that I was already hooked. They made me realise that this is what I wanted in life. Not engineering, not baking, but taking photos”, he says. “I was worried if it was too late to start a new career..”

But on the photographer workshop in Ubon, Michael Johansen got  confirmation that it’s never too late to start working on your dream.

“Manny Librodo was not only teaching me to capture and edit photos, he also was a personal coach to me on the workshop. He told me he began his career as a photographer in his 40’s. He told me I should not worry about age at all”, Michael smiles.

After this workshop  Michael soon returned to Denmark again, this time with an even eager mind to focus on photography.

“I now know this is what I want. I will begin to establish a photographer career in Denmark, and I hope I can have more chances to attend workshops abroad to get more experience.”

The ultimate goal is to follow Manny Librodo’s footsteps and work both as a photographer and hosting workshops.

“It’s not that Denmark or other places in Europe don’t have beautiful locations, and in the future I would love to organise trips and workshops outside studios and in nature and pass on my knowledge to upcoming photographers who are at the same level as I am now”, he tells.

It’s not sure if Michael also will provide his future students with home baked goods, but one thing is sure: he has found his dream, and he will continue to pursue it until he can make a living of it.

One Comment on “From Randers to Ubon: Michael flew directly to Thailand for a photo workshop”