The Danish Ambassador to Thailand, Cambodia and Myanmar Mr Mikael H. Winther attended the groundbreaking ceremony of Carlsberg’s new brewery in Myanmar – the first ever international brewery in the country – on 23 October 2013. 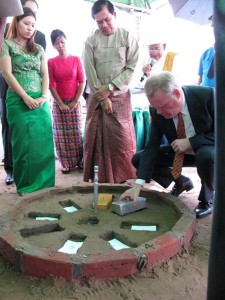 Danish traditions were followed in Bago, Myanmar (2 hours north of Yangon) as Carlsberg held the groundbreaking ceremony of its new brewery planned to start production in the second quarter of 2014. The brewery is a joint venture between Carlsberg and the local Myanmar company Golden Star with Carlsberg owning 51%.

Besides local dignitaries, Danish Ambassador Mr Mikael H. Winther attended and held a speech praising Carlsberg’s decision to invest in Myanmar and promoting Denmark all around the world. The Ambassador praised the local Myanmar authorities for their smooth collaborative efforts and urged them to continue on this path to growth and prosperity for the country.

Carlsberg will be the first ever international brewery in Myanmar, and has high hopes for growth as the population in Myanmar currently has one of the lowest rates of consumption

Source: Embassy of Denmark in Bangkok