On 26 September the very first JYSK store in Singapore (occupying 9,000 sq.ft. at the new Courts Bukit Timah store) opened its doors, with plans to open another 20 in the country within the next five years! JYSK, is an international retail chain from Denmark (with more than 2,200 stores across the world) that sells home necessities within the sleeping and living categories.

JYSK in Singapore is operated through a franchise deal between JYSK and the furniture and electrical goods retailer Courts. Offering JYSK products means that Courts can expand its offers to its customers within interior design from now on.

Singapore became JYSK’s 39th country to open a store in where the first outlet stocks about 1000 furniture and home wares items, designed in the popular minimalist Scandinavian style.

Despite being Denmark’s largest international retailer, its Asian presence had been limited to China and Indonesia, where it trades under the JYSK Nordic brand.

The Nordic brand is excited to be working with Courts.

»Courts has 40 years of experience in Singapore and is already a very well-known brand in the country. JYSK can contribute with great offers and Scandinavian products, which are in high demand in Asia. There is no doubt that JYSK and Courts are a good match,« says Frederik Kroun, Franchise Director in JYSK.

Courts executives first saw the home wares brand while in Indonesia scouting for locations for Courts stores and approached the brand’s head office to discuss a partnership in Singapore.

“We wanted to expand our portfolio by adding other brands into the mix, which would give consumers access to a more diverse and comprehensive range.”

JYSK’s range is considered a massmarket offer, like Ikea, with a strong value proposition. JYSK stores in stores will be opened across the Courts Singapore network progressively over the next five years. 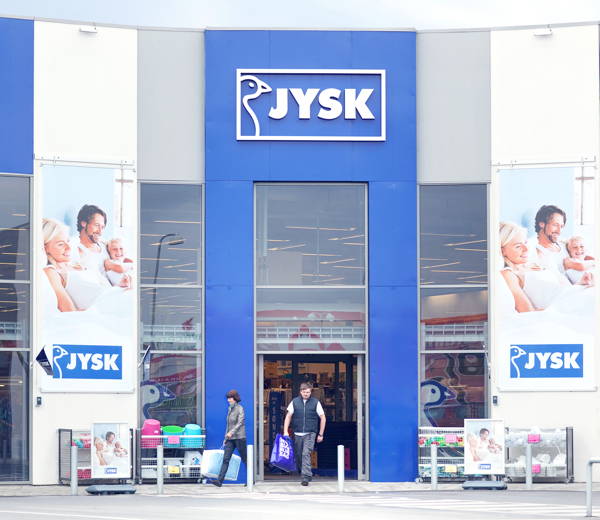 Group CEO of Courts Asia, Mr Terry O’Connor, commented: “Homeowners’ tastes and needs are constantly evolving. Due to globalisation, there is now greater accessibility and therefore appreciation for global brands and their offerings. Joining hands with Ace Hardware and also with JYSK has allowed us to provide a more comprehensive suite of home solutions offerings to our customers and reach out to new customers, from DIY project enthusiasts to purveyors of design.”

“In Singapore, where the cost of operations is high for a retailer, it is essential to find ways to innovate our offerings and improve overall productivity for our store bases,” he continued.

Mr Jonas Schrøder, Communications Director, from JYSK, said: “Having a 40-year legacy in Singapore means that Courts has the industry know-how, network and rigor to shape the industry together with us. We are confident that combining our strengths with Singapore’s largest retailer will allow us to expand our business further while delivering a great Scandinavian offer for everyone within sleeping and living to customers.”

JYSK Group has its origins in Scandinavia: the first store opened in Denmark in 1979. JYSK Group aims to establish a presence throughout the world, providing great offers to everyone.