The newly-posted Danish Ambassador to China, A. Carsten Damsgaard, on 19 August 2015, presented the Letter of Credence by which Her Majesty Queen Margrethe II of Denmark nominates him as Ambassador of Denmark to China, to the Chinese President, His Excellency Mr. Xi Jinping.

President Xi Jinping warmly welcomed the Ambassador to China, at the Great Hall of the People in Beijing, asking him to convey his sincere greetings and good wishes to Her Majesty The Queen of Denmark. The President added that China wishes to continue to strengthen the strong cooperation and close bilateral relations with Denmark. In reply, the Ambassador, by command of The Queen, conveyed Her Majesty’s best wishes to the President and the Chinese people as well as expressed Her Majesty’s fond memories of a very successful State Visit to China last year. He added that he would work hard in his new post to contribute to a further development of the comprehensive strategic partnership between Denmark and China.

Ambassador Damsgaard is the 23rd Danish Ambassador to China since Denmark set up its first diplomatic mission in the country in 1908.

“I am deeply honoured to be nominated as Ambassador of Denmark to China. I look forward to meet the Chinese people and to learn more about Chinese culture – and to further develop the historically close cooperation between our two countries,” said Ambassador Damsgaard. 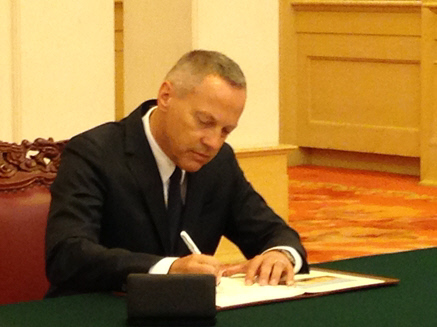 “China is today one of Denmark’s most important economic partners. However, our close bilateral relationship goes far beyond trade. Based on the Strategic Partnership the two countries are engaged in close cooperation on several issues, including, but not limited to, environment, energy, food safety, health, shipping, poverty alleviation, anti-corruption, education, culture, and people-to-people contacts.”

Ambassador Damsgaard is a distinguished career diplomat in the Danish Foreign Service and has previously served as Danish Ambassador to Japan (2011-2015), Afghanistan (2010-2011), and Israel (2003-2008). He has also been Political Director at the Ministry of Foreign Affairs in Copenhagen. 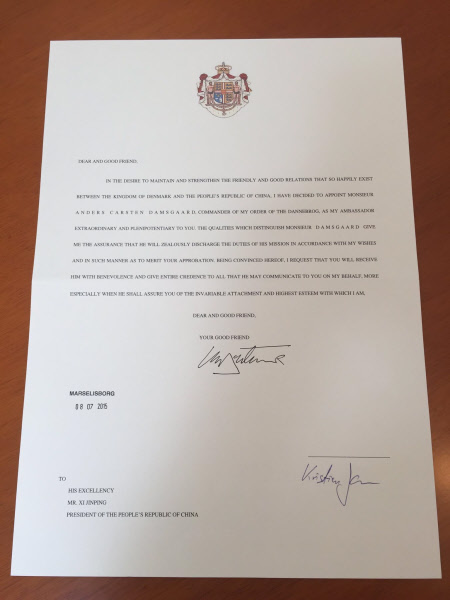