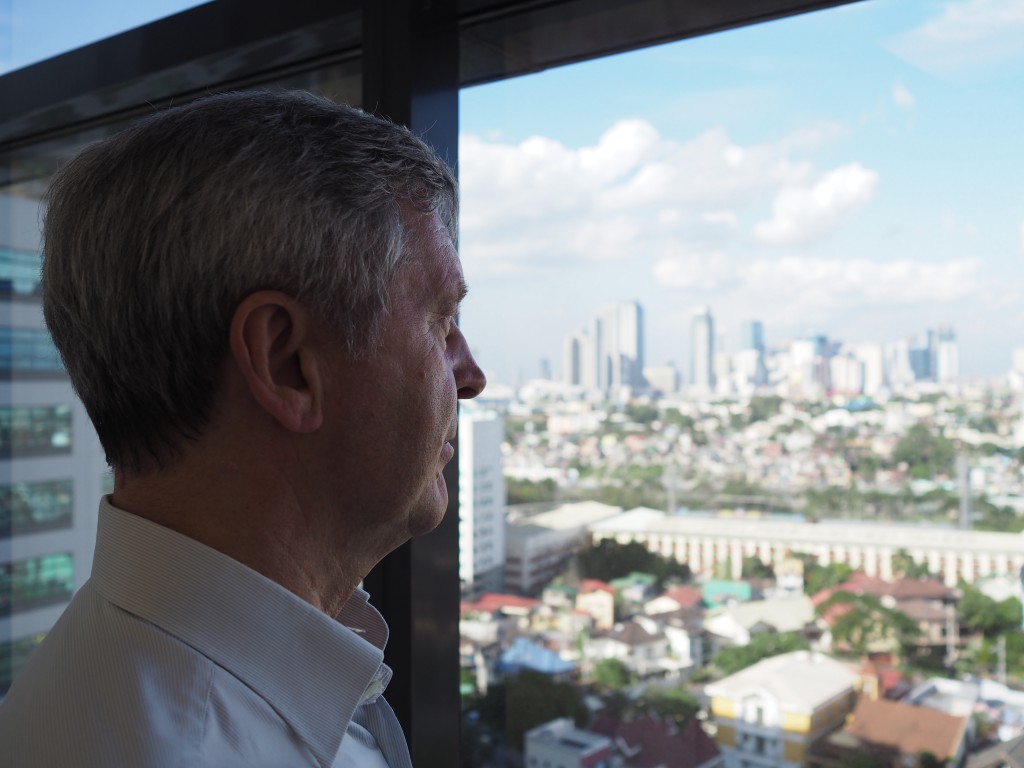 The new Danish Ambassador to the Philippines has exchanged armored vehicles and amplified prayers from minarets as the Ambassador to Lebanon, with an eclectic view of Manila slum and skyscrapers. 25 years ago Jan top Christensen ran a UN refugee camp in the Philippines, but now he is back for business.

At the top floor of a newly constructed office building, at the new Danish Embassy, Ambassador Jan Top Christensen can follow high-rises shooting towards the sky, as competing with the latest economic growth in the Philippines. In 2002 Denmark closed its Embassy in Manila. Now 13 years later, in a time where the Philippines is the fastest growing economy in Southeast Asia, the Embassy has re-opened.

Jan Top Christensen is no stranger to the Philippines. In 1987-1990 he was leading a UN camp for Vietnamese refugees. In an exclusive interview with ScandAsia, he said that he feels at home in the Philippines.

Denmark has opened an Embassy with a heavy focus on investments and exports. Even though the Philippines have high poverty rates, it is a middle income country and Danish development policy is not aimed at wealth distribution. While Jan Top Christensen won’t hesitate to recommend the Philippine government to fight inequality, he knows it is a long fight and that his voice will just be one in a larger choir. A much more outspoken goal of his is doubling the exports in Philippines during his time as ambassador.

“Our success depends on our own energy and professional handling of economic diplomacy, with all the instruments we have in that connection, we already started in November, in Denmark, where I mobilized interest in the Philippines at an seminar with Danish Industry. That is probably the reason we see a, for many, surprisingly big trade delegation visiting now,” Jan Top says.

And judging statistics presented by the ambassador himself, the numbers already look impressive, in 2013 Danish exports to the Philippines were approximately worth DKK 1 billion, and in the first nine months of 2014 the exports increased by 155 percent.

Sick Man or Shining Star
A taxi drive through Manila gives a good image of the contradictions of the fast growing Philippines. The low paid taxi driver will most likely be able to speak English at a level that enables him to have political discussions, or at least complain about corruption. While new buildings are being constructed everywhere, the different districts in Manila are poorly connected, the roads are overloaded and even the short trips can be prolonged with hours of waiting during rush hour.

Jan Top Christensen refers to the Philippines as “The Bright Shining Star of Asia”, despite its previous reputation as “Asia’s Sick Man”, troubled by corruption, terror and natural disasters. On the day of his ScandAsia interview, Jan Top Christensen was presented with a daily newspaper with articles covering the corruption allegations towards the vice-president, a bombed transmission tower, active communist rebels and HSBC predicting lower growth rates because of the 2016 presidential turnover, but despite the concerning news content he was confident that the growth in Philippines has a strong foundation, referring to recent reports from IMF and the World Bank.

“The growth rate might go a bit up and down, but the economic growth is robust and the rates will continue to be high according to all serious international observers. It is due to the same factors you had in the 60’s, when the Philippines where called ‘The Bright Shining Star of Asia’. This is a country with significant natural resources, not only when it comes to agriculture, but also minerals, oil and natural gas. Secondly you have a population that is relatively well educated and has English as a second national language,” Jan Top Christensen says and adds that we can expect a 6 to7 percent growth rate in the coming years.

The Philippines offers opportunities in every sector
At the recently designed and newly constructed Danish Embassy everything from the grey carpets to wooden coat-hangers are imported from Denmark. The designer lamps are Danish and so are the adjustable desks. The Embassy in itself could basically function as a showroom in Danish design and innovation, and according to Jan Top Christensen there is not any limits to what type of Danish companies could have success in the Philippines.

”Here are opportunities for a broad range of sectors, so to only focus on a few, having  strategic sector choices, would be to miss opportunities elsewhere,” he says.

According to Danish Minister of Trade and Development Mogens Jensen, around 100 Danish companies are already present in the Philippines; the biggest is Danish shipping giant Maersk but also smaller companies as Sonion that makes acoustics devices and Lindberg that produces designer glasses, are both present with factories in the country.

The recent opening of the Danish Embassy was attended by a large trade delegation with 18 Danish companies keen on learning more about the Philippine market. The delegation had a seminar with their Filipino counterparts. On this occasion you got a hint of what types of companies are interested in exploring opportunities in the Philippines. The seminar was split into three parts that focused on three different sectors; food and agriculture, healthcare and pharma and last but not least, sustainability regarding water, energy and environment. To Jan Top Christensen this seminar is an example of why it is important to be present with an embassy.

”One thing we can do as an Embassy that no one else is capable of, is creating direct access to high level officials. It is possible that someone would be able to offer a few of the same tools as us, but often Danish companies will be interested in getting a package solution in order to get started out here. Because of our access to public authorities, we are able to put together visit programs that could be interesting for Danish companies,” Jan Top Christensen says.

Not just a fairy tale
Even though Jan Top Christensen is confident that the growth has a strong foundation, he does not hesitate to mention that there are serious problems in the Philippines, both regarding business and from a humanitarian perspective.

Some problems can be seen from the windows of the embassy, the slow moving traffic is just one aspect of an overall inadequate infrastructure while scruffy shacks next to shining skyscrapers are reminders that the growth has not been inclusive. Less visible, the country still struggles with corruption even though they have made impressive progress on Transparency International’s corruption index. The energy prices are high, protection of intellectual copyrights is low and restrictions on foreign businesses are slowing down investments.

The Danish Embassy opened on the 22nd of January 2015. The week after Pope Francis’ visited the Philippines and encouraged to fight poverty and inequality. Having experiences with humanitarian work in the Philippines and in the Danish Foreign Ministry, Jan Top Christensen too is concerned about what might not be the biggest challenge for the economy, but still something he has described as an unethically large inequality.

”Fundamentally I consider myself a moral human, and I do not believe than people should live in poverty. All people should live in dignity. When you can’t afford to send your children to school or give them proper food you get desperate – a life in poverty is without dignity,” Jan Top Christensen says and adds that at least there are good indications that the development is moving in the right direction.

“Inequality, poverty and corruption have to be fought. I have no illusion that the problem here will be solved in my five years, but my voice among others can help supporting the positive and constructive forces in the country.”