The quota of almost 6,000 Thai berry pickers employed to work in Sweden and Finland this harvesting season has been filled, according to Thailand’s Ministry of Labour. The Nordic countries issued significantly fewer visas for seasonal workers from Thailand this year. 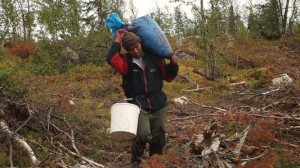 Sumet Sumetho, director general of the Employment Department, said all 5,924 workers had been granted visas and travelled to the Nordic countries under the official quota arranged by the ministry.

“No additional workers will be recruited to work as berry-pickers in Sweden and Finland for the current harvesting season,” he said.

Sweden granted a total of 3,325 visas for seasonal workers from Thailand, or only half of 2013. Finland granted 2,599 visas for Thai berry-pickers, down by 616 compared to that of the previous year.

Each of the Thai berry-pickers paid THB75,000 to cover expenses related to passport and visa applications and health insurance. They are promised the equivalence of about THB91,000 per month provided that they meet the agreed minimum quantities of berries.

But while there, the Thai berry-pickers are required to pay for food, lodging and transport. The typical berry picking season lasts 75 days from July to September.