Finland and Hong Kong have signed a tax treaty on 24 May. When in force, it further highlights Finland’s position as a secure and predictable destination for Hong Kong investors. The new agreement will contribute to a continued fruitful economic cooperation between individuals and companies in both Finland and Hong Kong. An investment protection agreement has been in force between Hong Kong and Finland already since 2014, writes Consulate General of Finland in Hong Kong and Macao.

The new treaty is a comprehensive avoidance of double taxation agreement (CDTA). This CDTA sets out the allocation of taxing rights between the two jurisdictions and will help investors better assess their potential tax liabilities from cross-border economic activities.

“This is the 40th CDTA that Hong Kong has signed with its trading partners. Hong Kong has all along treasured the economic and trade ties with Finland, and I have every confidence that the signing of the CDTA will bring our bilateral relations to a new level,” said the Secretary for Financial Services and the Treasury, Mr James Lau, on behalf of the Government of the Hong Kong Special Administrative Region. 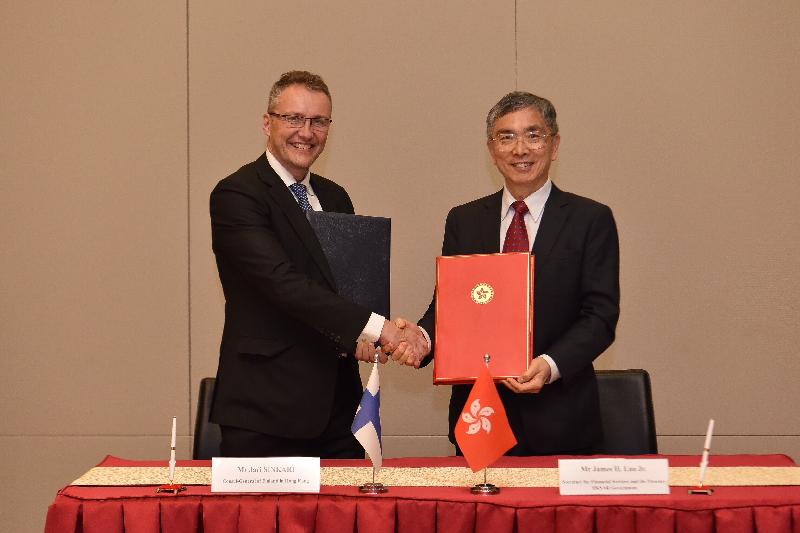 Moreover, the agreement provides the following tax relief arrangements:
(a) Finland’s withholding tax rates for Hong Kong residents on dividends and royalties (currently at 20 per cent for companies and 30 per cent for individuals) will be capped at 5 per cent/10 per cent on dividends (depending on the percentage of shareholdings) and 3 per cent on royalties;
(b) Hong Kong airlines operating flights to Finland will be taxed at Hong Kong’s corporation tax rate, and will not be taxed in Finland; and
(c) Profits from international shipping transport earned by Hong Kong residents arising in Finland will be exempt from tax in Finland.
The Hong Kong-Finland CDTA has also incorporated an article on exchange of information, which enables Hong Kong to fulfil its international obligations on enhancing tax transparency and combating tax evasion.

The CDTA will come into force after the completion of ratification procedures by both sides.

Source: Consulate General of finland in Hong Kong and Macao