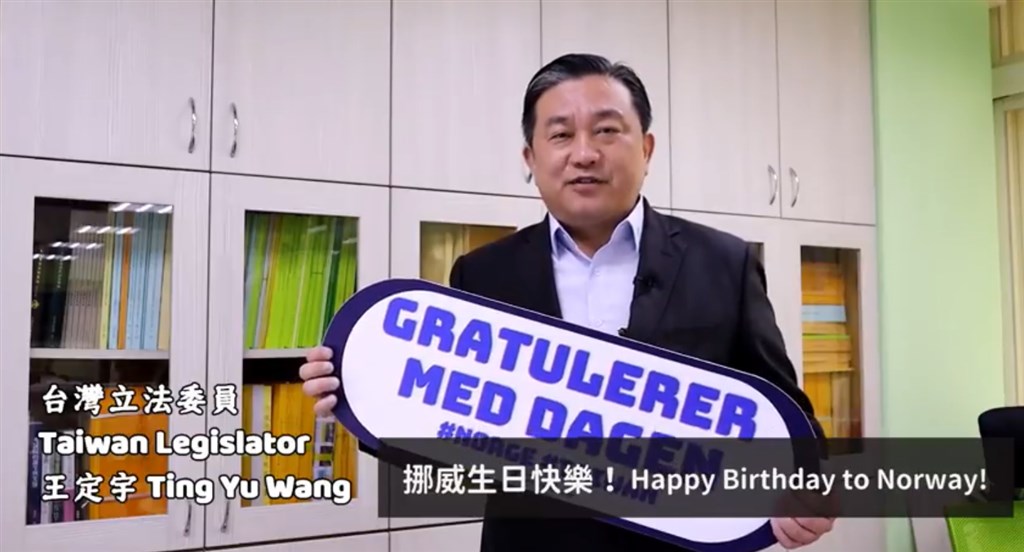 Thirty-three Taiwanese legislators congratulated Norway on its National Day on Monday via video messages, though a local parade for the event scheduled for that day was cancelled because of a recent surge in COVID-19 cases in Taiwan.

The one-minute video was recorded and compiled by the Taiwan Digital Diplomacy Association (TDDA) two days ago to promote the friendship between the Taiwanese and Norwegian people, the group said in a press statement.

“While cross-border interactions have been halted due to the COVID-19 pandemic, public diplomacy should not stop,” TDDA Chairwoman Kuo Chia-yo (郭家佑) was quoted as saying in the statement.

“We should continue to promote exchanges between Taiwan and other countries, utilizing the internet and social media,”

In the video, Taiwanese legislators were seen sending their greetings to Norway in English.

Aside from the legislators, who were mostly from the ruling Democratic Progressive Party, Taiwanese scholars, students and representatives from the business sector also greeted Norway for the occasion in Norwegian.

The video was posted on Norway Reddit, a subreddit dedicated to issues relating to Norway, and received more than 1,000 upvotes as of 8 p.m. in the evening.

According to CNA Focus Taiwan‘s report, Oslo cut its official ties with Taipei in January 1950. Neither government has a liaison office on the other’s soil after Oslo closed its trade office in Taipei in 2004 and Taipei closed its representative office in Norway in 2017.

According to Norwegian engineer Clas Sivertsen, however, who has been living in Taiwan for more than five years, people-to-people exchanges between the two sides have been warming in recent years.

He cited the Norwegian National Day parade and flag-raising ceremony participated in by more than a dozen Norwegian expatriates and about 60 TDDA members in Taipei last year as examples, according to the statement.

Similar activities are not possible this year due to the recent rise in COVID-19 cases in Taiwan, which prompted the government to ban gatherings of more than five people indoors and 10 people outdoors for any event.

Sivertsen believed that Norway and Taiwan have a lot of room for cooperation, especially in the field of engineering.

“Taiwan has excellent supply chains for manufacturing industry. You can make many industrial instruments of your own design in a short time. Taiwan is a good place for engineers,” he said.