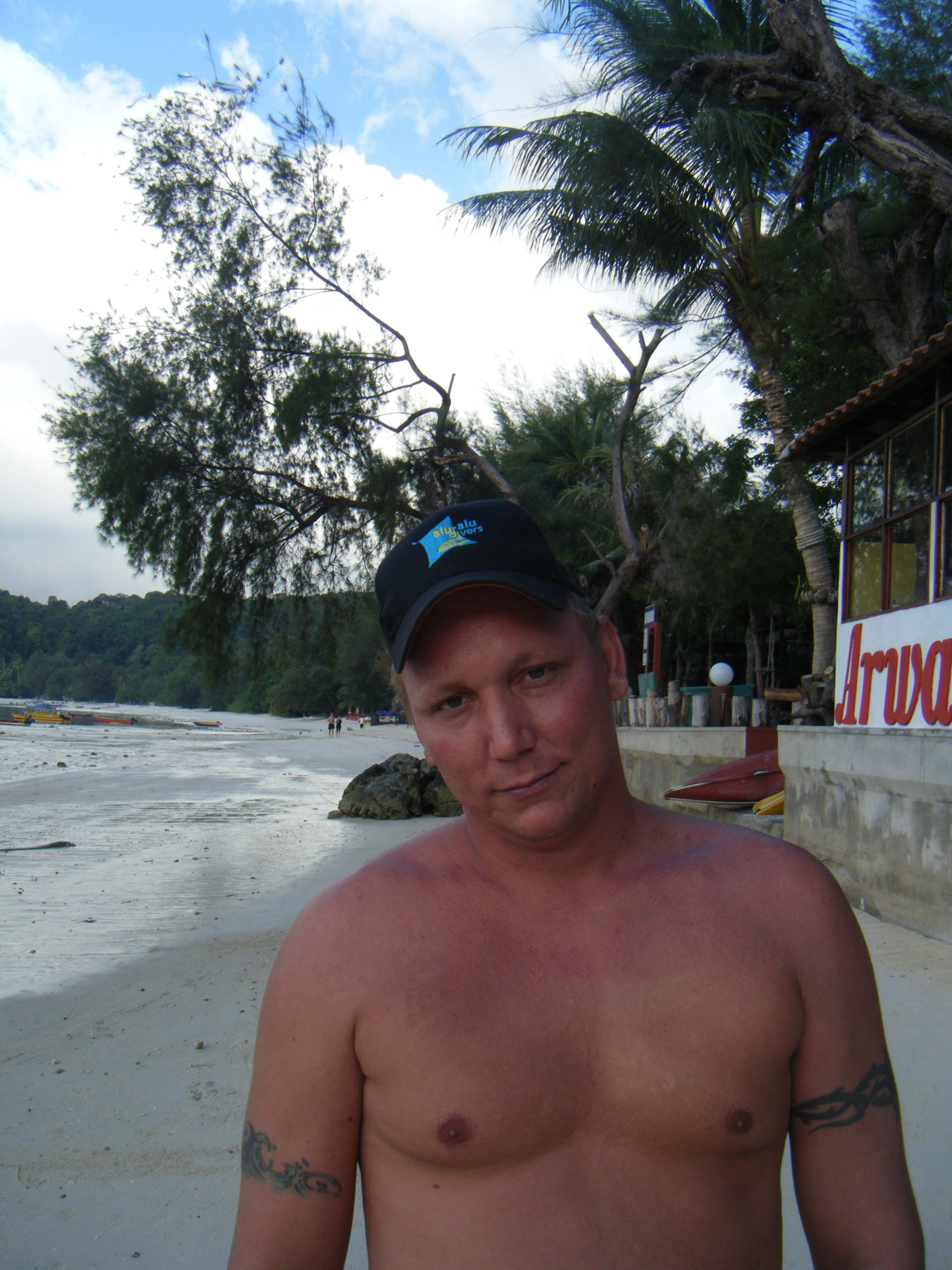 32 year old Johan Bratt has set up a life for himself at the tropical island of Perhentian. With immense experience and a high level of education, he runs the dive shop at Alu-Alu Divers and Bayu Lodge, and after three years, the island off the Malaysian East coast has become a part of him.

Even from a distance, Pulau Perhentian looks as if it has been picked straight out of Pirates of the Caribbean. Perhaps that is why, at first glance, Johan Bratt has that kind of pirate air around him. He looks like someone who has travelled the seven seas more than once and the scars on his legs add to the illusion. As do the tattoos on his back, and the limp to his walk completes the picture.

That is, until he starts to speak. Then the illusion of being stranded on a desert island with a Jack Sparrow-like character vanishes into thin air and is replaced by the spirit of someone with an extremely adventurous personality, who, as it turns out, got his scars and the limp from riding down a Thai mountain side on his bike way too fast.

Behind the somewhat rough appearance is a man with friendly eyes and a real talent as well as genuine passion for what he does. With a laugh that comes easy and a soft spot for his business, Johan is truly in his right element at Pulau Perhentian in the middle of the South Chinese Sea.

It is the combination of that and the beautiful surroundings that makes a visit to Alu-Alu that much more memorable.

“I started doing a bit of work at the local marina to earn some extra money,” he says, but the diving soon took on a life of its own, and Johan’s interest in the underwater world kept growing.

He completed the base of his diving education in Sweden, and at 22 he left with a desire to explore the world. That decision led him to some very remote corners of the planet, and it brought him into situations he never imagined before finally putting him at ease.

During his first adventure abroad, Johan lived in the Philippines for six months. When his time there was up, he found that Sweden had become much too small for him, and in 2003, he got a job in the island of Phi Phi in the South of Thailand.

Tsunami
Johan stayed in Phi Phi for four years, and he was there when the tsunami in December 2004 hit.

“I woke up that day to the sound of people screaming,” he recalls, grateful and fortunate enough that his own house was so high up that the wave had missed it.

As he tells the story of the horrors he experienced that day, chills and vivid pictures fill the air:

Lifeless women lying in the streets with their lungs filled with water.

Young girls baking on the beach and slowly dying because their backs have broken from slamming into trees.

The overwhelming smell of rotting corpses the next day.

Those were the real life images Johan battled with for months after the tsunami. It took a long time for him to recover from the experience but in the end, his love for diving got the better of him and he returned to Phi Phi.

Malaysia
Johan stayed on the island for another couple of seasons but in 2007, he booked a one way ticket to Long Beach; a backpacker paradise in the Malaysian tropical island Perhentian. He had heard a lot of positive things about the place, but when he arrived, it did not live up to his expectations.

His disappointment led him on a walk around the island, and that is how he ended up at Alu-Alu, which is the Malay word for “barracudas”.

“I have travelled a lot,” Johan explains, “but when I came to Malaysia, for the first time ever I thought ‘yeah, I can see myself living here’.”

He got a job at the Alu-Alu dive shop and a couple of weeks later, he met his new boss; Ari from Malaysia.

Ari owned the resort with her sister, and when she returned to the island from a trip to Kuala Lumpur, Johan was quite nervous about the encounter.

“I was the new guy and I had just planned a party for 400 people here at the beach. She didn’t know about it,” he says and laughs at the thought of how badly things could have turned out.

Luckily, Ari did not mind and the Swede and the Malay started a friendship, which later turned into a relationship. Today, that relationship is also a partnership as Ari is in charge of the resort, while Johan runs the dive operation.

He loves his job, and being just one of two with his level of diving education in all of Malaysia, he knows what he is doing. Johan got his training from Scuba Schools International (SSI), but the dive shop does both padi and scuba courses.

Running a dive shop – Swedish style
As an experienced diver, Johan is the ideal person to manage a business that requires high levels of safety and professionalism. He has been diving for 13 years and he is very aware of the responsibility that lies on his shoulders when he takes people out for a dive:

“It is important that we do things slow from the start and take inexperienced divers through all the steps before we take them diving,” he says and adds that he really believes that is the best way to go.

“I know of a lot of other dive shops that rush through everything and don’t even cover the basics. The customer often doesn’t get a very good experience and it can be quite dangerous to do things that way, too. In the end, I am the one who needs to make sure that my guests are safe and leave with a positive experience. They are my responsibility.”

His ambition is to run a place where people feel safe and comfortable – both at the resort as well as diving wise. This approach has resulted in service, safety, and professionalism levels that are the same as they would be in any of the Scandinavian countries. On top of that, he and Ari have taken as many measures as possible to make the resort self-sufficient and environmentally friendly. You can even drink the tap water! The next modification is to install solar panels to achieve total independence from other sources of energy.

Scandinavian discount
As a Swede in South East Asia, Johan encourages other Scandinavian expats to visit him at Alu-Alu. The staff and diving instructors are multilingual and speak a variety of Nordic languages as well as English. All nationalities are welcome but for the remaining part of this year as well as 2011, he is running an exclusive promotion for members of the South East Asian Scandinavian Societies.

“In March-April-May and September-October, we offer a 20 percent discount to the Scandinavian Society members.”

The promotion covers everything: Snorkelling, kayaking, island hopping, and even the yoga classes that will be starting soon.

Mostly for divers – and everyone else
Although the initial impression of the happy Swede at Alu-Alu was a bit off, Johan does have stories that are worthy of any pirate. He will happily tell you about the time he went swimming with hammer head sharks and manta rays, and about the guy who scratched his car at the IKEA car park. He has a ton of stories to share and whatever he has not experienced is probably not even worth mentioning.

The resort was initially built around the dive shop, which makes it the perfect place for divers who are looking for a safe and unique experience underwater. Because of his own passion for diving, Johan will do anything in his power to give people a chance to know the world he himself is so fascinated of.

For everyone else, however, there are many other ways to entertain one self for a couple of days. In fact, Johan and his stories are more than enough make a trip to Alu-Alu at Perhentian worthwhile and a great experience. 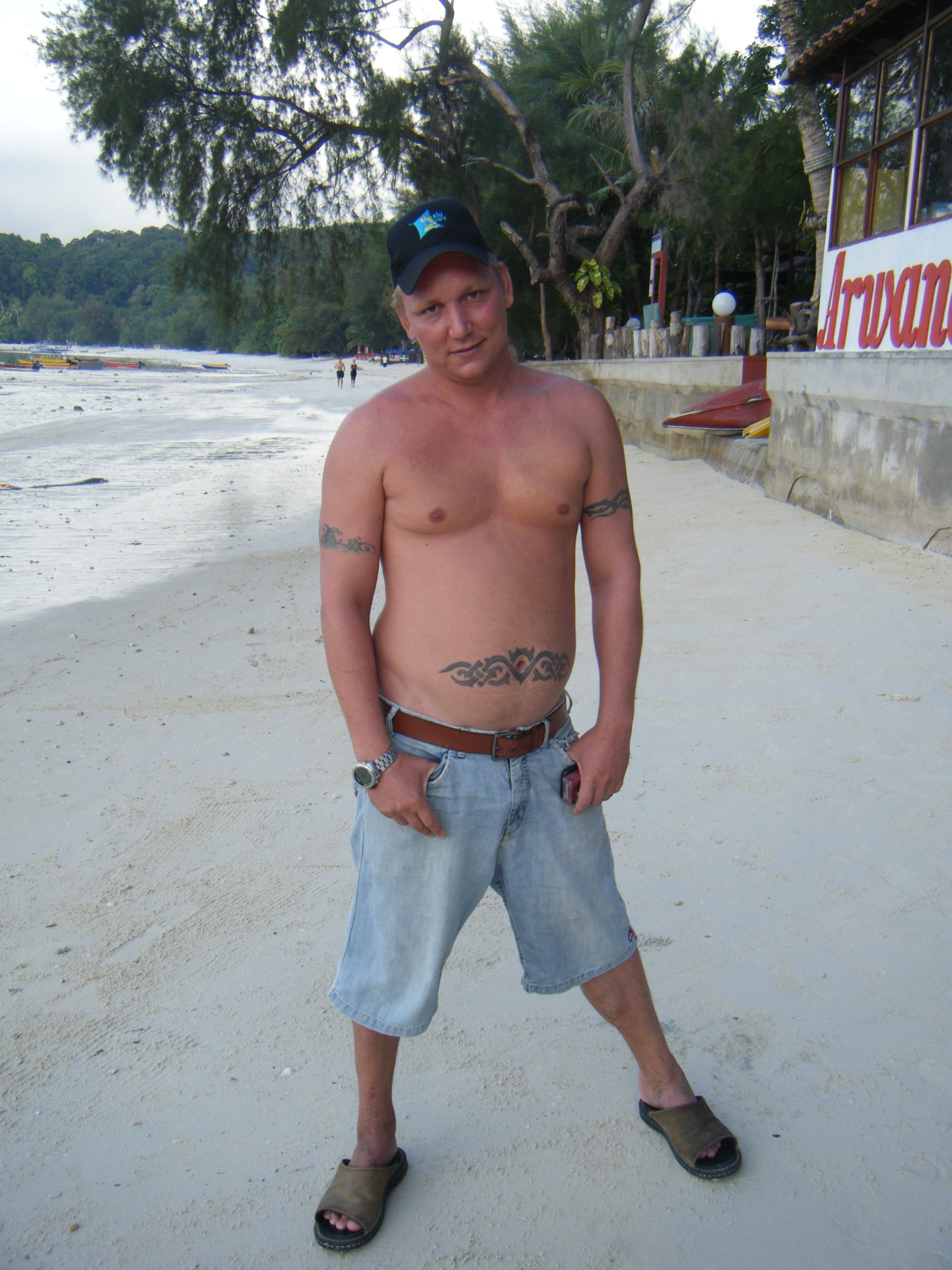 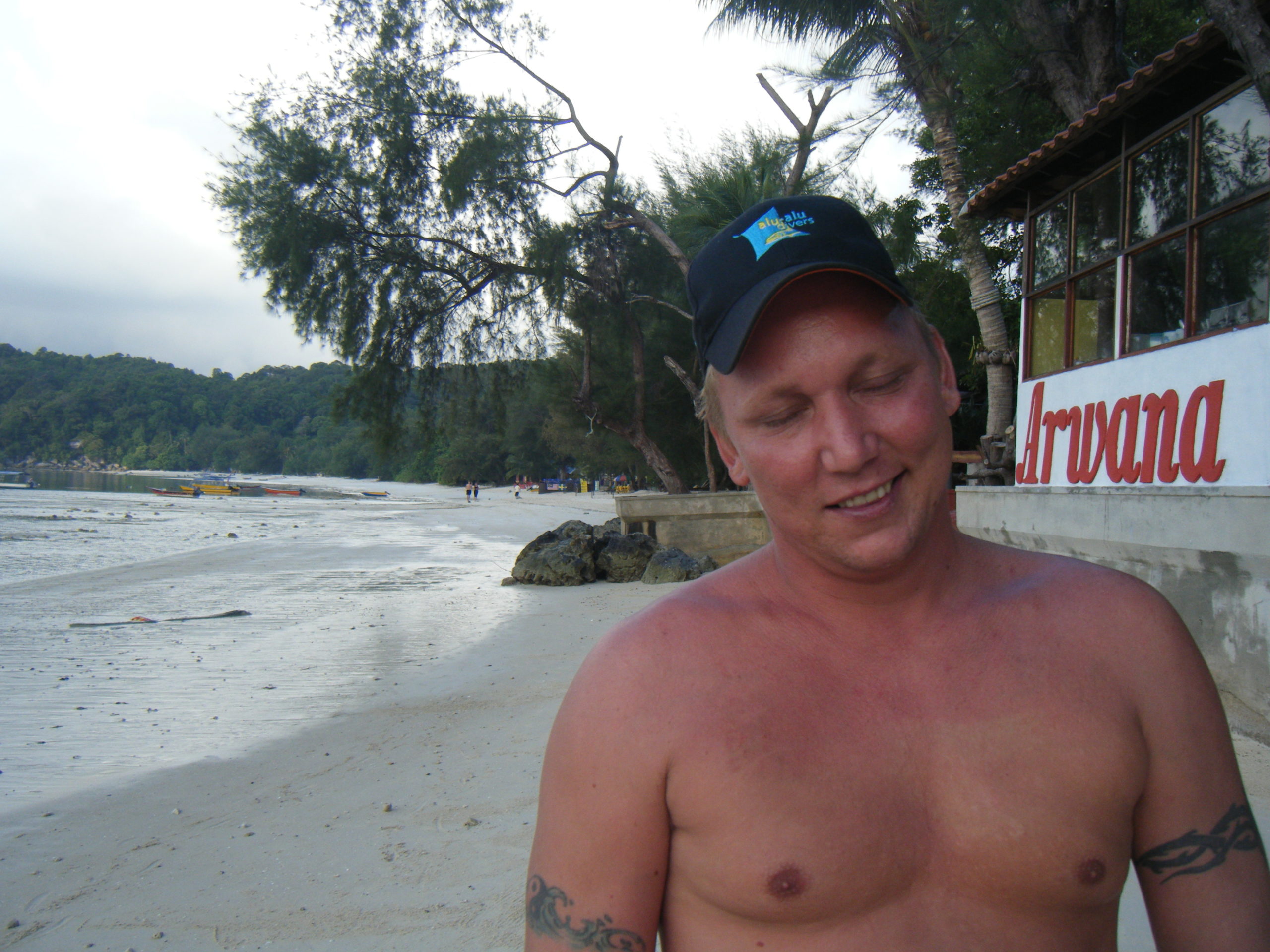 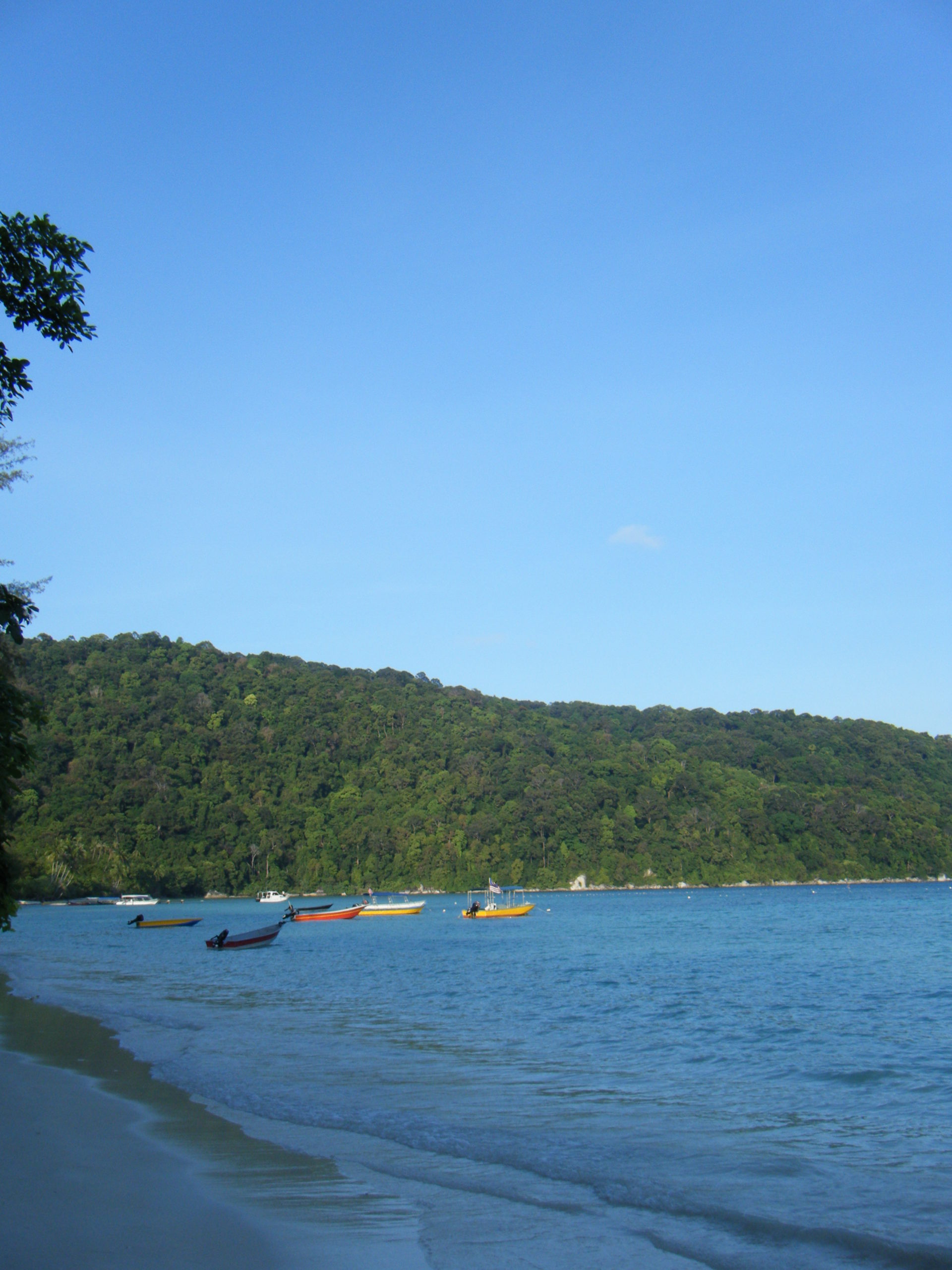 3 Comments on “A Swedish Piece of Paradise”