“The Seducer’s Diary,” a famous philosophical work adapted to stage, is set in a decadent 1930s Shanghai cabaret and explores choices between hedonism and ethics, self-indulgence and responsibility. 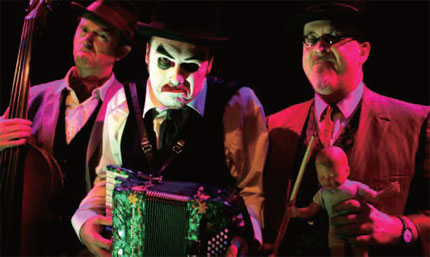 The play in English, with Chinese subtitles, will be staged by the No Domain Theatre from Denmark, with music by The Tiger Lillies, an award-winning British punk band.

It will be staged from February 21 to March 3 at Shanghai Drama Arts Center. The cast includes four Chinese actors.

The performance in the form of cabaret features music, comedy, song, dance, recitation and drama. The colorful characters include bartender, pimp, prostitute and hatchet man.

“The Seducer’s Diary” is the most influential part of Danish existentialist Soren Kirkegaard’s “Either/Or” (1843), a sprawling work in many voices that explores deliberate choices between “aesthetics,” in this case meaning personal and hedonistic, and ethics.

In the “golden” 1930s, Shanghai was not only the “Paris of the East,” but a place of decadence and temptation, often the destination of sailors who were abducted or “Shanghaied.” Along with Paris and Berlin, Shanghai was notorious as a “sin city.” Its cabarets were infamous.

In the story and play, Johannes slowly plots the seduction of Cordelia and takes great pleasure in the planning, not even speaking to his target for a long time. He finally makes his move and they are soon engaged, but Johannes is dissatisfied and drives Cordelia to break off the engagement. He then lures her back and leaves her. He moves on to plotting his next seduction.

Kierkegaard himself wrote of being deeply and mutually in love, getting engaged and then breaking off the engagement.

Speaking of the Shanghai cabaret setting, No Domain Theatre director Anders Nyborg says, “Sometimes it just helps to put a scene into an environment that puts the whole thing in a higher necessity” and makes it vivid and urgent.

“Shanghai in the 1930s is the perfect setting for human beings having to make moral choices,” says producer Chen Lei.

“In the English and Danish languages, people can even talk about being ‘Shanghaied’ – to be tempted into something they perhaps shouldn’t have said ‘yes’ and now cannot really get out of,” Chen says.

“Much of what Kierkegaard wrote relates to questions we can ask ourselves today,” Nyborg says. “The ethical and moral values are always present for us in our search for the ‘good life.’ But there’s also a lot from Kierkegaard that we cannot relate to in our times. We don’t bother about that in our show.”

Kierkegaard (1813-1955) and Nietzsche are considered the fathers of existentialism.

The cabaret theater form, which creates atmosphere and generates emotion through music, is a good way to express the difficult Danish philosopher.

“All those words are the main reason that many people, myself included, don’t bother to read him from start to finish, but just skim through some writings and enjoy other bits in detail,” Nyborg says. “The Seducer’s Diary” is singled out by many readers because it’s interesting and vividly illustrates many key concepts.

“Traditional word theater would be a hard one for me to deal with Kierkegaard in,” the director says.

The award-winning British cult band The Tiger Lillies, founded in 1989, has been recognized for the cult hit musical “Shockheaded Peter” and the album “The Gorey End.”

Performing in English, their second language, puts pressure on the Chinese actors, “but the Shanghai Drama Arts Center has cooperated many times with international troupes, so we are very confidence about the performance,” says producer Chen.