Their most popular song has up to date nearly 410 milion views on YouTube. What Danish pop act could be behind such an achievement than the dance pop act AQUA!

And we are of course referring to ‘Barbie Girl’, released in May 1997 as their third single overall, and the first United Kingdom release.

Fans of the Barbie Girls legends in Singapore and its surroundings now have a chance to re-unit with the band as they have included the Southeast Asian metropolitan on their tour for a once-in-a-jifetime 20th Anniversary Concert! 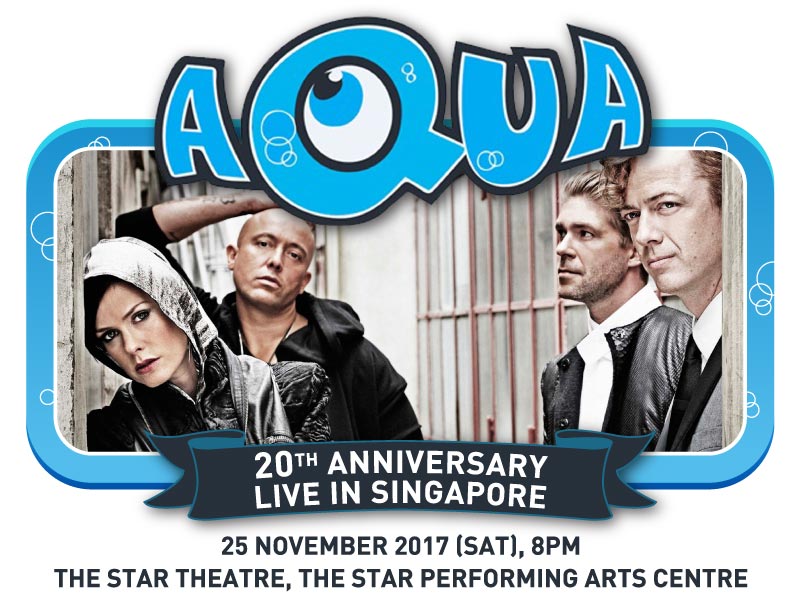 Among their huge party hits are also: ‘Doctor Jones’, ‘Roses Are Red’, ‘My Oh My’, ‘Lollipop (Candyman)’, ‘Around The World’ and ‘Cartoon Heroes’.

On 25 November, Aqua makes a rare appearance on Singapore shores.

“The Aqua party experience promises to be a feel-good show like no other! Be ready for heart-stomping, back-to-back greatest hits concert that will be backed by a full live band direct from Denmark!”

Aqua is the Best Selling Dance Group from Europe ever! They have sold in excess of 33 million albums and singles, notching up 3 #1 Hits on the UK Chart and over a dozen chart-toppers in Europe. They also famously conquered Asia as well as the US Billboard Charts with their signature brand of playful pop and wacky lyrics. The Danes’ 1997 album ‘Aquarium’ is considered an iconic pop-dance album till this day.

The enduring #1 hit ‘Barbie Girl’ was a world-wide phenomenon that inspired a generation of Cosplay dress-ups and is a staple in retro music nights worldwide.

“Since splitting up in 2001 the band has only toured for special occasions – and this 20th Anniversary of “Barbie Girl” is a highly anticipated unique event! Main members: lead female vocalist Lene Nystrøm, male vocalist-rapper René Dif and keyboard-guitarist Søren Rasted will be presenting this energy-fuelled concert with their ‘live’ band entourage.“