On 20 April the Embassy of Sweden in Bangkok hosted a meet and greet with KTH, The Royal Institute of Technology and its KTH Bangkok alumni where about twenty new and alumni students attended. Ambassador Klas Molin presided over the event and Professor Anders Hult and Coordinator Margareta Svedberg from KTH attended.
This networking event allowed fellow alumni students to reconnect with each other and with KTH staff. 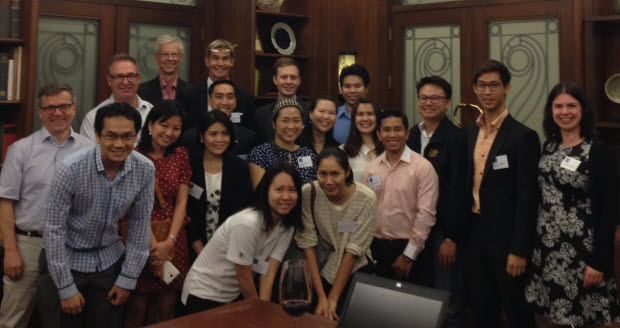 Moreover, the students going to Stockholm in time for the autumn semester, got an opportunity to talk to the KTH alumni and exchange experiences, as well as getting some advice before moving to Sweden! Personal experiences from previous Thai students in Sweden were the best advice the newcomers could get.

The KTH representatives introduced the students to the university’s activities and answered questions from especially the new students regarding their future studies.

The students going to Stockholm for the 2015 autumn semester were shared with some insights and arguments for why studiying in Sweden is rewarding – and in many ways challenging:
–    Your ideas will thrive: When you study in Sweden, you’re encouraged to think independently, creatively and critically. At Swedish universities, the emphasis is firmly on developing your ability to question the status quo by accessing information, seeking new perspectives and coming up with well-informed opinions.
–    Sweden has a long and proud history of academic excellence and despite its relatively small population; it is home to some of the world’s best universities.
–    Sustainability is front and centre – with the environment to show for it. If you’re concerned with sustainable development for a greener future, you’ll find many kindred spirits in Sweden. Environmental issues are high priority here, and Sweden has been named the most sustainable country in the world for its use of renewable energy and low carbon dioxide emissions (it has the highest percentage of renewable energy in the EU).
–    Experience equality and embrace diversity. Swedish society is known for its inclusiveness and egalitarianism. You may have heard Sweden referred to as the most equal country in the world.
–    Gain a competitive edge for your global career. What is the most important characteristic you’ll need for success in your career? According to a global study of CEOs, it’s creativity. And creativity is exactly what studying in Sweden will encourage, along with other in-demand skills such as how combining theory and practice, and how to navigate complex situations where there’s no easy solution. Many degree programs in Sweden include internships, which are a great way to get real-world experience while you build your professional network. In Thailand there are close to 50 KTH alumni students. Those have studied various subjects at KTH, from Chemical engineering, sustainable energy, computer networks and molecular science, to real estate management, architecture, entrepreneurship and electronic power systems. KTH rankings byTHE (Times Higher Education)
• Ranked as the 126th best university in the world (2014)
• Ranked as the 52nd best university in Europe (2014)
• Among the purely technical universities in the world ranked No. 18 (2014)
• Among the purely technical universities in Europe ranked No. 9 (2014)