The HALO Trust and Norwegian People’s Aid (NPA)  signed recently a Memorandum of Understanding (MOU) with the Laotian Ministry of Labour and Social Welfare represented by the National Regulatory Authority for the UXO/Mine Action Sector (NRA) in Lao. The signing of the agreement was consequently on 7 May 2021 announced simultaneously by the governments of Norway and the USA.

“With the new MoU signing and the funding from the Norwegian government and the government of the U.S.A., Norwegian People’s Aid (NPA) will be able to clear 10 million sqm of land contaminated with cluster munitions and unexploded bombs,” says Ambassador Grete Løchen, Ambassador of Norway to Vietnam, who also oversees Norwegian diplomatic affairs in Lao PDR.

“I also highly appreciate NPA’s efforts to reduce its environmental footprint, train staff on gender and environmental awareness, and ensure a diverse and inclusive workplace for all staff members,” she adds.

With increased funding, both The HALO Trust and NPA will increase the pace of vital life-saving work to remove the threat of cluster munitions and unexploded bombs and bring socio-economic benefits to thousands of families in hundreds of villages in Attapeu, Champasak, Saravan, Savannakhet, and Sekong provinces. The increased U.S. funding is also providing new job opportunities and employment for over 460 people in The HALO Trust and NPA’s areas of operations.

Dr. Peter M. Haymond, the United States Ambassador to Lao PDR, reaffirmed his country’s commitment to supporting the UXO sector, saying “2021 marks the 5th anniversary of the U.S.-Lao Comprehensive Partnership established by President Obama and President Bounnhang.  Since 2016 UXO clearance has been an essential element of our partnership and has brought tangible results to the Lao people. I observed first-hand in the field, and I am impressed by the dedication of the UXO survey and clearance field staff. I am especially pleased to see many women working with HALO and NPA, not only contributing every day to solve the UXO issue, but developing skills and gaining leadership experience important for the future of their communities, and of Lao PDR.  We are very pleased to be joined by our friend and ally Norway in this effort.”

“Norway and Lao PDR enjoy particularly good bilateral cooperation in the areas of humanitarian disarmament, such as  the mapping and clearance of cluster munition.  We have cooperated closely with the Government of Laos since the beginning of the negotiation process that led to the adoption of the Convention on Cluster Munitions and we highly appreciate the important role of Laos in the establishment of the Convention.  NPA is a key and highly valuable partner for the Norwegian Government  at the operational level in Laos. NPA has a long history of survey and clearance of UXOs both in Laos and in the whole region, and also provides valuable capacity-building of national authorities.”

“The Norwegian Government sees a clear link between clearance of UXOs and poverty alleviation. Effective land release is a prerequisite for social and economic development. Therefore the new MOU between NPA  and the Lao Government is very important in terms of both predictability and efficient use of funds. I also highly appreciate NPA’s efforts to reduce its environmental footprint, train staff on gender and environmental awareness, and ensure a diverse and inclusive workplace for all staff members.” 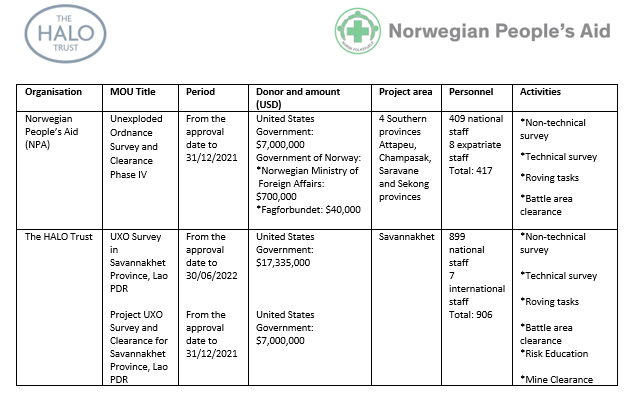 Clearance of cluster munitions and other UXO is critical to improving the lives and livelihoods of people living in Lao PDR, as projects conducted by the HALO Trust and NPA will benefit those most at-risk living in areas with the highest amount of contamination. This will allow Lao people to use their land without fear of injury or death from UXO.

Cluster munition contamination in Lao PDR is amongst the highest in the world when measured against the population, and extensive contamination poses a risk to the livelihoods, socio-economic development and quality of life of those living in affected communities. The U.S. Government and the Government of Norway have shown significant, ongoing commitment to assisting Lao PDR in reducing the impacts of unexploded cluster munitions and in meeting its obligations under the Convention on Cluster Munitions (CCM). This funding will support the development of the National Regulatory Authority for the UXO Sector (NRA) in their long-term management and regulation of mine action activities in Lao PDR.

Over 8,100 people are expected to directly benefit from activities approved in these MOUs in 27 districts across 5 provinces. A total of 17.6 million square meters of cluster munition and other UXO-contaminated land are set to be cleared and over 1,300 Lao people will be employed by The HALO Trust and NPA in 2021.