May 17 is the day Norwegians everywhere  celebrate their National Day. To add to the significance of the annual event, this year also marked the 200th anniversary of the Norwegian Constitution.

Between 150 and 200 Norwegians participated in the celebrations at The Ambassador’s residence in Bangkok. The programme included the traditional parade with flag bearers and quite an impressive turnout of both adults and children, wearing the Norwegian costumes. Later in the afternoon, there were community singing at the residence, speeches and games in the garden for the children – while the adults rounded up the afternoon in a tug of war. The Norwegian Ambassador to Thailand, Katja Christina Nordgaard, was very happy about Saturday´s event, and she underlined the importance of the celebrations.

“When we are so far away from home, it perhaps becomes even more important to come together on a day like this. It is a great reminder of our roots and heritage as Norwegians. You are allowed to feel proud of where you come from, and this day is a great excuse, “ she said.

The Ambassador believes that it is a celebration that brings strong memories from one’s childhood, so they try to make the event feel as much like what both the children and grownup Norwegians are used to from back home.

“Many, including myself, walked the parade in the traditional national dress, and the costumes are made of wool, so needless to say, it was hot.”

Katja Christina Nordgaard believes that Norway has a heritage to be proud of, both in terms of social and gender equality, solidarity and human rights. 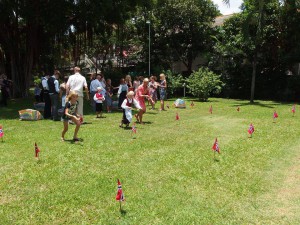 Sweden intervened and took control of Norway by force, but the constitution was embraced as a national symbol of freedom. The Swedish king was denied the right of veto over Norwegian affairs, and never got the authority he wanted; it culminated in Norway’s eventual independence in 1905.