I was very happy when I received an invitation from the Thai-Italian Chamber to attend  “The Education Forum 2022” that took place at newly renovated Montien Hotel Surawong Bangkok. I heard that this hotel has been existing for very long, but even if I have been living here 15 years, I have never been to this hotel before. The aim of this forum was to promote Thailand as an exclusive, innovative education  center in South East Asia and to create new educational trends, involing institutions and the private sectors.

Today Thailand is rarely seen as a country for higher studies, European students wanting to study in Asia rather look to Singapore and Hong Kong.

After a very nice, light lunch, there was a panel discussion between representatives of the international schools. As I have been teaching ECA (complimentary Swedish) in some of the International Schools in and around Bangkok, I was very interested to hear them talk about their view of education here in Thailand. Unfortunately only representatives from Patana, KIS, Bangkok Prep and Sasin School of Management participated in the panel. 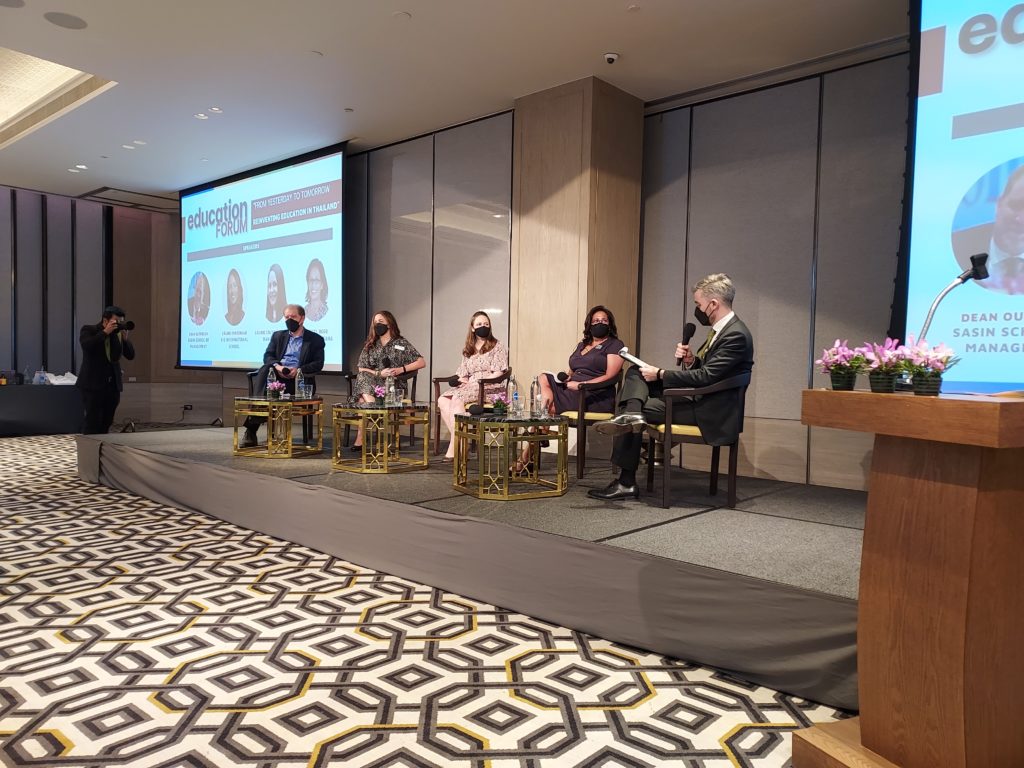 The Forum was opened and participants welcomed by the  Secretary General,  Signor Michele Toma from the Thai-Italian Chamber of Commerce, and was followed by a short speech by the Thai Minister of Education , khun Trinuch Thienthong. I must admit I had some difficulties to understand the Minister Khun Trinuch Thienthong’s English.

There were many different topics on the agenda and I was very impressed by the  panel, Mr. Dean Outerson, representing Sasin School of Management, Caline Fonteneau from KIS, Laurie Colyer Charusorn Bangkok Prep and Cheryl Rego from Patana. They were all burning for their schools and what they have achieved so far and future projects. Of course “sustainability”  was a main topic as well as “diversity” among much other topics.

There were questions about what the schools can do to help students who live with gender issues to become equally accepted. Another question that Mrs. Cheryl had to deal with was what to do when parents don’t want their children to be educated by a gay or lesbian teacher? She told us about parents, who refused to have their children in a class led by a gay or lesbian teacher.  Another issue, which surprised me, was that the schools nowadays can’t send out letters saying “Your son/daughter has been accepted to…” now they have to address the applicants as “your child”.

I also learned that several schools also focus a bit more on practical topics and not only academic topics today .KIS e.g. had brought with them an incredibly beautiful rocking chair made in one piece without any screws or nails, a real masterpiece by a 16 years old boy, one of many projetcs. My thoughts went to IKEA and what a trouble it sometimes is to put their furniture  pieces together, always missing screws or having too many and not knowing where they belong. This was a very well organised forum by the Thai-Italian Chamber of Commerce, even if I must admit that I was very disappointed that the Minister of Education did not show more interest and talked  about his way of looking at the Thai education system and the idea of improving the learning skills here in Thailand. The international schools all offered to support and improve the education of the Thai schools.

I have had my adopted Thai daughter in one of the international schools here in Bangkok and I must say, children who have had/have the opportunity to attend those international schools should be extremely greatful. They walk out into the real world with open eyes, with confidence and knowledge and of course fluent in English.  This is the best gift you can give a child. One Comment on “Thai-Italian Chamber hosting “The Education Forum 2022” on Thursday the 24th of February.”