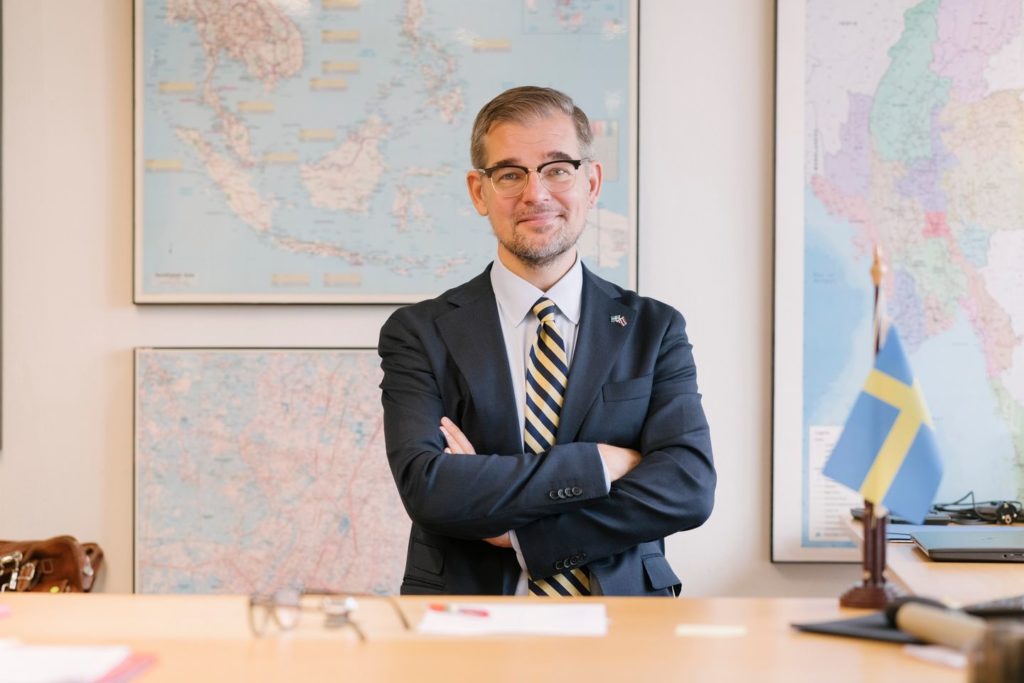 In this month’s newsletter to all Swedes in Thailand, Ambassador Jon Åström Gröndahl talks about how the devastating war in Ukraine is affecting us all while also providing an update on the Embassy of Sweden in Bangkok’s activities.

Part of the letter reads:

The Russian aggression, the war against Ukraine, affects us all. Especially those at home in Sweden. And sometimes maybe more than what we Swedes abroad realize. The proximity to the battlefield is palpable in Europe. Our common security order, the one we have taken for granted for many years, is under attack by Putin and his forces. The indiscriminate violence, the bombs, and the killing continue as I write these lines. Thousands of people have lost their lives, millions are on the run. Amongst us in Europe.

The war against Ukraine also affects the entire Swedish foreign service. We work together with other EU countries and like-minded people to inform about what is happening, to influence other countries to take a stand against the war. Russia’s actions are a clear violation of international law and a threat to international peace and security. The war against Ukraine is, therefore, a threat to us all. And the whole democratic world is now also joining forces for peace and a stand against war. European solidarity is clear, where we together take on the task of supporting Ukraine in various ways and influencing Russia through, among other things, sanctions.

I sincerely hope that the pressures of the outside world, including from Asian countries, can help shorten the war and put an end to human suffering. Developments in Europe have also made me think about what is happening in another immediate area, very close to Thailand. Of course, I’m thinking of Myanmar. I hope we can see the same solidarity with the Burmese people from its Asian neighbors as we see with the Ukrainian people from its European neighbors.

With regard to the embassy’s regular work, we continue to be affected by the pandemic and its consequences. Until this week, we have worked in shifts and, like most major workplaces, have had several of our own Covid cases. This makes work and planning more difficult. At the same time, we clearly see that the vaccines help, the course of the disease becomes easier to manage and symptoms are milder.

In Thai society at large, we also see relief in various restrictions. In a couple of weeks, a PCR test on the fifth day after arrival is no longer required. Further reliefs have also been announced from this summer. Thailand will then be easier to travel to and we expect more Swedes to take the opportunity to visit the country.

Another important visitor issue concerns the Thais who come to Sweden every year to pick different berries in our forests. Our migration section prepares as best it can for this year’s group and the permit management and other things required each year. The embassy also sees a large increase in the number of visa applications, which is a clear sign that travel is about to pick up speed again in Sweden as well.