Singapore FinTech Festival returned for its second year during 13-17 November 2017, with strong Nordic participation, including Danish and Swedish fintech delegations. Singapore is a financial hub and ranks as fourth on the Global Financial Centre Index 2017. 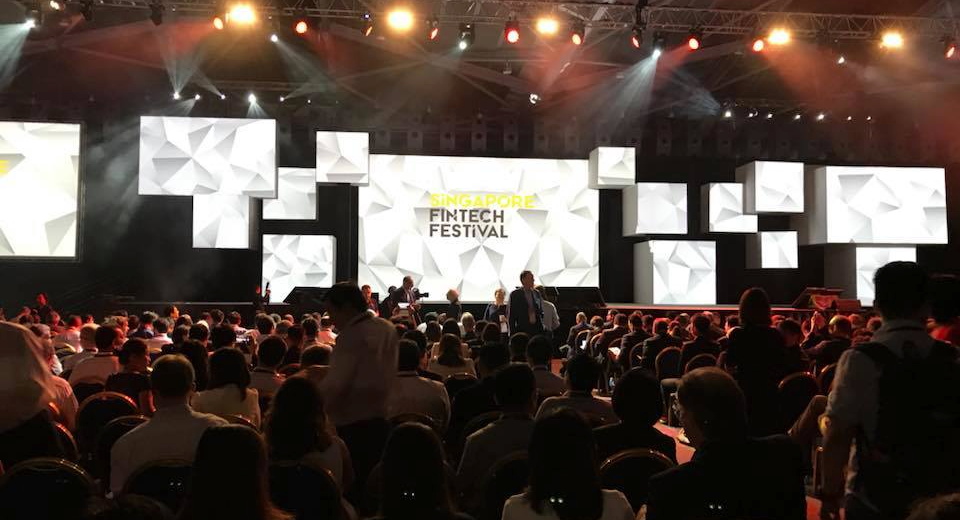 Singapore’s Monetary Authority of Singapore (MAS) organised this massive festival as a way for the City State to to benefit from Fintech (financial technology) – and learn from its peers. There, the many Nordic participants (including many start-ups) had access to a veritable smorgasbord, including workshops, a 3-day conference, an investor summit, an ‘Innovation Lab Crawl’, industry networking events, a ‘Hackcelerator’ as well as the Fintech Awards.

The Investor Summit ‘Deal Day’ (aiming to enhance access to funding for start-ups and improve the quality and quantity of Fintech investment deals in Singapore) showcased promising Fintech start-ups and innovative technologies to local and global investors.

In the Lab Crawl over 20 innovation labs across the island opened up for visitors with demos, tours, and exhibitions that had been prepared, enabling great opportunities to network and get to know more about the up-and-coming innovative Fintech solutions. Aleksi Grym talked about how the private and public sectors are working together to build an innovation-friendly and highly developed financial ecosystem. “When an industry is going through such a major transformation, the best thing to do is work together in close cooperation between old and new players as well as private and public institutions. I see many similarities between the Nordics and Singapore in that respect. Also, we want to make sure digitalization leaves no one behind. Financial inclusion and financial literacy are becoming increasingly important topics in the age of digitalization and we feel we have a role to play in that regard.”

As Head of Digitalisation Mr Grym manages the digital programme of the bank as well as various projects related to the digital transformation of the financial industry, covering topics such as Fintech, distributed ledger technologies, digital currencies, payment technologies, cybersecurity, and data analytics.

“Central banks around the world work together in many areas. I had met some of my peers from the MAS and through this cooperation the invitation came about. Fintech is an area of keen interest to both our central banks, and Singapore is one of the key locations for this activity,” he explained how this Nordic session came about.

At this stage there is probably collaboration or exchange between Finland and Singapore within Fintech. “But this would be mainly between commercial entities. As a central bank, we are not directly involved in the activities of Fintechs, but we want to encourage innovation in the financial industry,” replied Aleksi who was in Singapore to learn about the ecosystem as a whole and how the central bank and other public institutions can contribute to an innovation-friendly business environment.

His own current role is relatively new: “I started last year. The financial industry is transforming significantly, driven by digital technology. My job is to understand in more detail what the opportunities and risks are, who the new entrants are and what they are offering that wasn’t available before. I study new technologies and business models and try paint a picture of what the financial industry might look like in the future. This also means the role of central banks might be affected.” “The Bank of Finland has its usual tasks as a central bank to work with commercial banks. Beyond that, we find that learning about digital transformation is best done in close cooperation and continuous dialogue with the industry, so that we have a common view of the significance, risks, and opportunities of new technologies and digital business models. The Bank of Finland wants to act as a kind of platform for exchanging knowledge and insights about digitalization in the financial industry in Finland.”

When asked to comment on the ecosystem in Finland the Head of Digitalisation said: “Finland is a relatively small country but we are part of the EU and the Eurozone. The financial market in Europe is becoming harmonised so it makes sense to view Finland as part of a much bigger overall market. The Finnish population is also very tech savvy so that digital services are widely used in the country. We had some of the world’s first online banks and we have the highest mobile broadband usage in the world. Fintech companies in Finland often have an international mind-set from the very start. I would describe the Finnish Fintech ecosystem as relatively small but highly skilled.”

It is branded as the world’s first smart piggy bank. An app that connects with a physical, connected piggy bank, allow kids to learn about the concept of money by setting goals and reaching them. “We make digital money tangible by letting children making different wishes and having different goals in the app. Their parents or grandparents and other grownups can then transfer money straight into the piggy bank and each time the piggy bag lights up and plays sounds so the child has to go an physically interact with the piggy bank to put money into the system. Afterwards the child can distribute the money in the system between the different goals. So we are combining hardware and an IoT Piggy bank with an app and an integration into a real time bank account,” Søren Nielsen (founder and CEO) explained.

And he emphasise the purpose of the concept: “It’s four financial literacy, for children the age of 4-10, when they can start understanding the value of money. But in a society like the Danish, and the same goes for Sweden, where everything is going cashless we have an issue with not having cash anymore. So Ernit gives the children the ability to understand digital money but still having a physical presence. When we talk to experts about this it is, the first part of it is that money has to have a physical presence. That is why we need physical piggy bank; when children can use their touch, seeing and hearing senses the better the whole learning experience gets.”

“I am totally into he convenience of cashless society, I never have cash myself, I use mobile pay from my phone and the credit card but I can see that this has big consequences, especially for children. Because they don’t understand where the money comes from. My daughter calls my credit card the ‘magic card’ because she doesn’t see the link to money. She just thinks that with this card you can just pay. That is where we are trying to use money as an instrument to teach children about delayed gratification, about they to spend time on reaching their different goals and also on work at home, by doing the different tasks such as collecting the trash to get to the different goals.” 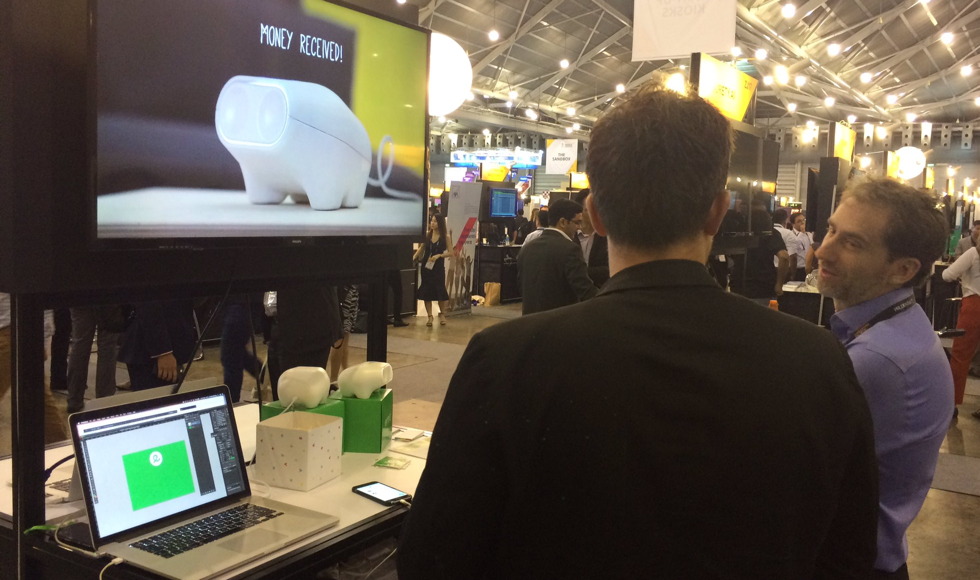 Ernit was one of 20 shortlisted fintech start-ups participating in Singapore’s 12-week virtual programme, where they were matched with industry champions to customise their market-ready solutions into contextualised prototypes ready for adoption.

As the ‘Hackcelerator’ was virtual Ernit worked from Denmark during the programme, have mainly working in collaboration with Standard Chartered Bank, with the focus on connecting Ernit’s system to the one of the bank.

“Oracle has also been involved with the technical setup. So the main goal has been the collaboration between different companies in making something that actually works and can be tested in the Singaporean market.”

Søren had previously never been in a virtual accelerator and concludes that it has been great. “It worked far better than I thought so the outcome of this has been way bigger than I could have hoped for. I think it is difficult working from a distance with people. Even you are working with software and technology it is difficult because it all comes down to communication, which is way easer when sitting across from each other and being able to read each other’s body language. And this was all of course over the phone, not having visuals.”

Standard Chartered bank were among the industry champions in the accelerator, aside organising KPMG and MAS. And already the day after Demo Day they had a follow-up meeting today to plan for actual adoption and integration of their solutions into a real client context.

“We are coming back to Singapore for further meetings with Standard Charter, and the same goes for many other banks, and investors too, who have reached out to us as well.”

“The big goal on the side has been the pitch competition that we were a part of. So making the pitch ready and going out in front of an audience of several thousand and pitching our value proposition have been a big part of the 12 weeks as well.”

“I had five minutes on stage in front of all these people and the outcome was a fantastic experience for me personally and for the company as well being at that venue and see all the different cameras coming and taking photos of the piggy bag. It is really nice to have a physical hardware object in the fintech space; we are the only ones having that.”

Three winners that were picked from across four categories got 50 000 SGD each among the selected finalists (the Danish finalist being within the ‘Customer-facing’ category). Unfortunately Ernit was not one of them. “I like to win all the things I am a part of so for that part I am kind of sad. But we met a lot of other great start-ups and got some fantastic feedback from the audience. We had some many people coming, to see the piggy bank, and to how they can get it, how it works etc. So we’ve received got tremendous response out of this,” concluded Søren.

Fintech in the real world – it’s happening in Asia