On 14 November Thammasat University gathered the media as well as various university representatives to announce the official delivery of Husqvarna’s (Sweden) Robotic Automovers to be used for the upkeep of the football field lawn at the Bangkok Campus.

Mr Surakom introduced the product and Spica company, as two Huqvarna Automovers (450X) were delivered to Thammasat as the first university to install such automovers in Thailand. This product is branded as the world’s smartest robotic grass mower. It can be controlled from a smartphone and perfectly cuts the lawn, achieving a beautiful and carpet-like look.

The two models will be enough to manage the football field’s 8,200 square metres.

Dr. Prinya explained that the procurement was not just about showing robotics in use but as part of Thammasat’s efforts of fully becoming a smart university. “And that consists of three things: First, people; it was the university for the people from the beginning, with the slogan: ‘The university where we learn to love the people’. We teach and let students think about how to help others and not only think about themselves. Second, the environment. People and environment forms sustainability. The third thing is smart technology, like smart phone and wireless technology, information in the cloud and so on. These three things is what becomes a smart university.”

The Professor told ScandAsia that he has held this new role as Vice Rector for Administration and Sustainability for two years, being the first university in Thailand having implemented such a position. Thammasat was first trying to become a green university, and has developed the green campus since seven years ago. But after attending the International Sustainable Campus Network conference five years ago at NUS in Singapore, Thammasat decided to develop from a green to a sustainable university.

“If we talk about green you only think ‘environment’ but with sustainable you also think of people and society. “

Mr Surakom from Spica explained that the university had found them, while searching for automovers. They had been looking for a solution. And the Professor found the auto movers in Europe, and then he came back and did the research and found us.

“And we have been through a few meetings, demonstrating the product and participating in doing the calculations for the carbon credit; how much they can reduce, cost savings and all those things. Then they decided to go for it.”

“Thammasat is the first university in Asia to use automovers to maintain their football field. This is also the biggest lawn area where we have installed Husqvarna Automovers.” Husqvarna has during 20 years of development refined its mower concept to achieve the highest level of reliability, quality and cutting result with a minimum of assistance.

Aside private residences hotels and sorts are also targets for Spica for this robotic Husqvarna product. 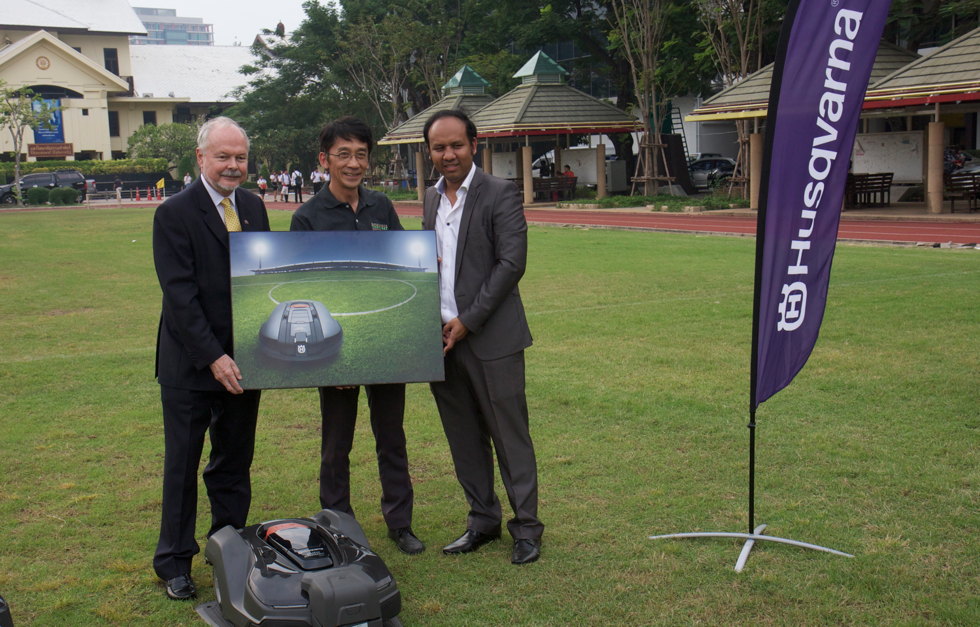