On Friday 10 March the Swedish flagship brand Scania bus was again occurring in Thai media for the wrong reason. Media reported that a double-decker coach had plunged into a ravine in Prachin Buri, during a school field trip killing six people and injuring 44 others. The bus was marked as a Scania and was badly smashed as it landed 20 metres below the road in the ravine.

Scania Siam Co., Ltd. in Thailand issued a letter regarding ‘The fact of the tourist bus accident at Prachin Buri, Thailand’, first expressing their deepest sorry for the loss in the double-decker coach accident that killed two students and four teachers and injuring 44 others at Na di district of Prachin Buri.

“The news have been released that the accidental tourist bus is “a blue Scania tourist bus” or “a blue Nissan-Scania tourist bus”, license number 30-1027 and registered in Ubon Ratchathani”. The picture in the news showed SCANIA logo in the front of the accidental coach and the unskilled driver faced with a break system problem at the moment cause to the accident,” wrote Scania Thailand and continued explaining the fact about the bus and coach feature in Thailand that separate into two types as following:

“The original manufacturer chassis consist of the main parts of bus such as engine, gear box, rear axle, break system, wheels and etc. together with the approved document from manufacturer and Thai Industrial Standards Institute.”

“The local modified chassis is the chassis that built up by used parts or the second hand parts from any second hand store and stick them together into chassis (Reference in a TV variety ‘Kob nork ka la’ chapter ‘how it turns into a coach’. This means that local, modified chassis can be built using different parts of brands and cover with the body that also could be painted into any brand.” 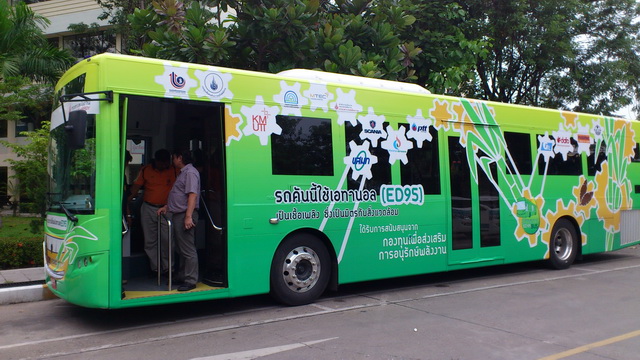 “Scania Siam Co., Ltd. has deeply explored the facts and we found that this accidental blue tourist bus is not a Scania chassis but it is a local, modified tourist bus. Scania is a global brand since a long time and we are very famous in safety, hence, this accident has caused misinformation and discredits relating to Scania’s reliability and brand image. It is also affecting our customers who are using Scania chassis.”

“Scania would like to gently ask for your kind consideration and support by expressing this fact to the people as the right justice for Scania Siam and the business owners who are using Scania chassis.”

“In my opinion if modified bus chassis are allowed to run on the road, we can’t reduce the number of bus accidents,” added Thasanan Piyaaksornsak, Marketing and Communications Manager of Scania to ScadAsia.