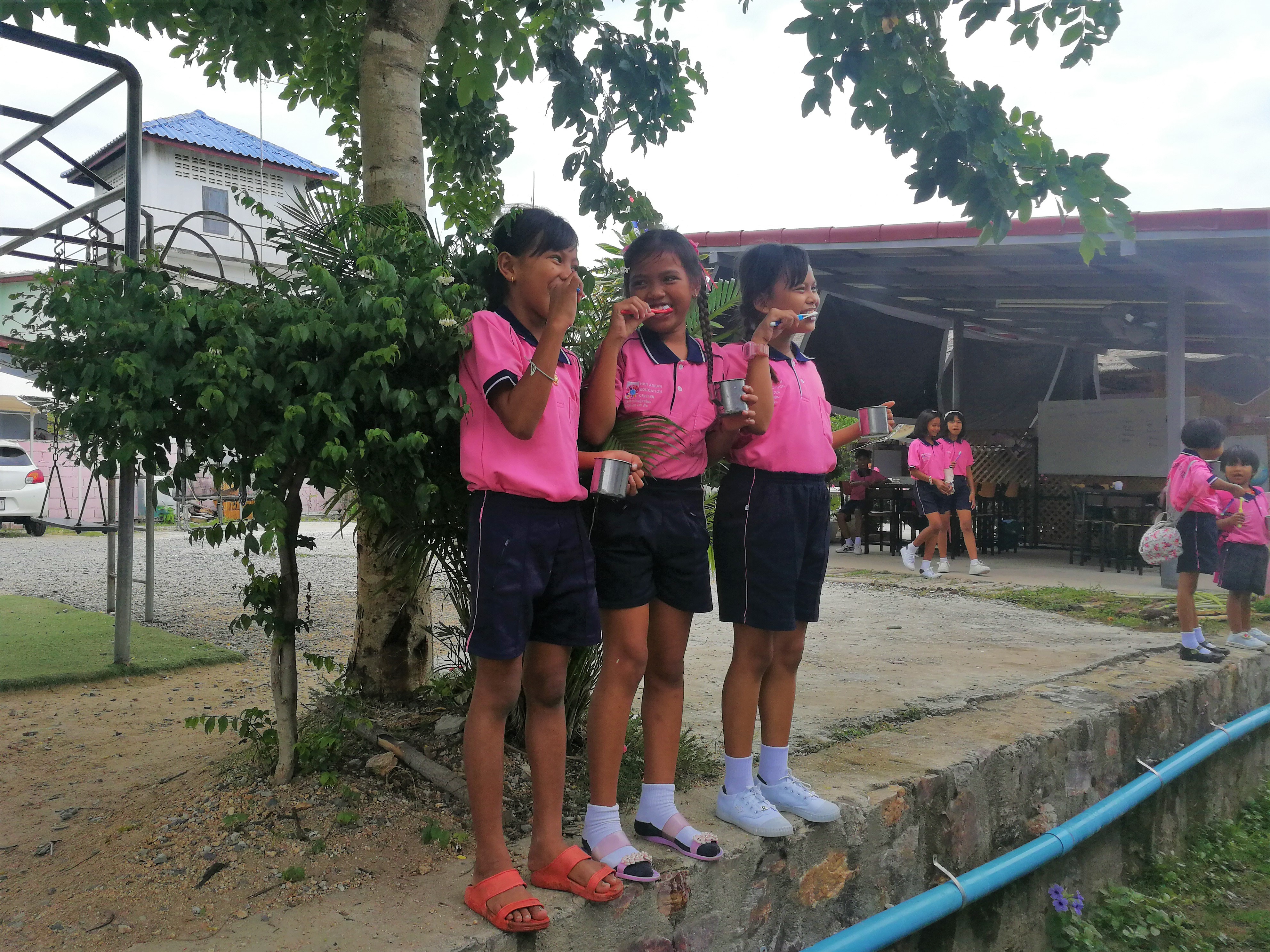 Upon entering the big, pink building, several small heads turn to look at me. Some of the children giggle and some put their hands together in front of their chest and bow their head in the traditional Thai greeting known as Wai. They are all wearing pink uniforms.

The colour gives a feeling of having entered a happy place with lots of love and warmth. And that is exactly what the HHNFT Drop-In Center is supposed to be.

It is a centre for migrant children. About 80 percent of the approximately 90 children are from Cambodia. The remaining are mostly from Myanmar.

“A lot of migrants come to work in construction sites in Pattaya. Some bring their children to work, but it is not a safe place for children,” says Siromes Akrapongpanich.

“Some children stay in the campsites (where the migrants live) during the day but there they are in risk of abuse or even trafficking. And they don’t get any education.”

The real purpose of the HHNFT Drop-In Center is to provide a safe space for the children to develop.

“Some of the children are only at the centre for a couple weeks before they migrate so there is a constant turnover with new children every week. Therefore, we have to start from the beginning all the time,” Siromes Akrapongpanich tells me.

“The important thing is to show them, that they can be what they want. They are brilliant children and they really embrace everything.”

Many of the children have never even gone to school, so it’s almost impossible to follow a standard curriculum as age and knowledge do not go hand in hand.

“But the children are very proud to be here. To them it is a school, not a centre,” says Siromes Akrapongpanich.

Fortunately, other organisations have started copying the HHNFT or made their own program to help. In the business of helping children there is no such thing as competition, so Siromes Akrapongpanich is only grateful when other people focus on the issue.

A helping hand from Denmark

Siromes Akrapongpanich’s dream is to expand the centre with new buildings allowing for a larger intake of migrant children. And it might just be realistic in the future.

The assistant director recently came back from Denmark, where he met with Kasper Nesager-Hansen, chairman of the Danish association Netværk for Adoption & Børnehjælp (Network for Adoption and Child Help), NAB.

As of now, NAB is newly started and thus can’t help much but the plan is that it becomes a link between Danish donors and HHNFT.

For Christmas in 2018 for instance, NAB was asked for help in donating presents for the children.

“There isn’t enough money for both presents and food for the children. It might seem trivial or even abundant to buy presents but giving these children a Christmas present has a huge effect on them. It means a lot to have a happy memories from your childhood,” Kasper Nesager-Hansen says.

He elaborates that a bond between Denmark and Pattaya dates back to pre-HHNFT times when the American Priest Father Ray started helping Thai children in the 1970’s. Denmark was one of the main donors and the connection to Denmark is therefore traditionally strong. Later, the organisation split and HHNFT is one of the outcomes.

When NAB was hoping to collect the equivalence of about 15,000 Baht Kasper Nesager-Hansen could almost not believe his own eyes, when a full 55,000 Baht were collected for presents.

“It indicates how strong the bond is between Danish donors and the network in Thailand,” Kasper Nesager-Hansen says.

While it is not the ultimate goal to give the children an academic education at the HHNFT Drop-In Center, Siromes Akrapongpanich does consider one thing very important apart from learning Thai and English for communication.

“The children must learn what is safe versus harmful touching. Many don’t learn this, but it is important that they can tell right from wrong in the campsites,” he says.

“Next, they learn basic communication skills and sanitation.”

The children eat lunch inside, which is what Siromes Akrapongpanich believes to be the only meal most of the children get during the day. Therefore, the plates are filled with large portions and the children are free to help themselves to more food.

Today, they are having Pad Krapow Gai with omelette and watermelon for dessert.

The children help serve the food and afterwards they take turns cleaning the dishes.

Outside, next to the open class rooms, where donated school bags hang on the chairs, a few girls are brushing their teeth and others are showering. Older children help dry and powder the younger children. It’s all part of the learning goals. Staying clean and being helpful towards others.

The centre has even proved to have another unforeseen benefit.

The children are also encouraged to meditate daily to learn how to stay calm and energised. 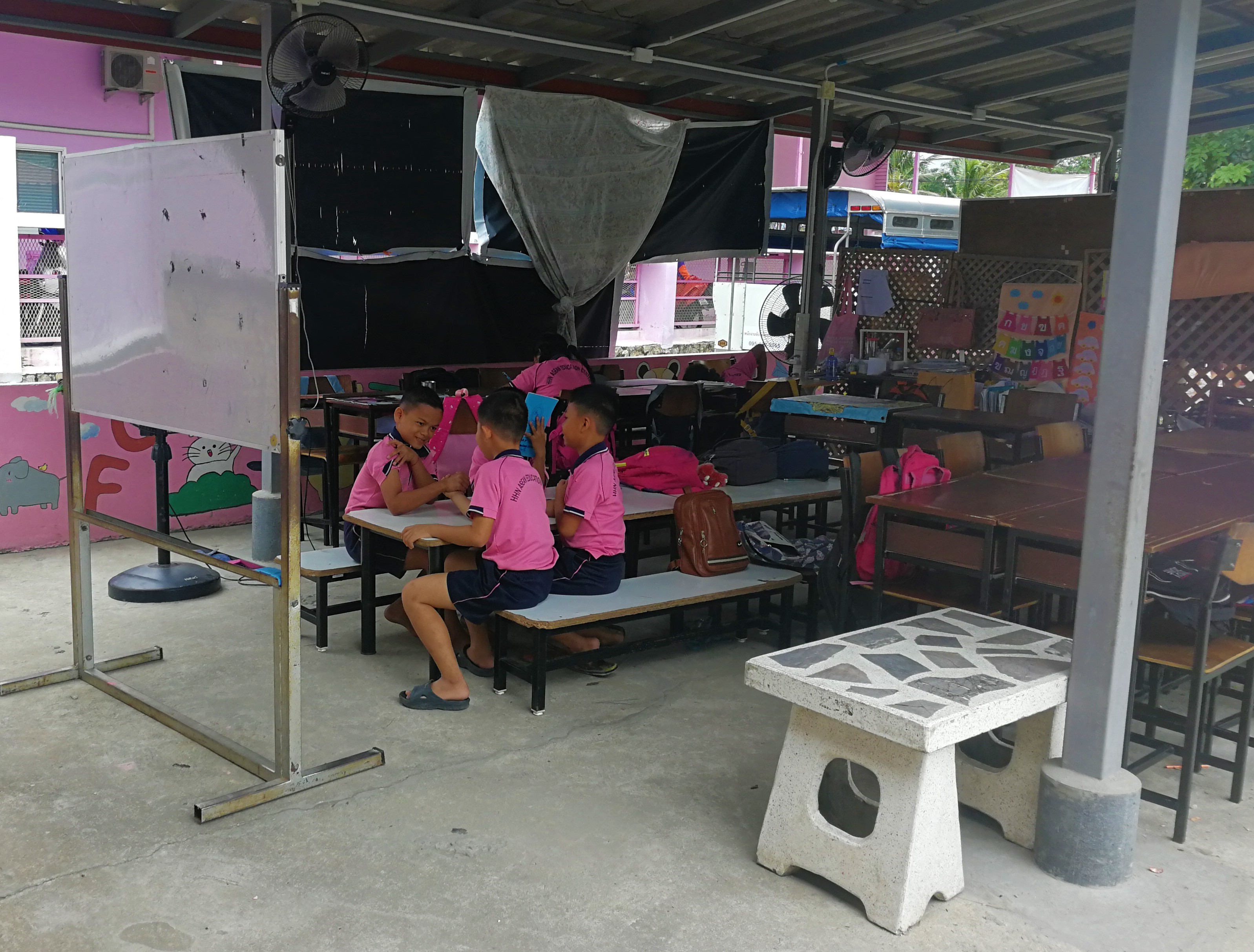 Learning with the kids

After visiting the Drop-In Center, Siromes Akrapongpanich takes me to another project by the HHNFT – the Child Protection and Development Center (CPDC), a shelter for abused children.

On the way he tells me, why he chose to start working for the HHNFT about a year and a half ago.

Siromes Akrapongpanich used to be a flight attendant but he started dreaming of helping people. Since he started working for the HHNFT he feels that he has found his call.

He has two kids of 4 and 6 years so helping children achieve a better life is very near to his heart.

And he also grows personally from it.

“Working with children you constantly have to think about what you say and how you act because they copy you. So, if you tell them to have patience, it is important to be patient yourself. You can’t yell at someone that they should be calm,” he says.

We arrive at the CPDC, where the children mostly come from Pattaya or nearby villages. Most of them have been sexually and/or physically abused.

At the shelter, they get a break from a rough life. They can play sports, get new friends and even do agriculture and get funds for an education. There is a gate, but Siromes Akrapongpanich says that it is open, as the shelter is not a prison, so the children can leave if they wanted to.

“If you keep people captured, they will try to escape. By keeping the gate open and saying that they are free to leave, they won’t do so. It has never happened.”

The shelter is almost self-supplying as they grow their own vegetables and have their own egg-laying chickens, ducks, pigs and crickets.

The children help with the crops once in a while and if something goes wrong or they fail something, it doesn’t matter.

“It is all about the process and not the outcome,” Siromes Akrapongpanich says.

“These children have to learn that it is okay to fail at something and that they will not get punished if they make a mistake.”

Most of the children are at school in the local area, but there is one woman at home, when I visit. When the children turn 18 they can choose to leave or stay as they no longer need permission from their parents. 23-year-old Tee has decided to stay because CPDC has become her home.

When she arrived just before turning 17, she was scared of leaving her father and brother in her home village for the CPDC. Now, she is scared to leave the CPDC because it has become her new home.

“In the beginning I was scared, but I gradually started feeling better. Now I feel safe here. It is like one big family. I am scared to live on my own now,” Tee says.

But she got her bachelor’s in biological agriculture, and now she is going to Australia for three months to improve her English.

There is no doubt, that he is very passionate about the cause. As are the other employees.

“No one is here for the money, because then they would be disappointed as there aren’t a lot of money in the business. They are here because they have a good heart and they want to help.”

Siromes Akrapongpanich does not promise to provide a sustainable solution to the never-ending problem of crimes against children. Last year, in 2018, the shelter celebrated its 10 year anniversary, but even after helping about 300 children throughout the period, there is no sign of such crimes decreasing in the community.

When asked about what the ultimate goal is for HHNFT, Siromes Akrapongpanich therefore has a clear answer.

“That we do not exist. When children are not being abused anymore, there is no need for us.”